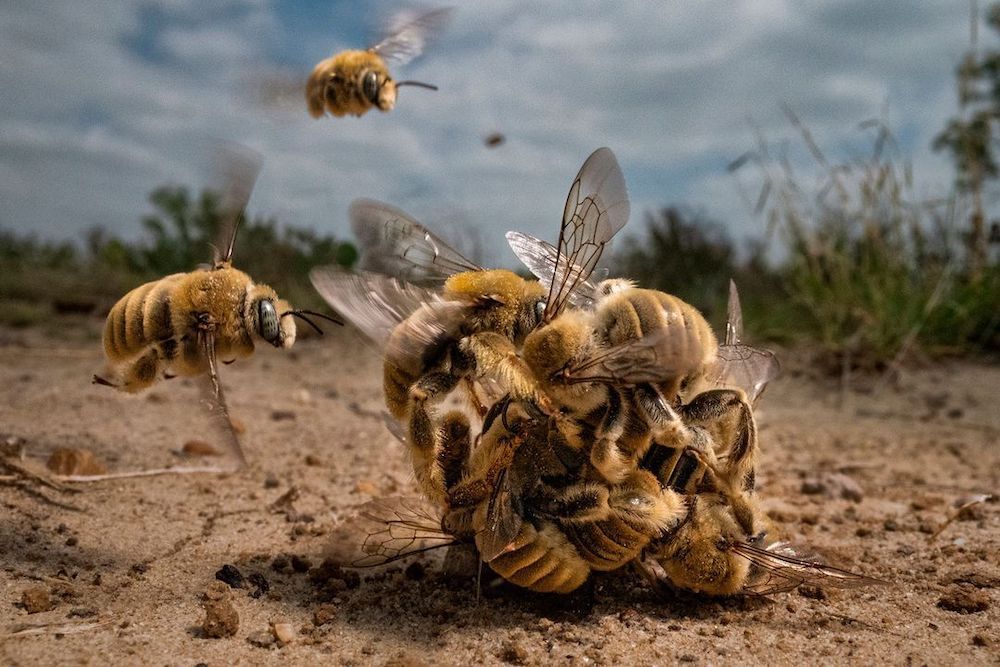 The winning images in the 2022 BigPicture Natural World photo competition have been announced with US photographer Karine Aigner taking the Grand Prize for her photograph Bee Balling.

Entrants in this year’s contest were invited to submit images that showcased life on Earth and illustrated some of the many threats that the planet faces.

Images from this gallery were originally published in bioGraphic, an independent magazine about nature and conservation powered by the California Academy of Sciences, and media partner of the BigPicture Photography Competition.

Karine Aigner’s Bee Balling image was shot in Texas, USA, and is a close-up shows the rare moment of Diadasia rinconis (Cactus Bees) swarming together in a so-called ‘mating ball’, with each male anxious to become companions with a female. Cactus Bees are native to America and are considered a solitary species, meaning they live without the hierarchy and structure of their European counterparts – though they still work to pollinate cacti and help plants in the American southwest to thrive.

Batstars encompass a lifeless sea lion at the bottom of Monterey Bay. While this scene appears melancholic, rest assured the sea lion is giving back to the community with which it once swam. When the batstars have had their fill, any number of creatures big and small will be able to derive energy and shelter from what’s left behind for years to come.

Once nearing extinction, the European Beaver population now flourishes under new protections, allowing for renewed photography opportunities. However, this beaver’s presence is not the only moment that makes this shot special – a spider on its web clings to the nearly-gnawed-through tree, making for a spectacular, if short-lived, scene.

Winner – Frame Within A Frame by Sitaram Raul (India)

A fruit bat majestically makes its way to a custard apple tree for a feast, finding itself perfectly placed within the opening canopy. It’s no coincidence that the framing is so precise… Sitaram Raul spent nearly three weeks observing the behaviour of these bats as they frequented the fruit tree, learning their habits and finally capturing this photograph when the moment presented itself.

Winner – The Hidden Beauty Beneath Our Feet by Tom St. George (Mexico)

Landscapes, Waterscapes and Flora category winner, The Hidden Beauty Beneath Our Feet by Tom St. George

In taking this photograph Tom St. George wished to highlight the incredible natural beauty found in the underwater cave systems of Mexico’s Riviera Maya, but also to draw attention to threats to its fragile ecosystem. Even though these caves are an important part of the aquifer, they are under increasing tourism pressures leading to the over-development of the region. A large-scale rail link across the whole of the Yucatan Peninsula is currently in the process of being built, putting both jungle and caves in danger; as well as potentially displacing local Mayan communities.

A tragically beautiful tapestry of insects – inadvertently killed after being drawn to an outdoor lamp with an unintentional opening. While cleaning the light, photographer Pal Hermansen discovered a veritable treasure trove of dead insects and decided to create this collage demonstrating the expansive, if overlooked, diversity of small, winged insects.

While travelling in Romania’s Carpathian region, Bence Mate happened upon frogs being hunted at spawning time. After their legs are removed for consumption, the frogs’ remains are thrown back into the water – a horrific swirl of spawn and viscera, expertly composed into a heartbreakingly tragic scene.

This image was shot in Sanjay Gandhi National Park, Mumbai, India. In Mumbai, it’s not uncommon to come across a big cat. Here, there is a unique relationship between leopards and humans, developed thanks to the efforts of the indigenous Warli community, the Maharashtra Forest Department, and local citizen groups. For many years, they have cultivated awareness around these creatures in order to help craft a careful co-existence. Though incidents occur, Nayan Khanolkar hopes to demonstrate that a harmony can exist between human and non-human animals.

See the dramatic Scottish Nature Photographs of the Year

The Best Cameras for Wildlife Photography 2022