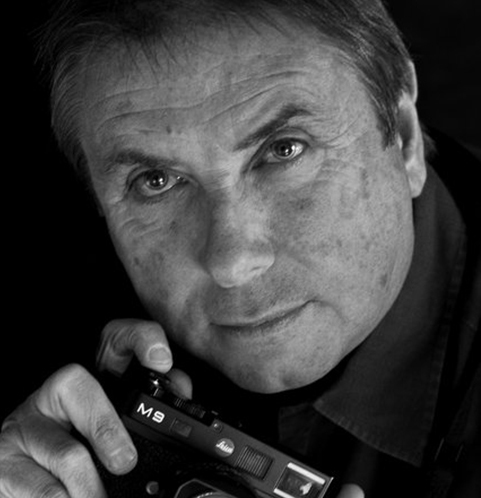 We are deeply saddened to report the death of Tom Stoddart, one of the finest documentary photographers and photojournalists the UK has ever produced. Tom, 68, died today after a brave struggle with cancer.

His family tweeted: “Tom touched the lives of so many as a brilliant, compassionate, courageous photographer whose legacy of work will continue to open the eyes for generations. He gave voice to those who did not have one and shone a light where there had been darkness.”

Tom began his photographic career on local newspapers in his beloved North East, before moving to London and building a solid reputation as a photojournalist, most notably for his coverage of Desert Storm. He really made his name, however, with his images from the frontline of the civil war in the former Yugoslavia (he was seriously injured by Serbian artillery while covering the siege of Sarajevo in 1992).

His image of Meliha Varešanović, below, striding defiantly down ‘sniper alley’ in the city is now the stuff of legend.

Other notable projects included the famine in Sudan, which generated a particularly harrowing image of a local taking food from a starving child.

Then there was an award-winning photo-essay on the tough training endured by Chinese child gymnasts (below) and coverage of the HIV/AIDS pandemic affecting sub-Saharan Africa, which won the POY World Understanding Award in 2003.

Tom also won Larry Burrows Award for Exceptional War Photography that year, for his coverage of British forces fighting in Iraq. His first major exhibition in London in 2012 attracted nearly a quarter of a million viewers and he received our Exceptional Achievement Award at AP’s awards in 2020.

“Tom’s work first came to my attention during the mid-1990s through his powerful and moving images of the siege of Sarajevo which were the subject of an exhibition called Edge of Madness at the Royal Festival Hall,” said AP editor Nigel Atherton. “A couple of years later, as Features Editor, I chose his harrowing image of a man stealing maize from a starving child during the Sudan famine as my Picture of the Year. It’s a title that really doesn’t do it justice – it was one of the pictures of the century and to this day I still don’t think a better photo has ever been taken that so graphically conveys the injustice of the world we live in.

Despite the number of truly great images that he created Tom remained modest and down to earth, a man motivated not by the desire for personal glory or self-aggrandisement but by an interest and curiosity about the world and a desire to shine a spotlight on its injustices. He was truly humbled when in 2020 Amateur Photographer gave him our Exceptional Achievement in Photography award (having already won our Power of Photography award back in 1999 for his Sudan images) but it was really no less than he deserved. Tom will be remembered as one of the all-time greats of photojournalism, and one of the true gentlemen of his profession. It was a privilege to have known him.”

Deputy Editor Geoff Harris added: “Like McCullin, Larry Burrows and Philip Jones Griffiths, Tom came from the finest tradition of humanitarian photojournalism – he was tough, brave and totally dedicated to his craft, but was always ready to help younger photographers or journalists in interviews.

He had a wonderful attitude. I once interviewed him and stupidly managed to erase the recording. When I called him back, deeply embarrassed, he chuckled and replied “don’t worry about it. I rarely get upset about little things any more’ and we did the interview again. Everyone who met Tom was touched by him and his photographic legacy will surely be celebrated by future generations.”

Meanwhile features editor Amy Davies, who worked with Tom on several articles, added: “My overriding memory of Tom will be having the privilege of sitting next to him at the most recent AP Awards. There, he was awarded the Exceptional Achievement in Photography award, rightly receiving a standing ovation from the gathered guests. He was there with his beloved wife Ailsa, and both beamed throughout the event. He thanked me for my contribution in getting this award to him, a reflection of his humility – really, with a back-catalogue such as his, it was an inevitability.”

“In 2000 I was privileged to join the Independent Photographers Group photo agency which Tom was part of. For some unfathomable reason, he took an interest in me and my career. He’s been a constant guide since, edging me onto that path, away from others and personally walking me down some.

As a source of inspiration, Tom’s photograph of Meliha Varešanović walking proudly and defiantly to work during the siege of Sarajevo hangs outside of my daughter’s bedroom.

She met Tom as a kid and I was hoping she would meet him many times as an adult. I’ll make sure she knows everything about him.

He was never a father figure, far more than that… he was to me and I suspect many others, a ‘godfather of photography’ figure. He once modestly remarked: “Pete, there’s no such thing as a guardian angel. There’s stupidity, experience, and luck, and I got lucky, very, very early.” I am very, very, lucky to have known him and utterly devastated to have lost him.”

Watch out for a fuller obituary in Amateur Photographer magazine soon.