Reckless Drone Pilots Cause the Destruction of Thousands of Bird Eggs 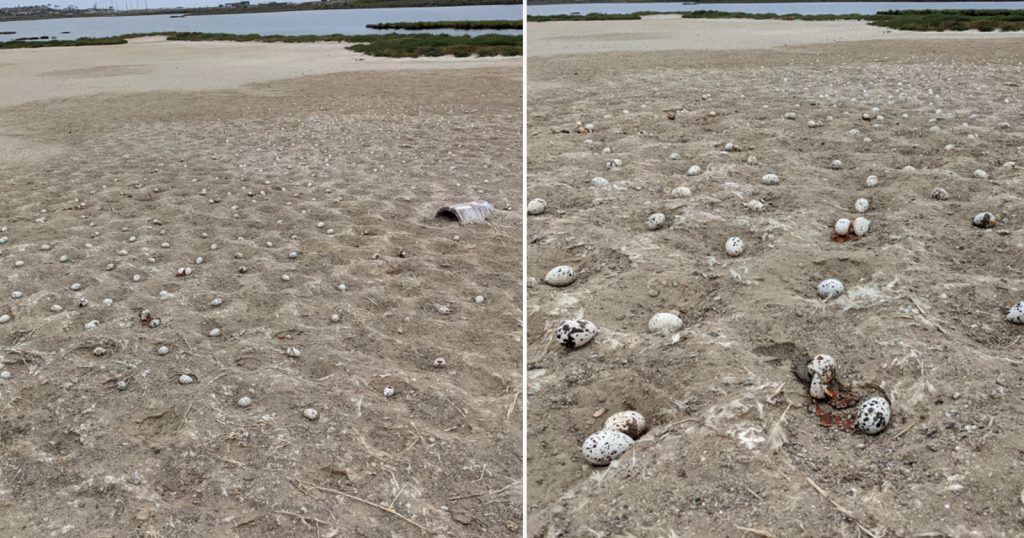 Drone pilots are being held responsible for the destruction of thousands of elegant tern eggs, a bird that nests on the Bolsa Chica Ecological Reserve in Southern California. Drones are not allowed in the area, but that did not stop a pair of pilots from flying and crashing into the fragile ecosystem.

Described as a “graphic display of vandalism,” the photos shared by the Bolsa Chica Conservancy show the harrowing aftermath of the drone crashes into the protected beach area.

“A couple weeks ago, thousands of Elegant terns were lost when two drones crashed by Tern Island,” the organization writes. “It is believed that the nesting terns left the eggs when they were incubating in response to the threat that the drones posed. This has never happened at such a large scale at the reserve.”

As reported by ABC7 News, COVID-19 has led to more people taking part in outdoor recreational activities and it has nearly doubled the visitors to the area over the last year. And while human visitors are welcome, dogs, bikes, and drones are not.

A couple weeks ago, thousands of Elegant Terns were lost when 2 drones crashed by Tern Island. It is believed that the nesting terns left the eggs they were incubating in a response to the threat that the drones posed. This has never happened at such a large scale at the reserve. pic.twitter.com/IcGhBZMtOR

According to the Bolsa Chica Conservancy, two drones crashed into the tern nesting area and the pilots added to the disruption and destruction when they went to retrieve their drones. During the calamity, three thousand elegant terns left the area and their eggs unprotected. While the drone and the foot traffic undoubtedly damaged some eggs, the lack of protection from adult elegant terns left thousands of eggs open to predators such as gulls.

While the California Department of Fish and Wildlife was able to find and cite one of the offending pilots, the other was not able to be located. Regardless, the loss of life and the destruction cannot be brought back from citations and fines. Additionally and sadly, while covering the story, ABC7 camera crews counted two more drones flying over the area in just a 10-minute span.

Unfortunately, while takeoff and landing in an ecological reserve is prohibited, some pilots skirt local laws by flying in from a legal area and then flying out in order to land. Such pilots do so with no regard for natural habitats and can cause untold damage as illustrated in the photos above.