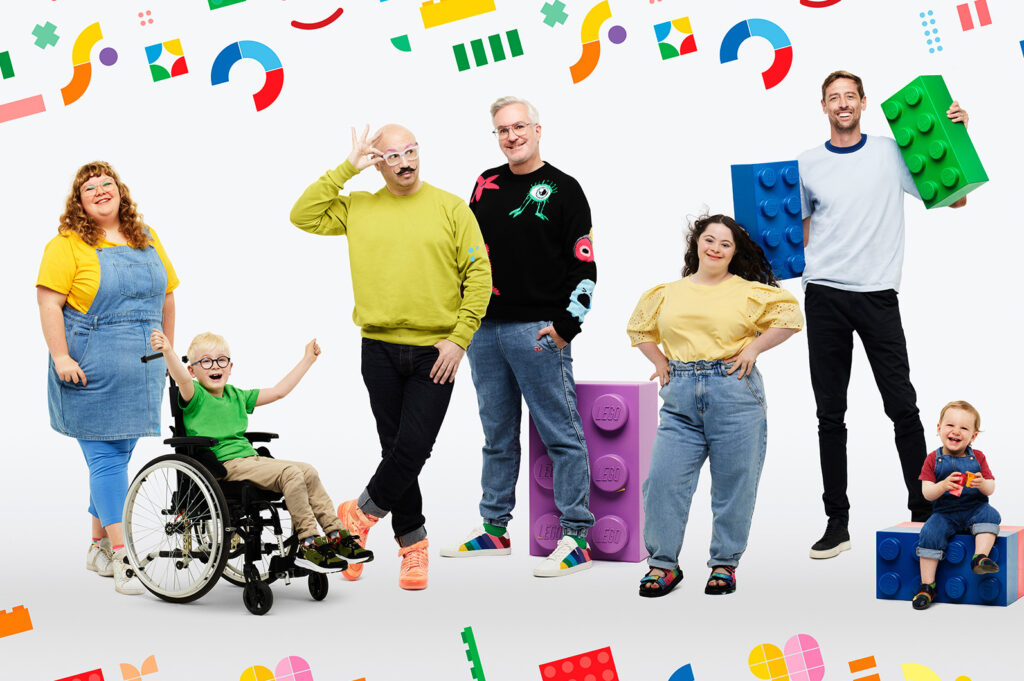 To mark the iconic toy LEGO’s 90th anniversary Rankin has photographed a line-up of UK LEGO fans, aged from one to 90 years.

Hundreds of fans shared their stories of what LEGO play means to them to be in with a chance of being photographed by Rankin, who is best known for his fashion photography and celebrity portraits.

The ‘1-90 portraits’ can be viewed at LEGO: 90 years of play and are also being displayed on outdoor media in Manchester, Glasgow and various London locations for the next two weeks.

The line-up includes LEGO lovers from around the country, from 8-year-old Boaz and his grandpa Paul to 11-year-old Elijah, who enjoys creating fantasy worlds, and 45-year-old Kev Gascoigne of Fairy Bricks (a charity which donates LEGO sets to children’s hospices and hospitals).

Photographer Rankin said, ‘I’ve captured some playful photography in my time, but this campaign has been a truly special one to be involved in. There aren’t many brands who have stood the test of 90 years, have fans across all ages and which still manages to excite and inspire people across the world to be creative every day.’

Peter Crouch revealed, ‘LEGO play has always been in my life. From a young age I’d build football stadiums – little goals, bricks to make the lines around the edge of the pitch and mini-figures as players for the match. Now, as a dad of four, LEGO building is firmly back in my life and everywhere in our house. My kids love to build – it’s something they’ve all been into at one point or another.’

They form just one element of a whole summer of celebration for 90 years of LEGO play, including the (re)opening of the world’s biggest LEGO store in Leicester Square on The LEGO Group’s 90th exact birthday, 10 August 2022.

Kev Gascoigne is from the charity fairy Bricks, which donates LEGO to children’s hospitals

The story of LEGO

In 1932 a Danish carpenter, Ole Kristiansen, crafted a line of small wooden toys in his Billund, Denmark, workshop.

His first collection had a modest 36 items that included cars, airplanes, and yoyos, all carefully crafted to help local children learn about the world.

In 1958, 26 years after Ole made his first wooden toy, his son Godtfred patented the LEGO brick we know today, with its interlocking tube system offering endless creative building possibilities.

The LEGO name is derived from the two Danish words, Leg Godt, which mean ‘Play Well’.

Frederica Barclay is one of the LEGO fans photographed by Rankin

Toy of the century

Since then, the LEGO brick has become both one of the World’s biggest brands and most popular toys, even being named Toy of the Century in 1999.

Its products are now sold in more than 130 countries worldwide.