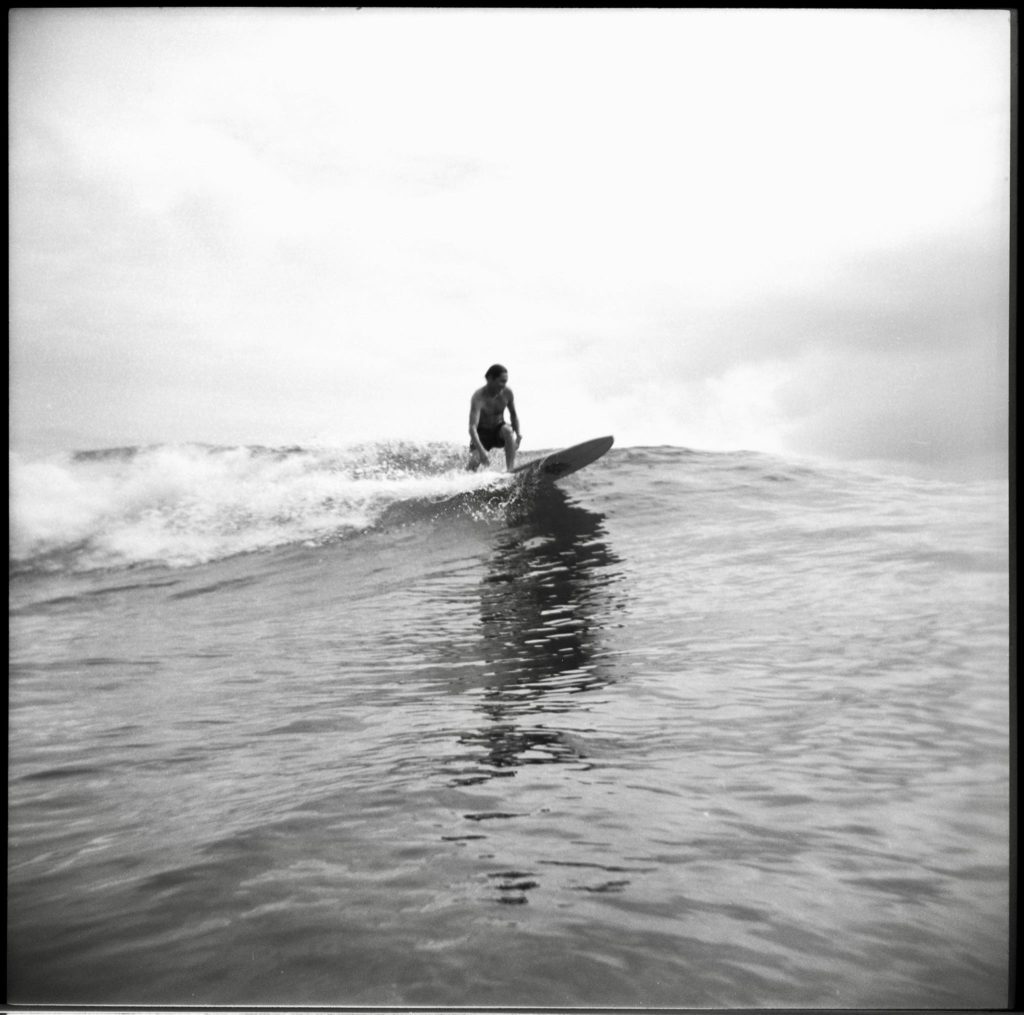 “I like having only 36 photos to go through,” says Mike Caputo when asked why he prefers analogue to digital for his photography work. He enjoys being in complete control of his creative process, from shooting all the way to developing. From the looks of it, he doesn’t seem like he’s giving up photography any time soon. A resident of Hawaii for over two decades, Mike successfully crowdfunded a darkroom in his local town some years ago, and it’s his go-to place for hanging out these days.

I wish we had an accessible, community-type darkroom here like the one Mike owns in Hawaii. Imagine being able to spend as much time as you want there, playing around and experimenting with developing film. I’d probably spend more time there each day than at a gym. Mike’s passion for film, and black and white analogue especially, is evident in how he speaks about that darkroom where he immerses himself for a good part of some days. It’s more than just a pet project now. He also takes time out to teach people how to develop their film rolls here. It’s important to spread the passion you have when doing what you love. What’s the point in hoarding knowledge when it’s best improved when it is shared? When I interview photographers like Mike, I sit back in awe when I read about how photography is a part of life that they cannot disconnect from. It’s always lovely to explore the work of photographers who shoot for themselves and their happiness first.

I also recently acquired a Leica M3 with a 50mm Summilux F/1.4 for $400. Who could say no to that deal? I’m about to run my first roll through it. I guess I’m in the Leica club now. I’ll find out soon if they’re all they’re cracked up to be.

Mike Caputo: I’m a firefighter in Hawaii, and I also own a small community darkroom in downtown Hilo on the Big Island. I came to Hawaii from Chicago about 20 years ago, and I live in a tropical jungle now instead of a concrete one. Both have their charms, I suppose. Occasionally I miss city life, blues bars, jazz festivals, fancy restaurants, Italian beef sandwiches, and of course, a proper hot dog. I’ve seen grown men put ketchup on a hot dog out here. It’s disgusting. Nobody puts ketchup on a hot dog!

I’ve always been interested in photography in a casual way, mostly snaps with family and friends for photo albums. My interest in photography as an art started a few years ago. It was gradual at first. When I learned how to develop my own film and make darkroom prints is when it really took off. I love the whole process from beginning to end. There’s something very satisfying about doing it all on your own. I still feel excited developing a roll of film and peeling it off the steel reel, holding it up to the light to see how the negatives look and wondering which ones I will decide to print is as fun as it ever was.

The Phoblographer: Underwater film cameras have been around for a few decades now, but what made you want to try this out in an era where digital photography is constantly evolving?

Mike Caputo: Digital is cool, and there are tons of things you can do with it that you can’t do with film. None of that interests me, though. I’ve tried shooting digital many times. For some reason, I don’t get the same feeling, the same satisfaction as I do with using film. Digital is stale to me. Too clean. Too many pictures. Too much editing… Maybe I’m just lazy. I’m not knocking digital; it’s just not my thing. The darkroom is my thing. That’s why I use a Nikonos. I like hand printing my photos sums it up pretty well.

The Phoblographer: Exposure aside, what are some of the other non technical challenges you face while shooting film underwater?

Mike Caputo: Exposure is not a challenge if you are using a newer model like the Nikonos IV or IV, both of which have a meter and aperture priority. I don’t. I have an old beat-up Nikonos II. There’s no meter, and it’s all mechanical. I like that. The wide exposure latitude of film helps, and if I’m really concerned, I’ll just push it a stop or two. I like the contrast and pop pushing adds to an image.

I guess a non-technical challenge would be surfing down a wave and trying to photograph other surfers while I’m cruising down the face. That one can be tricky.

The Phoblographer: “Blue Water Swim” – I can almost hear the Jaws theme each time I see this image. How challenging was this shoot to complete

Mike Caputo: Jaws is my favorite movie. I can recite Quint’s entire monologue after they drink to their legs. That being said, I hate sharks. I wish I could surf with my .45 1911A1 pistol strapped to my board to blast one if it came close. What possessed me to jump off a boat where 50 of them were swimming in a circle right below, I’ll never know. I guess because the woman running the tour said it was safe, and she dove in first. How am I not going in if a woman can jump overboard without fear?

The whole time I’m snapping pictures thinking, “Don’t bite me mother fuckers!”. It was a cool swim, but I don’t think I’d do it again. Once was enough.

The Phoblographer: You’ve done an Over/Under series. In such a series, what takes preference when deciding how many frames get shot over and how many under?

Mike Caputo: I figured a 50/50 split would suffice.

I printed 2 above and 2 below photos from that series.

I like experimenting with a variety of film, formats, and camera types. The learning process never stops. Screwing around with so much gear and a wide variety of film stock and chemistry helped me find the style and look I enjoy. I primarily shoot KODAK 400TX developed in stock KODAK D76. If I ever shoot color film, it’s always slide film. Nothing beats a big fat color positive image on the light table. It’s so cool!

The Phoblographer: Your darkroom looks like a place I could get lost in for many hours. Pet project of yours, or an absolute necessity these days for your professional work?

Mike Caputo: You could, and I do. It’s amazing how fast time goes by in the darkroom. Monday is the day I set up to print a couple of specific negatives, and I wind up walking out of the darkroom eight hours later with prints of things I had no intention of getting into.

Photography is a hobby and a passion for me; it is not my profession. I opened the Hawaii Darkroom because of how much I enjoy the film and hanging out with like-minded people. It’s not run like a business; it’s more of a personal studio, really. I give keys to the members to use whenever they want so I don’t have to keep any kind of hours. It’s worked out nice this way so far, except I make zero dollars from the darkroom.

If I have enough members to split the rent, though, I’ll be happy. I turn down calls all the time from people asking me to develop their film because I’d rather spend my time doing my own work. Not exactly a good business model. I’m happy to teach people how to DIY though. For that, I’ll make some time.

The Phoblographer: I notice that you also shoot a lot in the desert (much like me). What are some of your favourite film stocks to use here and why?

Mike Caputo: You must be referring to my recent Instagram posts. I took the family on a month-long RV trip to Texas, New Mexico, Arizona, Utah, and Colorado. It was awesome. I bought the Pentax 67 just for that trip and took a Nikon L35AF for quick snaps. I brought 30 rolls of 120 KODAK 400TX and about 30 rolls of Velvia and Ektachrome. I shot every single one! A location will never change my preference of film. I’m a die-hard Tri-X guy, and if I’m shooting color, it’s going to be Velvia or Ektachrome.

The Phoblographer: With film possibly going to get more expensive and scarce, do you think you might not shoot as much in the coming few years, or have you stocked up well already?

Mike Caputo: The only way I stop shooting film is if I lose interest in photography. I don’t see that happening. It’s a passion. There’s a few hobbies I have that I really enjoy and will never give up as long as I am able to continue with them; Photography, Chess, and Surfing. Those three are my jam. I have more chess books than photography ones. Total nerd.

I used to think of cameras as equipment to help me take better photos and I was always chasing new bodies and lenses. These days I look at them as tools in conjunction with particular film stocks and developing methods for the images I want to create. In the end, for me, it’s about the print.

The Phoblographer: Have your kids picked up your passion for film as well? Do they also love that shutter sound of the L35AF which I can’t ever get enough of?

Mike Caputo: Have you ever seen Married with Children?

My Bud and Kelly are teenagers now. Whoa Bundy.
I’m glad you dig that shutter sound; it sounds cool as hell.

The Phoblographer: And lastly, are there any new projects you’re working on or going to work on soon that might be of interest to our readers to know?

Mike Caputo: The last project I worked on was AMERICA: Fifty on Film. I got over 50 film photographers to represent each state and submit black and white photos for a pretty thick zine. I was considering doing volume II with color film. It’s a lot of work though, and I’m pretty busy these days working at the fire academy temporarily training recruits. A rewarding but demanding job. I’ll be doing it for over a year, so most of my projects will be personal work when I have time. I take a lot of pictures on the fire training ground and print them for the fellas to hang at the station. That’s fun.

All images by Mike Caputo. Used with permission. Visit his Instagram page, Youtube channel and Podcast site to learn more about his work.