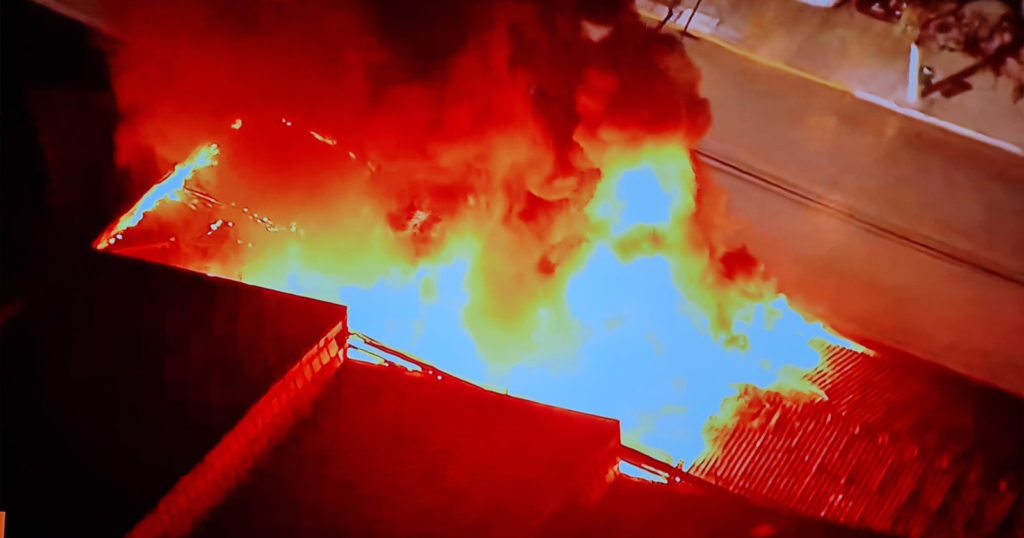 A storage facility belonging to the Cinemateca Brasileira has been engulfed by flames and while there were no injuries, the facility is home to priceless archives of 35mm and 16mm film and other museological objects.

The Cinemateca Brasileira is located in São Paulo and is the Brazilian institution responsible for preserving the country’s cinema archive. The building stored highly flammable films as well as historically significant objects like ancient projectors, documents, and archives.

The imminent tragedy that so many have been trying to prevent by speaking out on the dangerous precariousness of the Brazilian Cinematheque is now a reality — BRAZILIAN CINEMATHEQUE IS ON FIRE as reported by the local media #SOScinematecabrasileira #cinematecaisburning pic.twitter.com/IMhnH1IlaZ

A story by The Brazilian Report and other initial findings suggest that a short circuit in the air conditioning system may have been the cause of the fire. According to HyperAllergic, the 70,000-square-foot building is the latest cultural asset to fall victim to what are preventable disasters, with large blame being placed on the government’s deep budget cuts and negligence.

“The fire at the Cinemateca de São Paulo is a crime against the country’s culture,” João Doria, São Paulo governor, said to the press. “Contempt for the art and memory of Brazil leads to this: the gradual death of national culture.”

Brazilian President Bolsonaro dismantled the Ministry of Culture in 2019 and stopped paying for the Cinematec’as staff as well as ended its contract with a private foundation that oversaw the organization. These moves led to a lapse in care for the large film archive.

The International Federation of Film Archives (FIAF), which represents 172 members and associates around the globe, released a statement on the loss.

“While we do not yet know the full extent of the damage, it is likely that this latest catastrophe will have once again caused the loss of significant quantities of film and other key cultural artifacts preserved by the Cinemateca Brasileira, one of the oldest and most respected members of our global network and an essential custodian of Brazil’s rich film heritage,” the FIAF writes.

In the fall of last year, the entire staff of the Cinemateca was dismissed following several months of where none were paid. the FIAF expressed its deep concern over the situation at the time and called on the Brazilian government to help resolve the situation. That call appears to have fallen on deaf ears, as little progress was made. Now, many irreplaceable items are likely lost.

Statement issued by FIAF following the fire in one of the vaults of the Cinemateca Brasileira on 29 July 2021: pic.twitter.com/63dIHt16qk

“The future of the Cinemateca Brasileira remains more uncertain than ever, and each passing day puts its unique collections — already in a shameful state of neglect — increasingly at risk,” the FIAF continues.

This latest fire is the second to hit the Cinemateca Brasileira, as one in 2016 burned “some thousand” film roles. While this represented just 0.4% of the total archive, it is all irreplaceable should it be lost.

Firemen told @GloboNews that one of the Cinemateca Brasileira warehouse rooms that caught fire was storing films from the 1920s pic.twitter.com/LVBEwoCuOE

The Brazilian Report writes that this latest fire is one in a line of disasters that could have been prevented by an active and funded Ministry of Culture. In 2015, the Portuguese Language Museum in São Paulo was destroyed by a fire, and in 2018 almost 90% of Rio de Janeiro’s National Museum — which is also Brazil’s oldest — burned and nearly led to the building’s collapse.