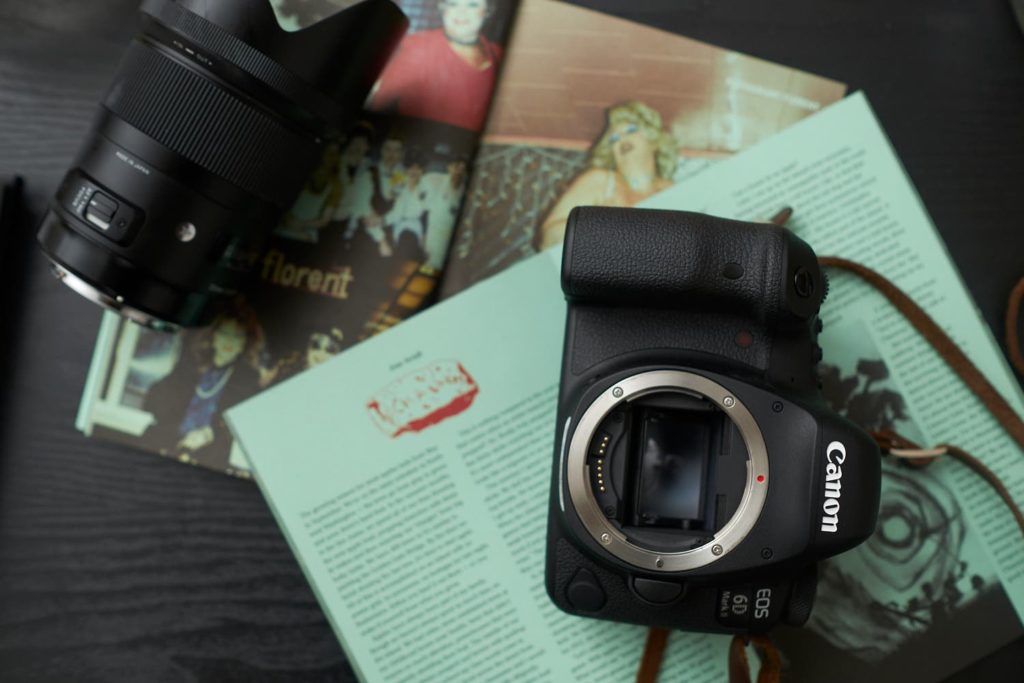 The rest of The Phoblographer team and I are going to take a trip down memory lane. We have decades of combined experience in the photography industry. However, all of us started somewhere. And of course, there was a time where we each had our first camera. But what did we use to begin the most influential journeys of our lives and careers? Let’s take a look.

As well as founding The Phoblographer, EIC Chris Gampat also has a background in photojournalism and wedding photography, and he focused his lens in a host of other genres. But where did it all start? And how does he feel about that early camera now?

“My first was a little Keystone point and shoot film camera. It was crap. It was really, truly utter garbage. But for most of my life, I grew up pretty poor. Add onto that that my mentally abusive mother was super technologically inept. We had an old Olympus film camera that she broke, and that she kept around in hopes that it would work one day again. And that leads me to my first digital camera, which was a struggle. How would I feel about it today? Well, there are crappy cameras, and then there are CRAPPY cameras. The Keystone was the latter. It’d make a nice doorstop.

“The first digital camera in our household was a small little HP Point and shoot camera. It had 8MP and a zoom lens. I was the reason for the purchase. I needed it for photojournalism class. My mom made such a fret over it and it became basically the household camera. So too did the Canon HV20 that I needed for class. It took a while for me to save up money for a Canon SX10. And then, when I got a job at PCMag, I went for the Olympus E510 two-lens kit. The HP camera served its purpose, but man, was it limiting. And my teacher was brutal. The SX10 let me do a lot more. And when I got the E510, I was shooting really solid photos.

“I kind of wish that HP had stayed in the photo world, actually. HP’s cameras weren’t bad. They were well built and made of metal. And they probably could’ve really helped to save printing. The Canon SX10 was a great camera that served its purpose. Even today, I still yearn for a good point and shoot. There are lots, but none are perfect for me personally. As for my first DSLR: well, I think I’m the Editor in Chief that’s biggest on the “DSLR Is Dead” slogan. I’ve been told my entire life that I’m too young for this or that. Even at 34, this is subtly pounded into my head, and I’ve started to get sassy about it.

“But the camera that I started this site with is the Canon 5D Mk II: the camera that revolutionized the entire industry. That camera stuck with me for a while. And ever since then, I’ve never had a sole, primary camera. There’s just anything that you put in my hands.”

Ellyn Kail delivers top class stories that cover the world’s most challenging and important stories. She cares deeply about wildlife and you will see that as a theme in the photography articles she writes. Of course, when she’s not helping to shape the world, she’s investing in her passion for photography. On where it all first started, she told me:

“My first camera was a Pentax K1000. I think I used Ilford 400 film and an old nifty fifty to start. I don’t use it anymore (partly because film isn’t vegan), but I loved it dearly and still do. I know it’s predictable; this is the camera everyone learns on, but that’s for a good reason. It’s super easy to use. I only had to worry about the very basics, but at the same time, this camera taught me how to shoot in manual. Using it became second nature in a way that I’ve never had with any camera since.

“Of course, I also loved the darkroom, and the K1000 allowed me to basically live in one during college (shoutout to Sarah Lawrence!). I’ve kept the camera as a reminder of that time ever since.”

Brittany Smith is The Phoblographer’s Reviews Writer. When she’s not testing kit, she out shooting for clients in Montana and NYC. She’s also a coffee lover, fitness instructor and has the cutest cat! On her first camera:

“My very, very first film camera was a Vivitar LF 110 film camera when I was quite young. It only worked for two rolls of film and went kaput. I’d say I really enjoyed it immediately, and it broke my heart. But I absolutely loved photography from a young age, although I hated it too because my mom would never stop taking pictures when we were growing up. We were very poor (my dad left when I was two) and my mom was too proud to collect anything even though she qualified. She did everything she could to make sure we didn’t feel it. My dad did provide child support and we had two weekends a month with him. I’d say that camera is popular now in the Lomography world, but I don’t have much to say except it wasn’t reliable.

“I didn’t get into photography again until my first year of college. I had no idea what I wanted to do after high school and had planned to take the year off to work and save as much as possible. I was living with my dad at the time. He enrolled me in college and said I had one elective to pick if I wanted to live with him. I insisted I’d rather get a job and move out, but he wound up convincing me it was a good idea. He had also gifted me a Canon Rebel camera for graduation, so I picked photography as my elective. I quickly fell in love and bought a Hasselblad 501cm in Sun Yellow a month later. That would be my main workhorse. That was also my first “digital camera” as I bought the CFV 16mp back.

“The Canon rebel was a perfectly fine camera for 35mm film. It was enough that I loved it and wanted more. To this day I love my 501cm. I like the pace, the quality, and the nostalgia. The original CFV 16mp back had a ridiculous crop factor and really wasn’t great. I sold the back for a Canon 5D Mark III and still own my 501cm to this day. I love the film side of Hasselblad. The digital side seems to bring the legacy to a halt. I do hope I’m wrong, but I’m not sure that I am. I would love to see them come up with a CFV back more akin to what they wanted to achieve with the X1D to work with it. One can hope.”

Feroz Khan is comfortable speaking about both the gear and artistic elements of photography. He brought you this extremely moving September 11 article and helps showcase the work of the best photographers in the industry. He’s also a highly-skilled pro photographer. Here’s what he said about his first camera:

“I grew up using film cameras owned by my granddad, but the first one I purchased and owned was the Nikon D300 (in 2008). It helped open a lot of doors in my pursuit to become a professional photographer. I took it with a 70-300, to the Dubai World Cup in 2008, when I was invited to attend as a guest and was spotted by one of the organizers. It was the first time a “That’s a nice camera” start to a conversation ended up in an invite to cover the event. Next year, I was back to photograph the event for them, which led to a recurring contract every year until 2019. That one evening changed my life as a photographer. I used the D300 professionally until 2012 when I switched to full-frame for better low light images.”

Hillary Grigonis helps inform our readers purchasing choices by using her expertise to review the latest gear from the leading manufacturers. Her roots are in photojournalism, and she’s also an experienced wedding and portrait photographer. Here’s where it all started:

“I had a few cheap cameras growing up, including an instant film camera that spit out stickers that I decorated my bedroom with. In high school, my aunt gave me a Sony point-and-shoot. I took it on a trip to the Grand Canyon, where it got sand stuck in the lens and stopped working. I ended up going to a gift shop and buying a disposable film camera. To this day, I still think of that doomed point-and-shoot when I buy weather-sealed gear.

“The first camera that I purchased with my own money was a Nikon D40X. I had gotten a job at the local newspaper. I can remember how excited I was when I first saved up enough money. My editor used Nikon, so that’s the brand that I looked at. I was making minimum wage so I pretty much went with Nikon’s cheapest DSLR. That was how I made the decision — the brand my editor recommended and price. I bought one of those too-good-to-be-true bundle kits online. I didn’t know much about cameras at all at the time and the bundle included a telephoto lens that wasn’t compatible with the D40X’s autofocus.

“Looking back, that may have been the reason I started digging so far into the technical side of photography. That camera lasted me several years (attempting to manually focus a telephoto for sports lasted only a few months). I gave it to my mom when I upgraded, and it lasted her a few more years. It doesn’t work anymore and the SD card slot door is broken off. But, I still keep it on a shelf in my office as a reminder of where I started.”

And then there’s me. My first camera was the Olympus SP-800UZ, which was released in 2010. I’d shown an interest in photography several years before that in college. Sadly, my parents didn’t have money to invest in my passion, and being a teenager, nor did I.

Then my mum met her new partner. The Olympus SP-800UZ was actually his camera, however he never used it. Realizing I had a passion for creating photographs, he said I could have it. I had no idea what I was doing, but the camera allowed me to truly learn the craft. The camera will always have a special place in my heart, and so does the man who let me have it. He and my mom are now separated, but we still keep in touch. It was important for me to let him know how influential he has been in terms of the life I live today.

Where Did It Start for You?

Photography is an amazing practice. And the journeys it can take us are often the bedrock of our lives. You all had your first camera, and we would love to know what it was. Let us know in the comments below. Thanks for reading.