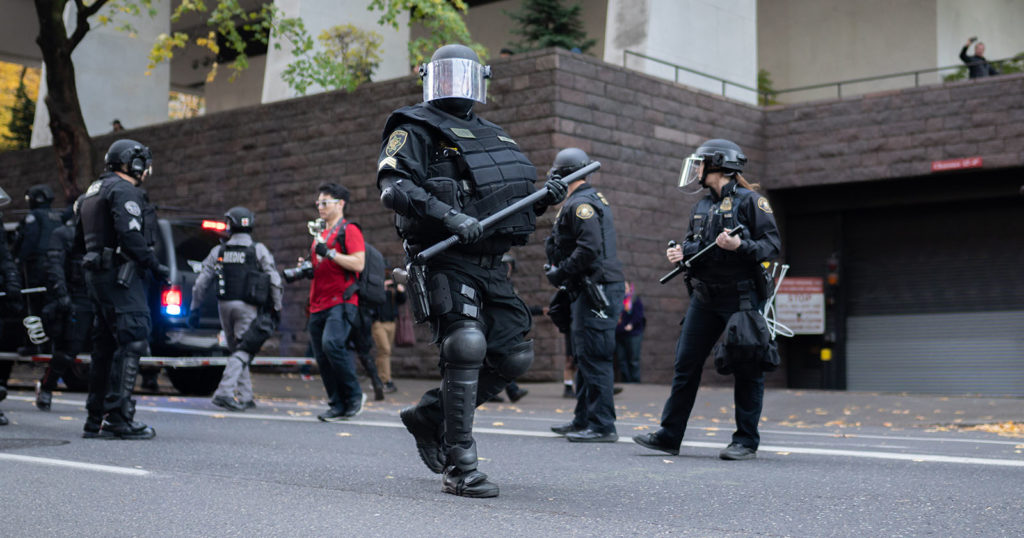 Every police officer in a crowd-control unit in Portland has resigned from the squad after one of its members was indicted on an assault charge for “excessive and unlawful” force against an activist photographer.

The Oregonian reports that all the roughly 50 officers, detectives, and sergeants in Portland’s specialized Rapid Response Team (RRT) voted to resign this past Wednesday in an unprecedented move for the Portland Police Bureau (PPB).

The meeting and vote came one day after RRT member Officer Corey Budworth was indicted and charged with fourth-degree assault for his actions last summer.

During the anti-racism protests and riots that slammed Portland in August 2020, a riot was declared on the night of August 18th after someone from a crowd of about 200 demonstrators launched a Molotov cocktail into the Multnomah Building, a government office in southeast Portland, setting it on fire.

During the RRT’s response to the riot, Budworth was captured on camera pushing activist photographer Teri Jacobs over from behind and then striking her in the head with his baton. Jacobs stated that she was left with injuries to her back and head as well as damage to her camera.

“I’m doing my very best to get to the sidewalk, and it feels like it doesn’t matter where I am, what I do, these police officers are going to run me over, ram into me,” Jacobs said of the incident, according to KATU2. “I really wasn’t aware of what was happening or the pain that I was in until I was on the sidewalk, and then I realized like, whoa, my back, my head, like what just happened there.”

The police union defended Budworth, stating that he used the lowest level of baton force and that the strike to the head was accidental.

“Reasonably believing that she was getting back up to re-engage in her unlawful activities, Officer Budworth employed one last baton push to try and keep her on the ground, which accidentally struck Ms. Jacobs in the head,” the union said in a statement. “The location of Officer Budworth’s last baton push was accidental, not criminal. He faced a violent and chaotic, rapidly evolving situation, and he used the lowest level of baton force — a push; not a strike or a jab — to remove Ms. Jacobs from the area.”

Jacobs announced earlier this year that she had agreed on a $50,000 civil settlement with the city of Portland over the incident.

In October 2020, the police association urged Portland’s mayor and police chief to publicly support the officers volunteering for the RRT.

“Our RRT members do not volunteer to have Molotov cocktails, fireworks, explosives, rocks, bottles, urine, feces and other dangerous objects thrown at them,” wrote then union president Daryl Turner. “Nor do they volunteer to have threats of rape, murder and assaults on their families hurled at them. They do not volunteer to suffer serious injuries, to be subjected to warrantless criticism and face allegations by elected officials, or to suffer through baseless complaints and lengthy investigations devoid of due process.”

“These officers find themselves in a no-win situation,” Turner continued. “They are told to stand down and only intervene when things have gotten so out of control that they have no other option than to use high levels of force to regain control of unlawful demonstrations. They are criticized for their perceived inaction on the front end and are criticized for their inevitable use of force on the back end. They can’t win because of the position others have put them in.”

After a grand jury made Budworth the first RTT member to face criminal prosecution this week, the entire RRT decided to resign, citing a lack of support from their city government and from the “extreme liability” now faced by those who volunteer for the squad (and serve without any special pay).

“On June 16, 2021, Portland Police Bureau employees serving as members of the Rapid Response Team (RRT) left their voluntary positions and no longer comprise a team,” the PPB announced in a press release. “Its members were sworn employees of the Portland Police who served on RRT in addition to their daily assignment in the Bureau. Despite no longer serving on RRT, they will continue in their regular assignments. There were approximately 50 employees serving as RRT members.”

Multnomah County District Attorney Mike Schmidt disagrees, saying that Budworth’s use of force was “excessive and lacks a justification under the law.”

Portland mayor Ted Wheeler has released a statement acknowledging the challenges faced by those who served on the RRT.

“I want to acknowledge the toll this past year has taken on them and their families—they have worked long hours under difficult conditions,” Wheeler writes. “I personally heard from some of them today, and I appreciate their willingness to share their concerns about managing the many public gatherings that often were violent and destructive.

“It is my expectation, and the community’s expectation, that the City remains committed to public safety and effective police oversight. City leaders will continue working in partnership with Portlanders, community organizations and police leadership to reform our community safety system.”

With Portland’s crowd-control squad gone, the city will reportedly turn to the Oregon State Police’s mobile response team as well as the Oregon National Guard if Portland police officers need support in the coming days.