Plexus by Elena Helfrecht Reminds Us of the Blair Witch 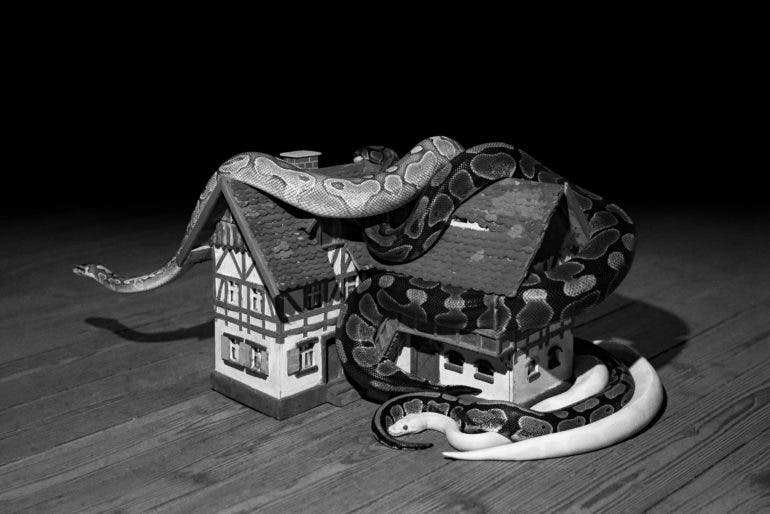 “I somehow see Plexus as a portrait project – a portrait of what has faded, and what is still lingering,” explains photographer Elena Helfrecht. “Maybe it can be seen as a sort of conjuring.” I originally poured over the images in Plexus on a mobile phone, and realized I wasn’t doing her work justice. When I looked at Plexus on my iMac, I had a completely different experience. I immediately thought of the Blair Witch Project, Paranormal Activity, and more of the found-footage horror movies that dominated my younger years. That’s where I became enamored with the series.

I think Plexus is not a series that belongs in print. To be honest, I think that would ruin the series. It belongs on your screen in dark mode, with you staring at the photos. When you peer into the work, you can almost feel its moving elements. Combine this with the fact that Plexus explores generational trauma, and you’ve got a recipe for a cinematic piece of photographic work.

Personally, I’m also a huge fan of the direct flash, no Photoshop or post-production, and the use of black and white.

I am mostly working digitally, as this allows me to experiment with the utmost flexibility, and without material (and financial) restrictions. My main tool is a Sony A7RII, which I chose first and foremost because of its capabilities to work in low light.

Phoblographer: It looks like you’ve used a lot of direct flash. How did this help you express yourself creatively?

Elena Helfrecht: The beauty of flash is its ability to highlight forms and structures and to blacken out the background. This often helps me to elevate the subject I had in mind. Since one overarching concept of the project is the visualization of psychological structures, and the exploration of how they are connected through different times and international contexts, the materials of the photographed subjects become a symbol for these aspects. Flash, together with the reduction of color, even them out and make them appear as one fabric.

Phoblographer: How much Photoshop was used in this project? Was most of it created in-camera?

Elena Helfrecht: While I always work on contrasts, lighting, and minor retouching, the whole project was created in-camera.

“The beauty of flash is its ability to highlight forms and structures and to blacken out the background. This often helps me to elevate the subject I had in mind.”

Phoblographer: A lot of your work is in black and white. What do you feel it does for your creativity?

Elena Helfrecht: A reduction of colors emphasizes form and structure, and it breaks down the image, so only the essentials are left. In turn, the image becomes more abstract and the eye is guided towards shapes and textures, which often helps to materialize the vision I had in mind. Recently, colors frequently seem more and more like a distraction to me. If I use color, it has to be for a very specific, often symbolic, reason.

Phoblographer: What photographers have influenced you? How have they done so?

Elena Helfrecht: It’s not only photography that influences my work, but my roots actually lie in art history. I think Symbolism and Romanticism have influenced me a lot. And then there is literature and movies, too. Some photographers I adore are Joel-Peter Witkin, Roger Ballen, George Shiras, Frederick Sommer, Annegret Soltau, and Francesca Woodman, for example. I believe we are constantly influenced by what we see and experience.

Phoblographer: Almost all of these images were shot in portrait orientation. How does that help viewers understand what you’re conveying in the images? Was that a purposeful creative decision?

Elena Helfrecht: I somehow see Plexus as a portrait project – a portrait of what has faded, and what is still lingering. Maybe it can be seen as a sort of conjuring. While the portrait orientation was not a conscious decision, I believe this must be one of the reasons why I felt attracted to it in the first place.

Phoblographer: When you were selecting images for this series, what questions were going through your mind? What unifying themes are there?

Elena Helfrecht: The selection of images, for me, is a more intuitive process than a rational one, and most connections manifest themselves only much later, the more I reflect on it. Though, the unifying concept is of course inherited trauma and the patterns of history, and the relation of personal experience to a shared reality and history.

Her project ‘Plexus’ is a photographic case study based on still lifes that emerge from inherited trauma and postmemory, exploring the family as an essential contributor to psychological and cultural processes across history. Following her grandmother’s death, she returns to her family estate and uses the house and its archive as stage and protagonists for an allegoric play. In the process of reconnecting the fragmentary history of her female lineage, the term ‘re-membering’ becomes literal. By immersing herself in this story, she fills the gaps with dreams, associations, and imagined scenes to create a narrative transgressing personal and national boundaries. The objects and architecture of the house become parabolic proxies and open a gate between the past and the present. Permeating the imagery is a figurative search for apparent reoccurrences in history, echoing her own repetition of her mother’s and grandmother’s behaviours. By confronting a past spanning across four generations, a renewed sense of identity provides ground for a detailed investigation of postmemory, mental health, war, and history.

Elena Helfrecht is a visual artist working with photography. She completed her MA in Photography at the Royal College of Art in London in 2019, after studying Art and Image History at Humboldt-Universität in Berlin until 2017 and receiving her BA in Art History and Book Science from Friedrich-Alexander-Universität in Erlangen in 2015. Elena’s work revolves around the inner space and the phenomena of consciousness, emerging from an autobiographical context and opening up to the surreal and fantastic, at times grotesque. Interweaving memories, experiences, and imagination, she creates inextricable narratives with multiple layers of meaning, characterised by a visceral iconography. She relates individual experiences to a collective history and turns personal involvement into a shared understanding. Elena lives and works in Bavaria.