The wide-angle lens is a popular choice for capturing expansive landscape vistas, travel photos, and architectural shots. But depending upon the scene, your vantage point, and whether or not you’re able to avoid tilting the camera up or down, unsightly perspective distortion may occur.

In the easy-to-follow tutorial below, British photographer Glyn Dewis demonstrates a quick fix for correcting lens distortion problems. As you’ll see, he wants to retain some distortion in the foreground for a creative effect, while eliminating the skewed perspective in the background. 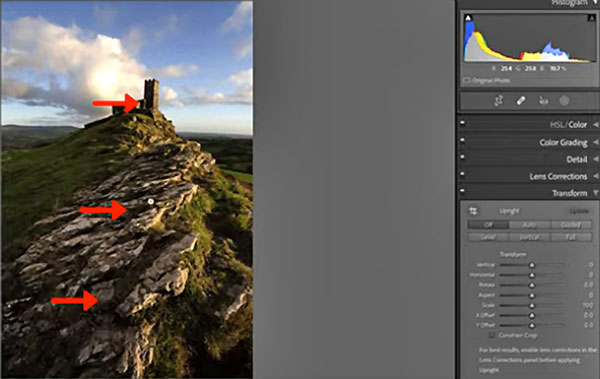 Dewis’ subject is the tiny hilltop Brentor Church that measures just 37×14 ft. with room for only 40 parishioners. Dating back to the 13th century, the beautiful church has a 360° view of England’s Dartmoor Village and it’s surroundings.

Because Dewis shot from below with a wide-angle lens, the walls of the church are noticeably distorted. His goal is to correct all the verticals, retain a straight horizon, and maintain wide-angle distortion in the foreground to emphasize the dramatic rocky hillside.

As Dewis explains, he began with a focus-stacked image to achieve maximum sharpness throughout the scene. He originally captured the shot in color, and later converted it to b&w. But the meat of the episode is correcting the perspective, and he walks you through a simple-step-by-step process for getting the job done. 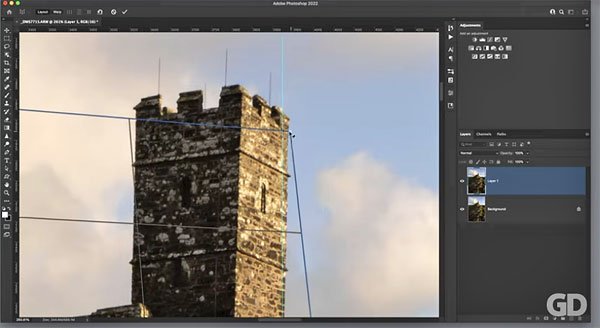 Because he shot from the side, rather than straight on, Dewis didn’t modify the leftward sloping roof of the church and concentrated on the verticals. His final result is very realistic, and exactly what he envisioned.

You can find more helpful advice on Dewis’ YouTube channel. And check out the tutorial we posted from another image-editing expert, explaining how to merge two images in Photoshop and match color, perspective and lighting.

New to Photoshop? These Are the 1st Tools to Learn (VIDEO)

3 Lens Filters You Should Bring to Every Shoot