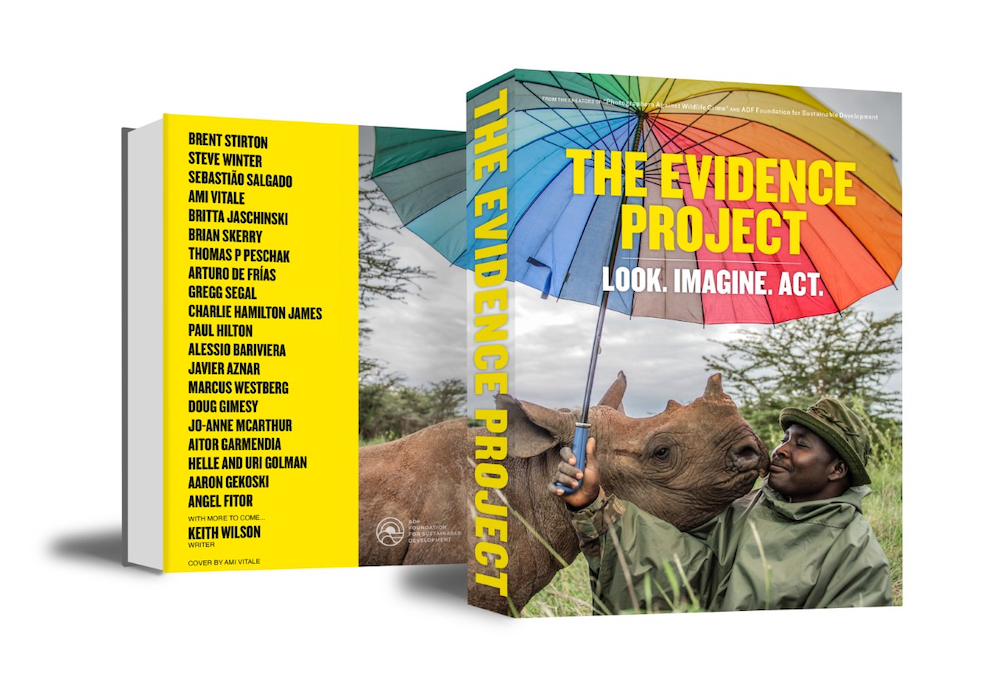 A selection of award-winning photojournalists have launched THE EVIDENCE PROJECT – a global campaign that uses the power of photography to explain the link between the destruction of the world’s ecosystems, the climate crisis and the outbreaks of deadly new diseases.

THE EVIDENCE PROJECT aims to provide the visual proof to provoke governments, business, opinion leaders and consumers into implementing the urgent changes required for a safe and sustainable future for all life on Earth.

Central to the campaign will be the creation of a new crowd-funded book – also called THE EVIDENCE PROJECT – which has been edited by Britta Jaschinski, Arturo de Frías and Keith Wilson.

This polar bear skin, possibly the victim of an organised trophy hunt, was confiscated by the Illegal Wildlife Trade Unit of UK Border Force. Each day, items of the wildlife trade are confiscated at many international borders, but there remains a need for governments across the globe to strengthen co-ordination to improve enforcement. At the same time, reducing demand for products and supporting sustainable livelihoods and economic development in the communities affected will make the wildlife trade less attractive to organised crime networks. Photograph: Britta Jaschinski/The Evidence Project

The book has been written by Keith Wilson.

Separate editions of THE EVIDENCE PROJECT in English and Spanish are planned for publication later this year, with other languages to follow, including German, Italian and Portuguese – for distribution in Brazil.

Amazon On Fire. Wildfires and deforestation are the main threat to our land-based ecosystems and species. Road building, mining, cattle farming, soya and oil palm plantations have seen vast areas of the world’s ancient rainforests cleared or degraded. Approximately 17% of the Amazon has already been destroyed. The world’s largest rainforest supports about a third of Earth’s known species, but as the forest continues to be cleared at record rates, many are facing extinction. Photograph: Charlie Hamilton James/The Evidence Project

Britta Jaschinski explained, ‘With this unique new book, we are gathering a startling collection of images that will stir conflicting emotions: rapture and horror; joy and grief. Such a paradox is designed to provoke debate and incite the need for positive change.’

Keith Wilson added, ‘Photography is arguably the most effective means to understand what is at stake and what needs to be done. This new book will raise public awareness and inform key policy makers in government and business about the importance of protecting our wild spaces and oceans, and creating a better environment in which to live.’

The editors stress that a major purpose of THE EVIDENCE PROJECT will be to explain how small and inexpensive lifestyle changes can lead to big improvements for society and the environment.

A Daring Giraffe Rescue. These endangered Rothschild’s giraffes were marooned on Longicharo Island, a rocky lava pinnacle in the middle of Kenya’s Lake Baringo. The rising lake levels, caused by persistent above-average rainfall, trapped the giraffes on an ever-shrinking island. In a dramatic rescue, two were transported on a raft across the lake to Ruko Community Conservancy. Scientists believe the heavy rainfalls are a direct result of climate change. As Lake Baringo and Kenya’s other Rift Valley lakes continue to rise, thousands of villagers are forced to flee their homes. Photograph: Ami Vitale/The Evidence Project

Arturo de Frías said, ‘Too often we forget that all life on Earth is interconnected. We are part of the natural web of life that supports and sustains us. By working together, millions of lives, both human and non-human, can be saved.’

Britta Jaschinski and Keith Wilson are also the co-founders and editors of PHOTOGRAPHERS AGAINST WILDLIFE CRIME™, the publishing and campaign initiative launched in 2017 to use the power of photography to help bring an end to the illegal wildlife trade in our lifetimes.

Birds Could Vanish Forever. Songbirds are rarely mentioned when discussing the illegal wildlife trade. In Asia, poaching networks are taking thousands of wild birds from the forests and transporting them in appalling conditions to sell as pets. The demand for exotic songbirds has brought dozens of species to the edge of extinction – in Java, Bird Life International reports there are more songbirds in cages than in forests. A global strategy is needed to engage communities and educate trappers and traders about the illegality and unsustainability of this trade and its impact on ecosystems. Photograph: Paul Hilton/The Evidence Project

THE EVIDENCE PROJECT book is planned for publication in autumn 2022 (in English and Spanish language editions) with 160+ pages and 100 photographs.

The book is planned to be available at a later date in other languages, including German, Italian and Portuguese – for distribution in Brazil.

It will be printed by F&W Druck in Germany. F&W Druck is both FSC and PEFC-certified and is a certified carbon neutral printer.

Following that there will be a series of exhibitions and presentations from Autumn 2022 onwards and throughout 2023.

100% of all pledges and donations to THE EVIDENCE PROJECT will be used to cover the production and distribution costs of this book.

To find out more about the Kickstarter campaign for the book go to THE EVIDENCE PROJECT Kickstarter.

A Close-Up On Cruelty. There are barely 4,000 tigers roaming wild and free, but many times that number kept in private zoos for selfies. ‘Young tigers are taken from their mothers after birth and bottle fed by humans,’ says photographer Steve Winter. ‘They are used as props until they are 12-weeks-old when they become too dangerous to hold. Many develop bone and joint problems because they were removed too early from their mothers and not given proper nutrition. At the same time, mother tigers are returned to cages to provide supplies of more cubs. This is done repeatedly. It’s inhumane.’ Photograph: Steve Winter/The Evidence Project

Known for her unique style of photojournalism, Britta Jaschinski has won numerous international awards. She works with governments, authorities, environmental organisations, charities and NGOs. When not on assignment, she’ll be a speaker at one of Europe’s photo or nature festivals, talking about conservation through photography. Her investigative images and multimedia shows about the wildlife trade are hard-hitting, yet always inspiring. Jaschinski’s work is published by Geo, National Geographic, Stern, Spiegel, The Guardian, WWF Media, Süddeutsche Zeitung and numerous other magazines, newspapers and books. Her highly collectible photos are exhibited worldwide. She is the co-creator of Photographers Against Wildlife Crime, an international group of photographers who have joined forces to use their iconic images to help bring an end to the illegal wildlife trade in our lifetime.

To find out more go to Britta Photography.

A prolific editor and creator of photo books, Keith Wilson has collaborated with some of the world’s leading photographers of wildlife, conservation and environmental issues. A co-founder (with Britta Jaschinski) of Photographers Against Wildlife Crime, he is also the co-editor (with Jo-Anne McArthur) and author of HIDDEN: Animals in the Anthropocene, the 2020 Photography Book of the Year (Pictures of the Year International Awards). He is the editor of the best-selling Remembering Elephants and Remembering Rhinos books (for the Born Free Foundation), and the recently published FOX: Neighbour Villain Icon, to name but a few. He is a former editor of Amateur Photographer, the founding editor of both Outdoor Photography and Wild Planet magazines, a fellow of the Royal Geographical Society and a sought-after speaker at photography festivals and universities.

To find out more go to Keith Wilson Media.

Arturo de Frías is a wildlife photographer, with over 25 years of experience, who specialises in polar and underwater environments. His images have been published in numerous books, media and magazines around the world, including National Geographic. His work has been awarded in several prestigious international competitions (SONY World Photography, Bird Photographer of the Year, FotoFIO, Fine Art Photography Awards, International Photographer of the Year, MontPhoto, AEFONA). He has published six nature photography books, which have sold thousands of copies, both in Spain and abroad (many have been translated into English). He is the founder and president of the ADF Foundation for Sustainable Development, a non-profit organisation which works towards a more sustainable development model and manages several philanthropic projects in Latin America and Spain.

Can a book make China look?

How to make your own photo book

Steve Winter on his sensational career and Tigers Forever tour