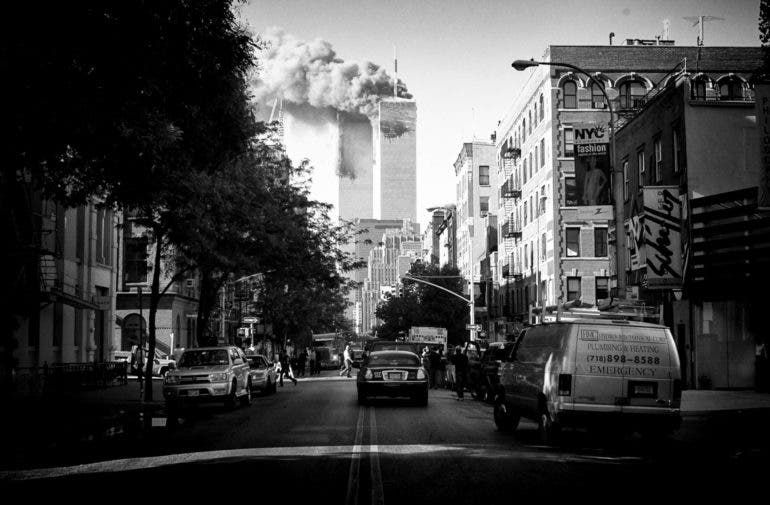 We’re on Apple Podcasts, Google Podcasts, Stitcher, Pocket Casts, and Spotify! You can also listen to it right here on The Phoblographer.

Twenty years have passed since two commercial planes struck the twin towers. You don’t need me to tell you what happened that day. Everyone has their own theories and opinions about it. And while that may divide people, one thing we all agree on is how traumatic that event was for the people of New York. Amongst the people fighting the struggles of that tragic day were photographers. Out on the front line, they felt compelled to document the harrowing events. Two decades later, how do they feel about the photos they made?

I had yet picked up a camera when the September 11 attacks took place. At the time, I was still too young to grasp exactly what was happening. “New York is on fire,” I said to my mom. Over the years, the true magnitude of the event began to settle in. But I lived on the other side of the Atlantic and would never fully grasp what it felt like that day.

The closest I ever got to fully empathizing with the disaster that unfolded was back in 2019. For the first time, I visited New York City, naturally incorporating a visit to ground zero. I wasn’t there for novelty; my aim was to try and feel.

I remember seeing the names of those who lost their lives carved into the feature inside the memorial museum. It hit home. 9/11 wasn’t a jaw-dropping event that only existed on television. It was real. Very real. It was one of the most emotionally challenging photographic experiences I’ve had.

But I can only speak as an outsider, a person peeking into a story I was never a part of. To truly understand what it was like that day, I turned to two photographers who documented the events around 9/11.

We first published the work of Jeff Rothstein in 2019. He had created over five decades’ worth of images that focused on New York City. He wasn’t a photographer going in to tell a story for a news outlet on the other side of the world. Rothstein was an insider: a true New Yorker.

Although he didn’t photograph events on the day, he captured the aftermath a few days later. The city was still in shock. The process of recovery still in its infancy. I asked Rothstein to put into words how he felt about the events on September 11.

“I felt disbelief and a profound, dark sadness and the realization that the world had changed forever. That being said, we New Yorkers are strong, and I knew we would eventually overcome this and grow even stronger.”

Rothstein kindly sent in a handful of the images that he made. For me, they capture the determination to keep strong while still trying to process what has happened. The image of the man holding a woman, his lips gently touching the side of her head, really hit me. It speaks togetherness: “we will hurt together, and we will heal together.”

Twenty years later, I asked Rothstein how he felt when looking at the photographs. He told me:

“The photos bring me right back to the moment. They were taken the weekend following the attacks. I especially remember the situation of the image of the two people consoling each other. The woman on the right side of the photo saw me taking the shot and started berating me for intruding on the couple’s grief. I was in the moment and was also feeling grief but knew I was recording history. For a photographer, it’s always a difficult situation when you’re documenting a tragedy.”

It raises a polarizing point. Photographers often struggle with documenting important events without upsetting the public. But imagery like above is important, and sometimes you have to put another person’s feelings to one side, while always being respectful.

Another photographer I spoke to was Phil Penman. He’s spoken to me before and he’s someone I consider a friend. I asked Penman what feeling and thought does he remember the most about that day.

“My most vivid memory is walking out of a music store. Many of us had run in there for shelter when the first tower was coming down. The windows of the store had turned completely black, and you could not see outside. Upon the first signs of daylight, we opened the front door of the store to what was an apocalyptic sight. Paperwork was falling from the sky, and dust and debris were everywhere. It was a parallel universe to the world I had been in just 10 minutes prior.”

Penman’s photographs have been published and seen all over the world. Asked how he feels about it 20 years later, he says:

“My one regret was that I hadn’t stayed down there and photographed more.

“We all knew once we left the site that we would not be able to get back down there again. Recently I completed an assignment “Then and Now”. Comparing and shooting the same locations I photographed 20 years ago and how they look now. I found it very revealing. Very little progress or change from that time for some areas, and for others, new buildings had gone up. From a photographic standpoint, the images I shot that day on September 11 are by far the biggest pictures I’ve ever taken. I only hope that I never have to photograph something like this again.”

Even when done in horrific circumstances, photography continues to be one of the most beautiful things we have. It allows both the creator and consumer to reflect on and reconnect to past events. The images of 9/11 will live in our minds forever. They will help us piece together what happened and allow us to empathize with all those who suffered. The images can encourage us to be grateful for what we have and all that we can lose.

Photographs of tragedy are never pleasant to view. But they serve as a valuable education. We need them. That’s why we should always respect the photographers that risked upsetting people, that put their safety on the line, and pushed through the mental trauma so they can tell the world its most important stories.

A huge thank you to both Rothstein and Penman for speaking with me.

Lead photo by Phil Penman. All images used with permission.