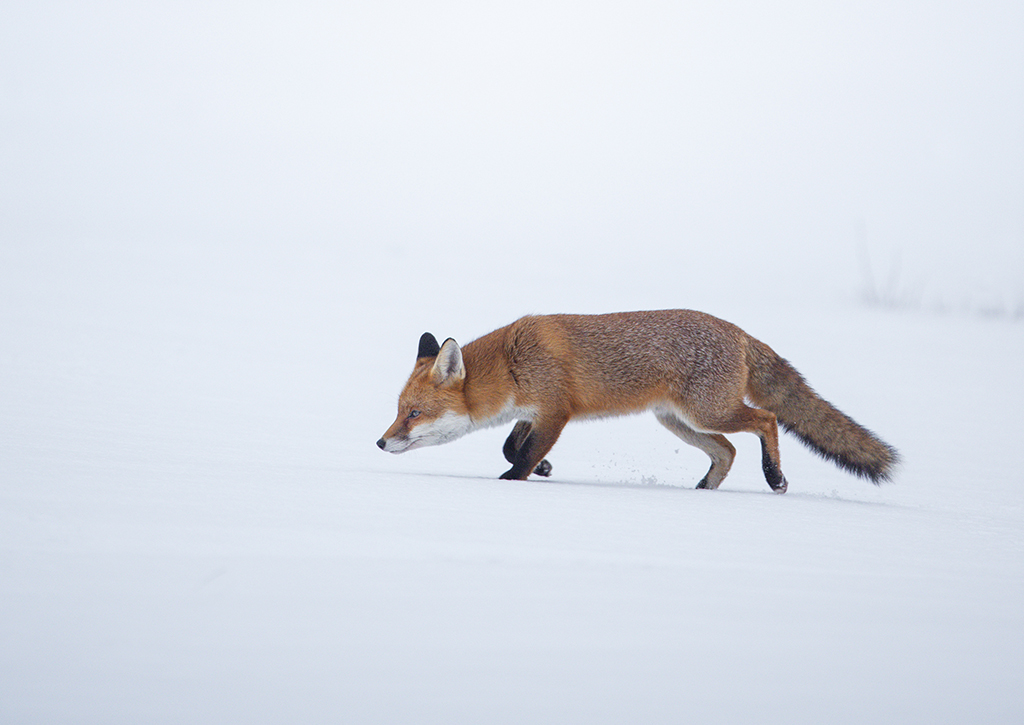 Former AP editor and passionate wildlife campaigner, Keith Wilson, is the picture and text editor of a new book called Fox: Neighbour, Villain, Icon. He tells us more about the book, which you can support on Kickstarter.

A growing cub cautiously explores the field margins close to its earth in Derbyshire, By Andy Parkinson

Well, why not – and there is no time like the present! The fox is the last predatory mammal or carnivore the UK has. Many centuries ago there were wolves, lynx, bears, even lions if you go back further.

So the fox is the last connection we have with the wilderness. Bu for everyone who likes foxes you will find somebody who despises them – they are an intrinsic part of UK culture. Red foxes can be found all over Europe and Asia, but somehow in this country there is a really perverse love/hate relationship with this animal.

What are you trying to achieve with the book?

We are not only documenting the fox’s lifecycle but also seeing how it’s coexisting in both an urban environment and a rural environment. We are even looking at some of the folklore surrounding the fox, which goes back many centuries.

A vet tends to an injured red fox that has been hit by a car and brought to the Fox Project, a dedicated hospital and rehabilitation centre for foxes in Kent. By Neil Aldridge

We have scientists contributing to the book, farmers, hunt saboteurs as well as those working in fox rehabilitation and rescue. And this is all depicted with some stunning wildlife photography.

A fox hunt led by the huntmaster and his hounds makes its way through a farm in West Sussex. By Matt Aldridge

While a lot of people supported the fox hunting ban, many now regard foxes as a pest, an annoying predator of their hens, or even as a health risk. Did you find this when working on the book?

Totally – there are a lot of ambivalent attitudes here in the UK. Many people think there is now a problem with fox numbers since the 2004 hunting ban came into force. In fact, fox numbers are up, but only in the cities.

In rural areas, they have declined, even with the hunting ban. This is down to loss of habitat, and the encroachment of humans. People say ‘oh this wild species is invading our garden.’ No, you have expanded into their habitat!

Two young cubs play affectionately together in a quiet forest in Derbyshire. By Andy Parkinson.

Also the fox is an opportunistic omnivore, so it will always go for an easy supply of food. It has a varied diet, which is one of the reasons it survives so well.

As for the hunting ban, hunting IS still going on, it is just that the authorities are turning a blind eye to it.

A red fox  looks out from the safety of her rehabilitation enclosure at a secure location in Kent, England. Her face bares the infected scars of a dog attack, By Neil Aldridge

So is this a book about foxes with supporting photography, or a photography book first and foremost?

It’s a good mixture of photography and supporting text and yes, it is photography-led. So you’ve got the three photographers Andy Parkinson, Neil Aldridge and Matt Maran, who all approach the fox from different angles.

Neil is more of a photojournalist while Andy is focused on capturing wild foxes in their natural habitat, as undisturbed as possible.

An adult vixen on snow covered ground in Derbyshire. By Andy Parkinson

Matt, meanwhile, has been documenting foxes in London for years. So there is a great variety of fox imagery, including the fox’s interaction of people.

A fox in the city, by Matt Maran

How is the Kickstarter campaign going?

It’s going ok but we are not there yet. The campaign ends on 30th October and we still need the support of AP readers to hit our £40k target. Paper prices and other book production costs have got a lot higher owing to economic factors. Chris Packham wrote the forward, and has backed us from the beginning.

He did a tweet recently, and it gave us a big boost, which we needed.

After this, do you plan to do a book on other kinds of British wildlife?

Who knows. This latest book has been two years in the making, and was planned before the pandemic. As the picture and text editor, I am very pleased with how it’s all looking. The book features some award-winning pictures, but also a lot of images which haven’t been published or posted online.

Fox: Neighbour, Villain, Icon is beautifully illustrated hardcover book with over 100 fox photographs by the three award-winning photographers You can support this very worthwhile project, and find out more about the book, here.