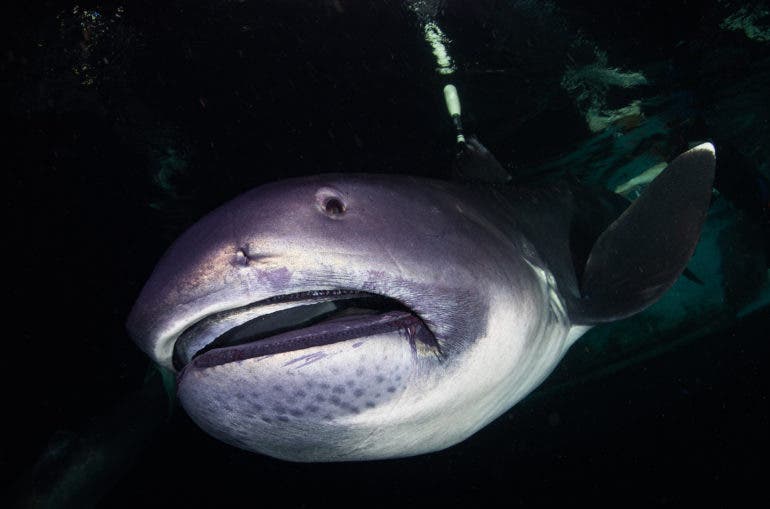 All images by Zola Chen. Used with permission.

“We bring videos and images captured underwater up onto the land to show people who cannot swim”, says Zola Chen, a marine ecology photographer based in Taiwan. First observed in 1976 off Kahuku Point in O’ahu, Hawaii, the Megamouth shark is one of the rarest documented species of sharks. The then Waikiki Aquarium director Leighton Taylor named it Megachasma pelagios, Greek for “giant yawner of the open sea”. Its mouth can extend roughly to 30% of its body length, and it is one of only three filter-feeding types of shark. To date, it has been officially sighted less than 100 times.

When you hear the word shark, the first image that comes to mind is probably of Bruce – the (mechanical) Great White shark that starred in the 1975 Steven Spielberg blockbuster Jaws. That one movie alone vilified the entire biological order of fish called Euselachii that sharks fall under. They’ve been portrayed as savage, ruthless predators out to hunt down humans in the sea. However, the reality is that sharks have more to fear from humans than the other way around. According to a 2016 estimate, an average of 100 million sharks per year are directly or indirectly killed by humans.

Shark fin demand is the leading cause of this, followed by commercial fishing trawlers accidentally trapping sharks. Zola spotted the Megamouth when she was on an expedition in Taiwan with the Deep Blue Research Foundation. This expedition was the first ever to successfully data tag a Megamouth shark, and they hope to be back in Taiwan in June of 2022 to continue their research.

The Phoblographer: Tell us how you got into photography (specifically underwater photography).

Zola Chen: I am a photographer specializing in marine ecosystems. I previously worked as a multimedia designer. I learned diving and free-diving in 2010. Since then, I have been going underwater with my camera to capture wonderful ecosystems beneath the sea surface and also the diversified culture and customs on land. I have been continuously recording images of marine ecosystems whereever I go.

In 2015, I took part in a two-month camp in Huailien and got to know the organizer, Kuroshio Ocean Education Foundation. I really appreciate their efforts to promote marine and environmental protection. Up till now, I am still their volunteer to work as an underwater photographer. In the hope of getting a better understanding of the whales and dolphins in Taiwan, I dived in an array of sea areas, including Hualien and Taitung in Taiwan, Kingdom of Tonga, Sri Lanka, New Zealand etc. I participated in Paul Clerkin’s underwater shooting of a megamouth shark documentary in 2018 and joined Kuroshio Rafting Plan and Kuroshio’s Beyond the Blue.

The Phoblographer: How complicated is the exposure and metering process underwater? Is it as straightforward as on land, or do you have to make additional compensations and adjustments to get a properly exposed image?

Zola Chen: Different metering modes are used to determine the exposure underwater, depending on the water depth and your theme of shooting. There are coral reefs, shipwrecks, people and large to micro-organisms beneath the sea surface. The light becomes dimmer as depth increases so the light intensity is extreme between bright light blue near the surface and dark blue in deeper sea, especially when you want to take a vertical image.

When shooting wide angle underwater, it is usually better to use center-weighted metering compared to matrix metering because it can inform the camera of the right area to expose while compensating for the surrounding light intensity. This helps averaging the exposure, for example, when there is overexposure under the sun or under-exposure in some darker areas like the bottom of coral reefs where is dark blue in colour.

Matrix metering is not the best choice when shooting wide angle underwater. For example, when shooting under back-lighted setting, the area near the surface is very bright and will lead to insufficient exposure of the image because the camera will try to avoid the bright areas being overexposed. When shooting illuminated objects, the objects are always overexposed because the dimmer areas at the bottom of the image will cause the camera to overcorrect the exposure.

For macrophotography, the mode of metering is not important because the light source comes from your flash and you can get a reading based on the surrounding light intensity using your camera’s metering.

Spot metering is very useful when the contrast of the object is large. Exposing the right area is extremely important. If you want to take an under-exposed image of the silhouette but not turning the sun into a white ball, choosing the right spot for exposure is the key to success.

The Phoblographer: Can you tell us a bit about your underwater photography gear?

Zola Chen: I am currently using Canon 5D Mark IV as the main shooting gear, accompanied with GoPro to record the shooting process. I most often use wide-angle lenses when shooting underwater. I choose between the mostly used 16-35 mm wide-angle lens which does not distort the image and the 8-15 mm fish-eye lens with exaggeration effects.

Shooting underwater is totally different from shooting on land, especially in the equipment you use. You have to prepare waterproof cases which suit different models of cameras and different lens hoods for your lenses respectively. When choosing between EVIL and SLR Camera, I mainly consider the theme of my shooting. Furthermore, you will need underwater flash, AF-assist lamp, arms and clamps etc.

To prevent water inflow into the camera shell, you have to clean every water rubber or silicon ring, which keeps out the water, every time you put on the case. Any dust or hair on it can lead to waterflow into the case. A waterproof shell consists of a front and a back cover, you can see its precise design and buttons on the interior face. There are also different waterproof cases for the highly diversified types of lenses.

The Phoblographer: Do you tend to use many add-on lights, and has your setup changed much since you first began?

Zola Chen: Besides camera, light source is the second most important equipment in underwater photography. The illumination under water is very unusual as sunlight loses its red light after passing through 5 m of sea water. Everything appears bluish or greenish. To restore the colours, apart from using a filter, a video light brighter than the sunlight is necessary.

Your theme of shooting determines which light source you use. The biggest difference lies between photo-taking or video-shooting. Using megamouth sharks as an example, the shooting of documentary mainly happened during the nighttime, fishing boats had their own lamps for working so the use of light source was even more complicated. In addition to bringing our video lights underwater, adding arm system to the main camera and the auxiliary lighting on the ship were essential as well. I requested the captain of the ship to give me a constant warm-coloured light source. Usually when shooting huge whales or mammals, we free-dive and shoot under natural light but I bring my video light or flash to compensate for the deviation of light intensity during usual diving.

The Phoblographer: Are there any favorite times of the day/year to photograph marine creatures?

Zola Chen: In Taiwan, I look forward to coral spawning in May. Actually, there are different organisms to capture in each month. In May and June, there will be megamouth sharks and whale sharks. In winter, I wish to record the underwater scene of swordfish tagging. My personal favourite is my annual visit to Vava’u, Kingdom of Tonga to capture humpback whales in September.

The Phoblographer: What influences your choices for these decisions?

Zola Chen: What influences me is usually whether I have company to go with and take care of each other and the invitation to different underwater photography projects. I mostly choose those that focus on big animals and the interactions between humans and the marine environment.

The Phoblographer: Since it was first spotted in 1976, you’ve been one of the few people in history to have photographed the elusive Megamouth shark.
Can you tell us what this experience was like and how did this opportunity come about?

Zola Chen: Paul Clerkin, an American shark researcher and the director Scott DeGraw came to Taiwan to record videos of tagging megamouth sharks. I was introduced to them by a marine researcher. I thought it was a valuable opportunity and therefore joined the underwater shooting project. It was a precious experience to be able to meet such a rare and huge marine animal, especially in my own country.

The Phoblographer: As someone who has photographed a lot of underwater life, what species would you say is the most challenging to film and why?

Zola Chen: The Sardine Run of southern Africa, which is a theme that I tried but failed. It is a phenomenon of predation of multiple species. The prerequisite is that the common dolphins drive the sardines into shoals, which in turn attract Bryde’s whales, sharks, seals and seabirds to prey on them.

The Phoblographer: Do you find yourself constantly in awe when up close with these creatures?

Zola Chen: Absolutely! Since I have started underwater photography, I have dived with large marine animals like humpback whales, sperm whales, Bryde’s whales, great white sharks, megamouth sharks etc. When I was face-to-face with them underwater, I was awestruck. They are really beautiful creatures.

The Phoblographer: I’m told that there is a fantastic community of underwater photographers in Taiwan. Has collaborating with them helped spread awareness of marine conservation in the region?

The Phoblographer: How do you contain your excitement at times to ensure you capture the best images during such rare moments?

Zola Chen: Keep paying attention to what you like about the ocean and creatures

The Phoblographer: Is there any particular creature that has evaded you all these years which you are still searching to photograph?

Zola Chen: I have always wanted to try ice diving in the polar regions, diving in different environments and shooting narwhals. Although it is very difficult to achieve, I look forward to having the opportunity to achieve it.

The Phoblographer: If you were to pick just one underwater image from your portfolio as your favorite, which one would it be and why?

Zola Chen: Encounters with mothers and their calves are a very special and endearing part of being allowed in the water with the Tongan humpbacks. The bond between them is clear and strong, and the mothers are very protective and wary of potential predators.

Being so near to such a huge creature is an experience that will stay with your forever!

The Phoblographer: Any words of wisdom for photographers who might be looking to photograph below the surface of the oceans?

Zola Chen: Underwater photographer[s have] an extra-ordinary job, especially specializing in ecological photography. We bring videos and images captured underwater up onto the land to show people who cannot swim and who do not have an opportunity to dive to show them stories of the ocean.

How this shark continues to remain elusive is a mystery in itself. Here’s hoping that we come to learn more about them in the coming years.

All images by Zola Chen. Used with permission. Visit her website and her Instagram for more. Also do check out the Deep Blue Research Foundation Instagram page to know more about how Paul Clerkin, Charles Miller, and Scott Degraw are researching the Megamouth shark.