Photographer Stephen Mallon Documents How Artificial Reefs are Made 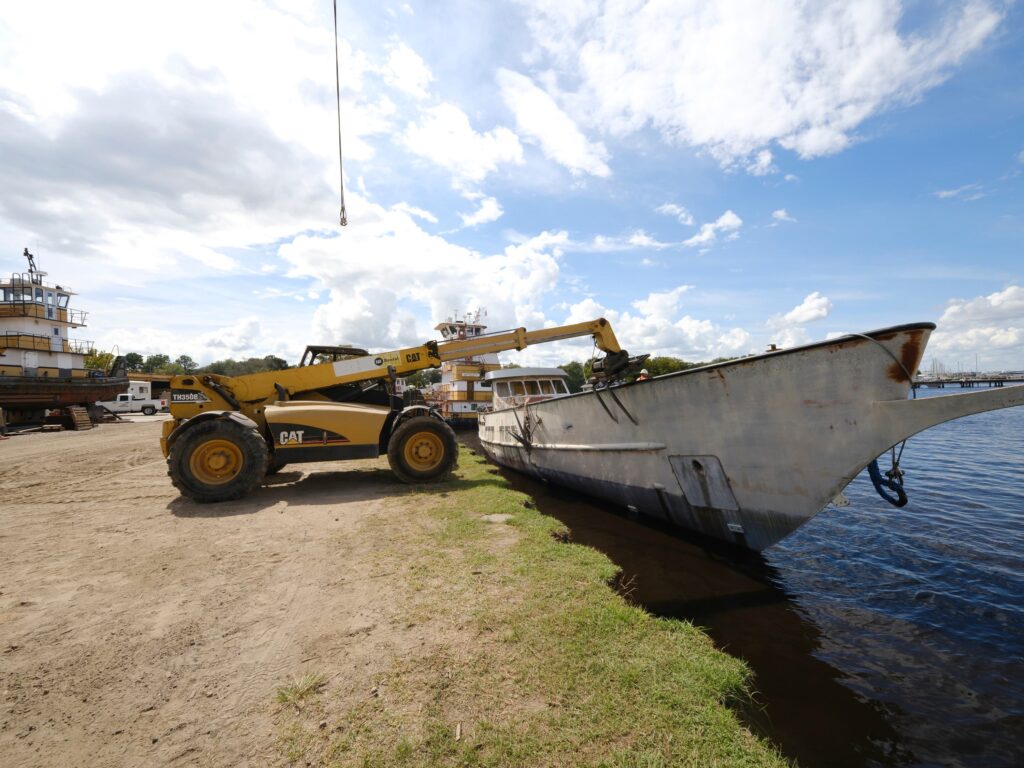 “I’m looking at the story,” explains photographer Stephen Mallon to us in an interview. “I hear my editor’s voice in my head, asking for the wide, the detail, the portrait. I try not to focus only on the shots that I think I know I want and cover everything.” Mr. Mallon has quite the background as a photographer and a large list of clients. A project he’s been working on for a while involves creating artificial reefs in an attempt to combat global warming. It’s pretty exciting to think about once you put yourself in his shoes.

I was shooting with the Canon 5Ds and the Fuji GFX 100s on Sigma lens with a Metabones adaptor. I had the Sigma 70-200 2.8 on the Canon for the faster images with the 16-35 MkII on the Fuji for the wide shots. I’ve gotten hooked on the color science in the Fuji but the AF (at least with the Metabones adapter) isn’t chasing the subject as well as the Canon is. This might also be that fact that with the adapter and me only having the Fuji for a few months I don’t know all of its tricks in staying in focus!

Talk to us about how you first got into photography. What made you fall in love with it?

It started when I was less than three. My dad handed me his Canon AE-1 to take a photo of him and my mom together. I never lost the love of the still image. Immortality drives me now.

We’ve interviewed tons of photographers over the years. Your background is this fascinating combination of editorial and documentary. What sort of influences were there and what paths have you taken to build your specific creative vision?

Thank you! I was determined to find a way to shoot what I wanted and survive on the work at the same time. I have always loved seeing big prints on the wall and part of the drive was figuring out what I could hang and deliver to a client as one. I worked with photo editors at agencies and magazines that helped me refine the work, become more focused, and find stories and projects that I would obsess about. Influences- Selagado, Burtynsky, Chris Jordan, Picasso, and Christo.

You’re photographing all of these scenes where vehicles and things are dumped into the ocean to be made into sustainable, man-made reefs. In the years to come when you retire, what would you like to have accomplished? Is it about education on environmental efforts? The praise for the companies?

I’m thankful that the work has been so widely viewed. The research that I’ve seen is that these reefs can be extremely successful with the right materials. Apparently, they tried tires at one point but the current ripped them off of the wire ropes they were tethered to and ended up washing up on the beaches. My project American Relamatoin began in 2007 after I was approached about making a book. I didn’t feel like I had a solid collection of images to create Stephen Mallon’s coffee table book so my wife and I started looking at the images I had already been drawn towards. We realized i was already finding textural maps at recycling plants and that I had shot while traveling. I found out about the artificial reef project that the MTA was doing in 2007. I was under the impression that I had missed it and when I found out it was ongoing I felt it was a great addition to American Reclamation. Florida is now the third reef project I’ve shot and I want more!

I can imagine that projects like this take a lot of pre-plannng. You’re on a moving boat, the tide might be rough, the boats sometimes go under, and you’ve got a limited amount of time to get THE SHOT. What’s the most difficult part of all this? What’s typically going through your mind creatively? Do you ever wanting to change creative visions at the last minute?

Pre-planning with a touch of being ready in case someone calls and tells you the shoot you thought was happening at the end of the month is happening on Tuesday… (that happened last month). Shooting on boats requires a good sense of balance, a touch of faith, and a little bit of cropping and leveling in the end. When I’m shooting, I’m watching the scene unfold, moving myself and the boat to keep the action in the frame and maximizing the light, and isolating the subject as much as possible.

When you’ve shot everything, you come back, and you’re editing the final selection down, what’s usually going through your head? Are there questions you’re constantly asking yourself?

I’m looking at the story. I hear my editor’s voice in my head, asking for the wide, the detail, the portrait. I try not to focus only on the shots that I think I know I want and cover everything. As Vincent Laforet said, avoid the monkey moment cheering myself so I don’t miss a shot. My goal is for the images to be good enough for me to want to put them up on the wall. I still need images for the transitions, details to tell the story, and the portrait both for the human connection and the scale of the project which is sometimes hard to imagine. Isolating the subject and keeping people out of frame keeps a level of mystery that I enjoy.

What are some of the biggest dangers in doing this kind of work? Have there ever been any scary moments you’d like to tell us about?

I have been really fortunate in staying out of harm’s way. One fall off of a ladder was a little painful on a shoot a day before flying out for the New York Times Magazine was annoying. There was one moment that I stepped back and then looked, finding out that there was a gap, not a walkway… Three points of contact is a really good rule. Two hands on a railing, one foot on a step; don’t run.

Have you ever gone scuba diving to explore these new reefs? What are they like? You talked about how the last one was placed down there in 2009 and it’s been over a decade now.

It’s on the bucket list! I’ve seen images from the parks and reefs dept  🙂 along with hearing from them about how successful they have been. Apparently, the generation of cars that I photographed, the grommets did break down and the cars collapsed. This causes a lot of smaller spaces for the little fish rather than the adventure for the scuba. The

What’s your next big dream project and how are you working on getting that gig?

I’m obsessed with my Passing Freight project at the moment. I’d like to take this state to state and create a Passing Arizona, Passing California, and then head to other countries to capture the unique infrastructure with their unique land and cityscapes. Couple more dreams- the coal train- following the coal being sent to foundries overseas. All Seas and their ship to recycle decommissioned oil rigs. The shipbreaking industry. Airplane graveyards, and a few others I can’t talk about right now!

I’m working on some new partnerships to help grant access and sponsorship for these projects, details soon!

Huge thank you to Visit Jacksonville and Joe Kistel of Kistel Media for helping produce the shoot!

“There was one moment that I stepped back and then looked, finding out that there was a gap, not a walkway… Three points of contact is a really good rule. Two hands on a railing, one foot on a step; don’t run.”