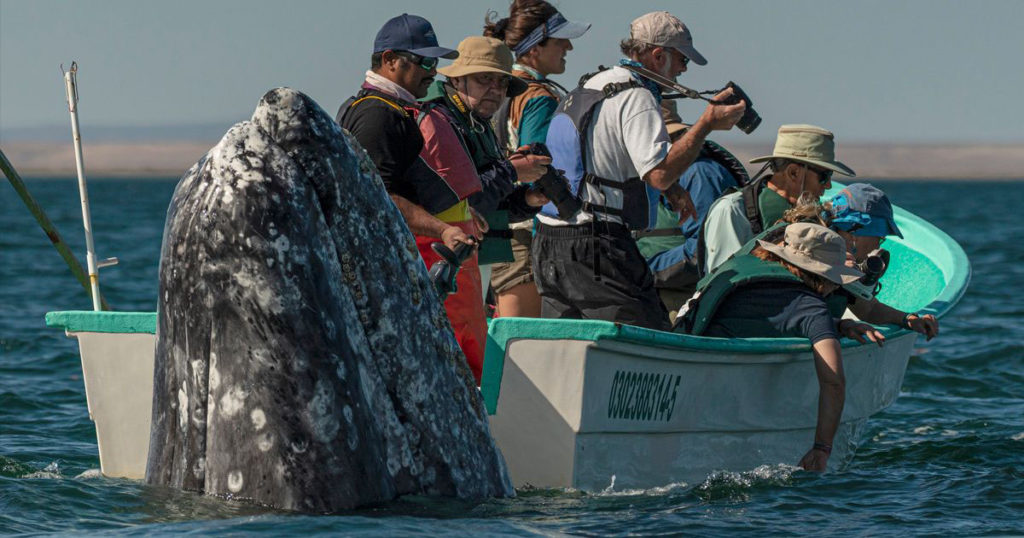 Photographer Eric Smith was photographing a whale migration last year when he captured this humorous photo showing a sneaky whale popping up right next to a group of unsuspecting whale watchers.

Smith, a Los Angeles-based documentary photographer, was in Baja’s San Ignacio Lagoon in March 2020 just before COVID-19 lockdowns to document the migratory gray whales there. The area is also popular with tourists, who board small motorboats called “pangas” to see and photograph the whales from up close.

For this photo, Smith had watched a mother gray whale and her baby approach a panga loaded with tourists. When the calf appeared near the bow of the vessel, the tourists began looking forward, causing them to miss the crazy sight of the mother whale popping up from out of the water just a foot behind the stern.

This behavior is known as spyhopping — the whale rises and stays partially out of the ocean to look at something above water. Depending on how curious it is, whales may spyhop for minutes at a time.

“Spyhopping often occurs during a ‘mugging’ situation, where the focus of a whale’s attention is on a boat, such as whale-watching tours, which they sometimes approach and interact with,” Wikipedia states.

Luckily for the tourists and photographers on the panga, they noticed the mother whale just a moment after Smith captured the photograph.

“And the winner of hide and seek is… My fellow whale enthusiasts from Campo Cortez in Baja wait for an appearance at the front of their boat while this awesome spy hopper snuck up behind everyone at super close range,” Smith wrote when sharing this photo on Instagram. “This shot is the second before everyone caught on and cheers erupted.”

“I was in another panga a few dozen feet away and caught the moment right before everyone realized she was so close,” Smith tells Digital Photo Pro. “When everyone turned around, she quickly sank below the surface. Cheering and hysterical laughter ensued.”

Image credits: Photograph by Eric Smith and used with permission