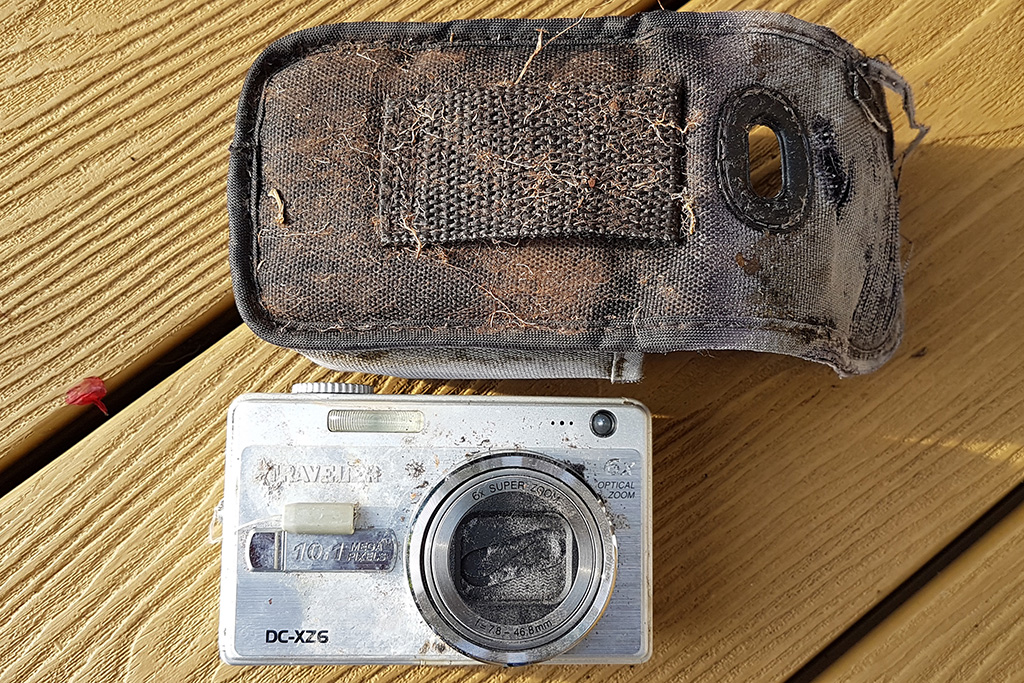 Ken Critchley has been reunited with a camera he lost 12 years ago, after Mike Price found it on a walk in the North West of Scotland. Both Ken and Mike are photographers and hikers, and on a separate walk, 12 years later, Mike ended up on exactly the same spot where Ken lost his camera.

The camera no longer worked, but the memory card worked perflectly, and thanks to Ken taking a photograph of his name, address and contact details, Mike was able to reunite Ken with his camera and photos!

“I was delighted to see some of the pictures from a memorable trip”, says Ken. “Losing the camera on the very last hill day brought on a depressed mood almost like a bereavement”.

Mike has shared photographs from the camera, as well as more details on how the camera was lost, plus how and where it was found below.

A digital camera has been found twelve years after it was lost in a remote part of North West Scotland. The small digital camera fell off Ken Critchley’s belt while he was beginning the last day of a two-week hiking trip back in July 2009. “I stopped to adjust my trouser belt” recalls Ken. “I’d missed a belt loop and it didn’t feel right”. A few minutes later he stopped again to take a picture and realised his camera was missing. He searched the area for half an hour, returning the following day to search for another hour but found nothing. “I ended up totally deflated”, says Ken. “I drove home to Wigan, mourning the loss of pictures from a wonderful trip that included the Isle of Skye, the Torridon hills and the surrounding area.”

Ken’s route in orange, Mike’s route in blue, and where the camera was found

Twelve years to the month after Ken’s loss, Mike Price was exploring North West Scotland alone in July 2021. “I was hiking and camping in the area very spontaneously” he says. “I’d been in very low cloud much of the time. It had been pretty grim so I decided to stay off the summits that day.” Unable to cross the Gruinard river that drains Loch na Sealga, Mike had climbed the opposite way to reach the Inverianvie river and its impressive waterfalls. “There were no footpaths but I picked up a deer track” recalls Mike. “The mist lifted briefly and revealed a small lochan so I stopped to take a photograph and check my map”. He noticed something at his feet. “It was so bizarre”, he says, “I felt I was in the middle of nowhere, wondering if anyone had ever been there, and then I noticed this small black case stuck in the peat.” Mike picked it up and was surprised to find a digital camera inside.

The recovered camera after being left for 12 years

Once home, Mike was able to remove the camera’s memory card. “I was surprised that the camera wasn’t in worse condition” he says. “It wouldn’t respond to power but the memory card was as if new”. Inserting it into his computer he found photographs and their date. With great foresight, Ken had taken a photograph of his name, e-mail address and phone number. Ken, now 80, still had the same phone number so Mike was able to return the memory card.

The Quiraing on Skye by Ken Critchley

“I was delighted to see some of the pictures from a memorable trip”, says Ken. “Losing the camera on the very last hill day brought on a depressed mood almost like a bereavement”.

“The coincidence seems incredible”, says Mike. “We were on completely different routes which happened to cross at the exact point where Ken dropped his camera. I find it hard to believe. I only stopped there by chance, as did Ken.”

“I’m overjoyed” says Ken. “I now have 72 pictures from a fabulous two-week trip, which I thought I had lost forever.”

The area of North West Scotland in which the camera was found is about half way between the coastal towns of Gairloch and Ullapool, an area known as Wester Ross. More specifically, the location referred to is in the Fisherfield Forest, a largely remote and treeless area of hills, mountains, lochs, rivers, peat and bog.

An experienced hiker, Ken has climbed all the notable peaks of Scotland including the ‘Munros’ by 1990, all the ‘Corbetts’ by 2006 and was well on his way to completing the ‘Grahams’ (completed in 2014). That day his objective was the remote hill called Beinn a’ Chàisgein Beag, classified as a ‘Graham’ it rises to 682m above sea level.

Ken Critchley has Munroist No. 727 at the Scottish Mountaineering Club.

Also an experienced hiker, London-based Mike Price has an unusual track record of finding strangers’ lost items, including a pair of spectacles, a spectacle lens, several sets of house keys, and a set of car keys. This is his second camera find.

A donation has been made in Amateur Photographer’s name to Blood Cancer UK in lieu of a fee for the contributor.

It’s not the first time a lost camera has been reunited with its owner, but it’s perhaps one of the longest lengths of time between being lost and found, at 12 years, and it’s a good job Ken made sure to include his details on a photo on the camera!