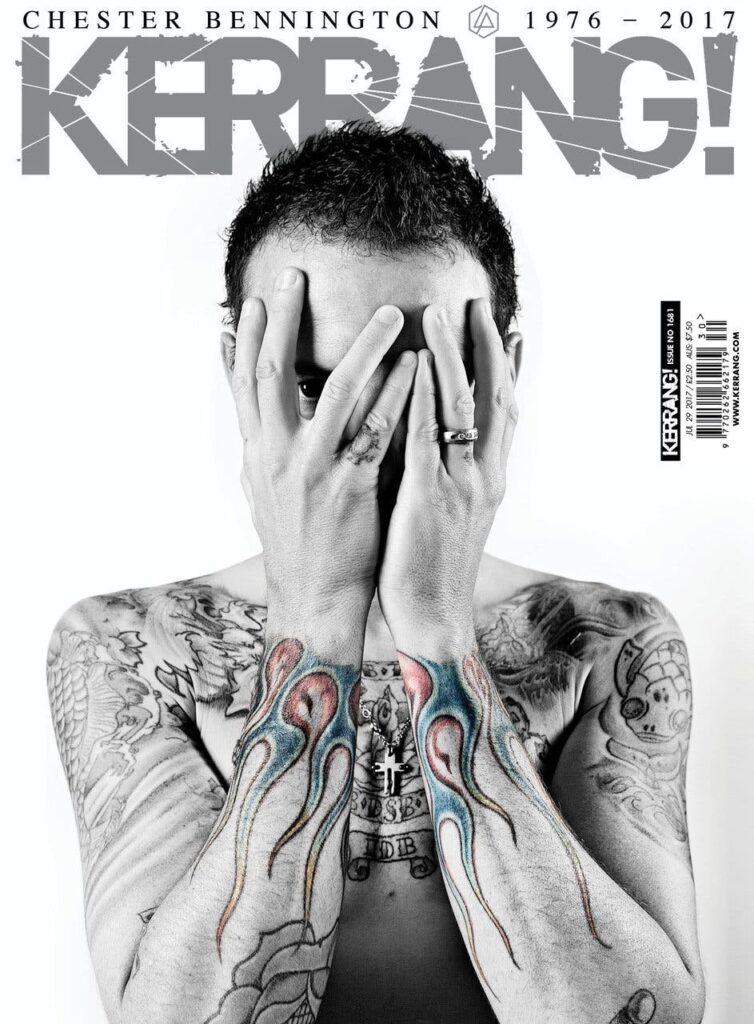 “Magazines always wanted shots of him with his shirt off, I am sure he found this tedious, but he never made a fuss about it,” says photographer Paul Harries about photographing Chester Bennington. “These shots were not used at the time but when the news came through about his death, I was asked to find something unseen for the cover of Kerrang! Magazine.” Paul was fortunate enough to photograph Chester over the years, and he shared a few memories with us.

Paul is running a print giveaway on his website until the end of June, 2022. You should take a look.

I’m writing this story while listening to One More Light by Linkin Park; which is an incredibly emotional song. My relationship with their music is incredibly emotional. When I was 14, I was caught in the middle of a messy divorce and went through such a stressful time that I was hospitalized with shingles. Upon returning home, I’d listen to Linkin Park’s Hybrid Theory on repeat. I’d like to think that the voice of Chester Bennington continues to bring most millennials back to a certain time in their life. That’s what makes this interview with photographer Paul Harries so incredibly emotional for me. On July 20th, 2022, it will be five years since Chester passed.

Chester and his music touched many people. His words went on to influence other artists in various ways. And we hope this brief interview will touch you.

Paul Harries: One of my art teachers converted his stockroom into a darkroom. For one lesson we made pinhole cameras with black & white photo paper acting as film, watching those prints develop under the red light was magical. I was 11 or 12 at the time.

Phoblographer: What made you want to photograph musicians?

Paul Harries: Growing up I had always been a big music fan so when I was old enough to start going to gigs, I wanted to capture that on film. One of my favorite venues was the hot and sticky Marquee Club. There was never a problem getting in with a camera. It was actually here that led to my first photos being published, a merch guy I knew saw I had a camera and I ended up shooting some images for his fanzine. This actually led to me shooting for Kerrang! Magazine. This was way back in 1990 and I am still shooting for them today.

Phoblographer: You’ve photographed Chester many times. Can you tell us a story about a session with him that you felt was really unique to him?

Paul Harries: I was really lucky to shoot Chester before Linkin Park became huge stars. I think this helped with shoots as he always remembered me. Magazines always wanted shots of him with his shirt off, I am sure he found this tedious, but he never made a fuss about it. I went to Los Angeles in 2011, we had taken the shots required for the magazine but we had some time left to experiment a little bit. Chester started to cover his face with his hands and it looked really interesting. These shots were not used at the time but when the news came through about his death, I was asked to find something unseen for the cover of Kerrang! Magazine. When I looked at that unused image, I knew it has to be the one and the team agreed.

Phoblographer: Over the years, what do you think were some of the biggest changes you saw in Chester?

Paul Harries: To be honest I didn’t notice much change, Chester was always a really friendly, nice guy. A pleasure to photograph on and off stage.

Phoblographer: Have you ever looked at your images and thought he looks a bit like Scott Weiland from STP? I know he took over for Scott for a time.

Paul Harries: Not really, I worked with Scott when he was in STP and Velvet Revolver. I would say they were very different people so that probably prevents me making a visual comparison. Both amazing front men on stage though.

Phoblographer: What’s your favorite photo that you shot of Chester, and what’s the story behind it?

Paul Harries: I think the shot used on the tribute issue of Kerrang that I mentioned earlier, it seems to strike a chord with fans.

There is another shot that was taken that day of him walking away from camera with his head slightly down, that image seems to have new meaning now he is gone.

PAUL HARRIES IS A RENOWNED LONDON-BASED MUSIC PHOTOGRAPHER MOST KNOWN FOR HIS WORK WITH A WIDE RANGE OF BANDS – OVER THE COURSE OF MORE THAN TWO DECADES, IF A GROUP HAS EMERGED THAT ARE LOUD AND PROUD OF IT CHANCES ARE ITS MEMBERS HAVE STOOD IN THE FRAME OF THIS MAN’S LENS.

ARMED WITH A VALID PASSPORT, HIS FAITHFUL CANON, AND A KEEN EYE FOR DETAIL, PAUL HARRIES HAS AMASSED A PORTFOLIO THAT AMOUNTS TO NOTHING LESS THAN A MUSIC FAN’S DREAM. AS A RESPECTED FREELANCE PHOTOGRAPHER, PAUL HAS CLOSED HIS SHUTTER ON SUCH LUMINARIES AS NIRVANA, MUSE, GREEN DAY, METALLICA, BIFFY CLYRO, OZZY OSBOURNE, RED HOT CHILI PEPPERS, BLINK 182, LINKIN PARK, AND SLIPKNOT.

OVER THE PAST FEW YEARS PAUL HAS EXHIBITED HIS PHOTOGRAPHS IN PRESTIGIOUS VENUES IN LONDON, MANCHESTER, AND LOS ANGELES. HIS BOOK, “SLIPKNOT: DYSFUNCTIONAL FAMILY PORTRAITS” IS OUT NOW.

All images provided to us with permission by Paul Harries. Be sure to visit his website, Linkin Park gallery, and Instagram.