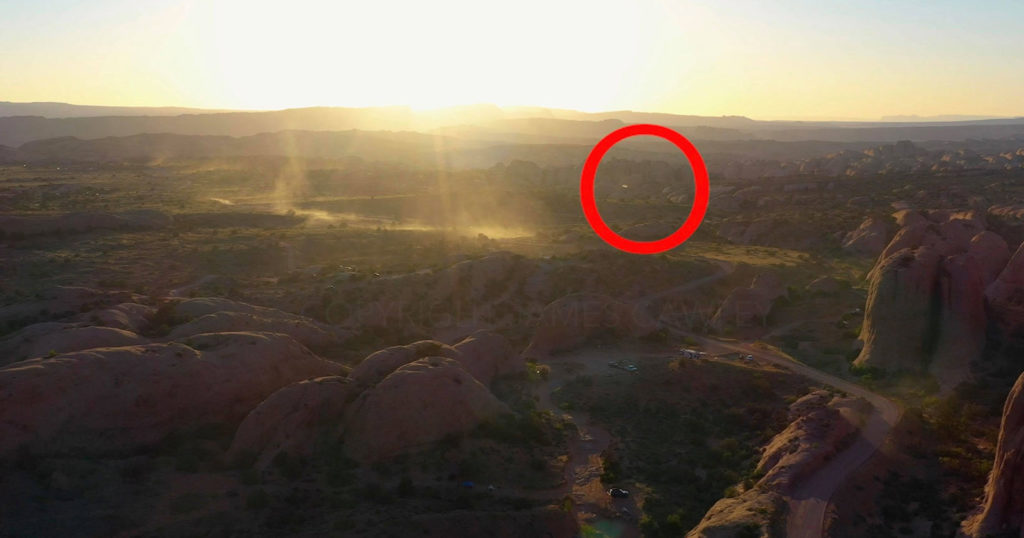 Photographer and filmmaker James Cawley was well aware of the recent interest in UFOs as he watched two ovular-shaped objects fly quickly through the screen of his DJI Mavic 2 Pro drone while filming the sunset in the Moab area of Utah. The objects were obvious enough that Cawley immediately turned after viewing the second one.

With this month’s release of the U.S. government’s highly anticipated report on Unidentified Flying Objects, the buzz surrounding UFOs is at an all-time high. While the initial findings in the report don’t say these unexplained sightings are from an extraterrestrial origin, the government hasn’t ruled the possibility out either.

“The most obvious assumption would be that these were bugs or birds,” Cawley told PetaPixel. “I’ve seen many of them flying backlit like this over the years. What made me question these objects was the speed. Since I had a Tiffen 1/8th Neutral Density filter on, the shutter speed of the video is 1/60th of a second and my drone was less than 200 feet above me when I saw these pass. I turned to watch them fly over the horizon behind me and they glinted like metal from the low sun.”

Viewers have offered other ideas, such as a bullet or a DJI FPV racing drone. A bullet seems almost impossible since the average bullet travels at 1,700 miles per hour, which would be much too fast for a DJI Mavic 2 camera to capture. While Cawley also can’t rule out the other possibilities, there is one thing that doesn’t fit into this hypothesis.

“I didn’t hear a thing,” he says. “It was pretty silent out there like it usually is in the remote parts of Moab. If it was bullets, I should have heard a gunshot echo through the red rocks. If it was drones, I would most likely have heard them buzz by as this was less than 200 feet above me.”

Cawley tells PetaPixel this isn’t the first strange thing he has seen in this remote desert area of Utah.

“Being the Producer and Director for a Creative Agency that works closely with Utah Tourism, I have posted other strange things to my Instagram account before. The desert is a strange and unique place, that’s one reason I love it so much. I’ve been on Mesa tops on summer nights where you can watch the stars move due to the heat distortions in the canyons below creating a magnification effect,” he says.

“I’ve seen meteorites explode, leaving an eerie green cloud of dust. The only other ‘unexplainable’ thing I encountered was when I was working on a video project for Zeiss Lenses and went way out into the desert to capture a night timelapse of an old windmill. About halfway through my timelapse something very bright flew slowly right over me with no noise,” he recalls.

“I was happy when I began to edit and noticed that it did show up in the frames I captured. At first, I assumed it was a low-flying airplane, but there was no sound. I became more confused after I realized how slow it must have been going since it took a couple of seconds to cross the frame and I was taking 30-second exposures. You can see it in the closing scene of the timelapse film.”

Regardless of what the correct answer is, bugs, bullets, drones, or aliens, this video shows what fits nicely under the definition of UFOs — these truly are Unidentified Flying Objects.

Image credits: Photos by James Cawley and used with permission.