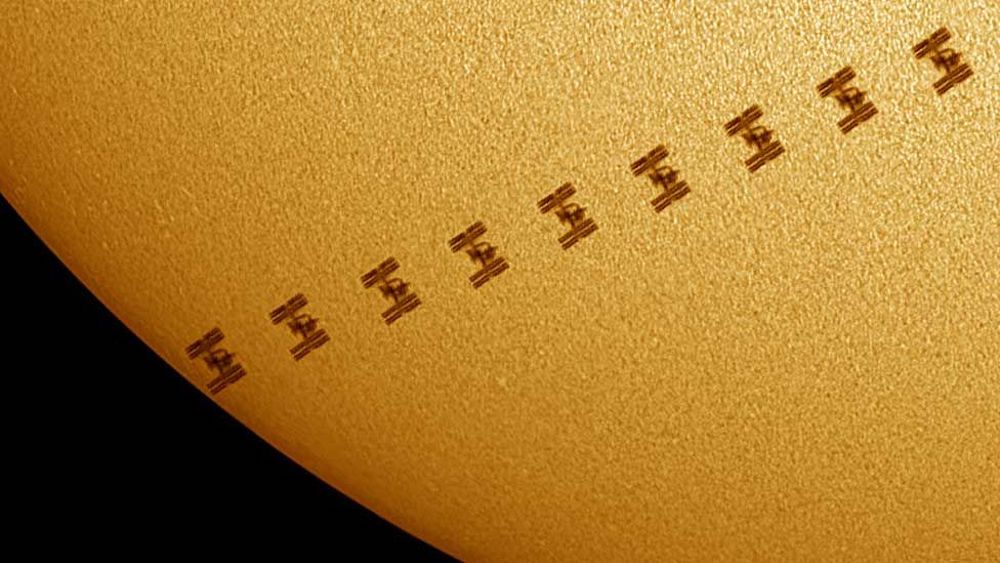 Photographer Jamie Cooper, who is a keen amateur astronomer, has shot some amazing images of the International Space Station (ISS) silhouetted in front of the Sun from his back garden in England.

Cooper had worked out that there was the potential for the ISS to be visible above his home in Whilton, near Daventry, Northamptonshire, on the morning of 17 June 2022.

The ISS travels at 17,000mph and was caught here during a one second shoot. © Jamie Cooper Photography

The story was first reported in Cooper’s local newspaper the Northampton Chronicle and Echo.

He shot the ‘entire transit’ of the ISS across the Sun at 10:22 BST, an event which lasted less than a second, using a telescope and a high-speed video camera.

The ISS passing in front of the Sun with sun spots visible. © Jamie Cooper Photography

Cooper said his very high-speed video camera was shooting at 80 frames a second, compared to the normal speeds of video cameras, which usually shoot at between 25-30 frames per second.

He revealed, ‘This was an opportunity not to be missed. I shot the entire transit event, that lasted less than one second, using a high-speed ZWO ASI290MM video camera, capturing frames of one millisecond exposure at 80 frames per second.’

He added, ‘It’s important to say I use a specialist telescope with a filter because you should never look at the Sun without a filter – it can lead to permanent blindness.’

The International Space Station has been in operation since 1998. It orbits the Earth roughly 15.5 times a day.

The ISS currently has three cosmonauts and four astronauts onboard as part of Expedition 67.

Just the day before Jamie Cooper took his amazing images, on 16 June 2022, the ISS had to swerve to avoid colliding with space debris from Russia’s Cosmos 1408 satellite, which the country obliterated in November 2021 during its ‘anti-satellite missile test’ (ASAT).

Shooting the night sky: tips from Astronomy Photographer of the Year winners