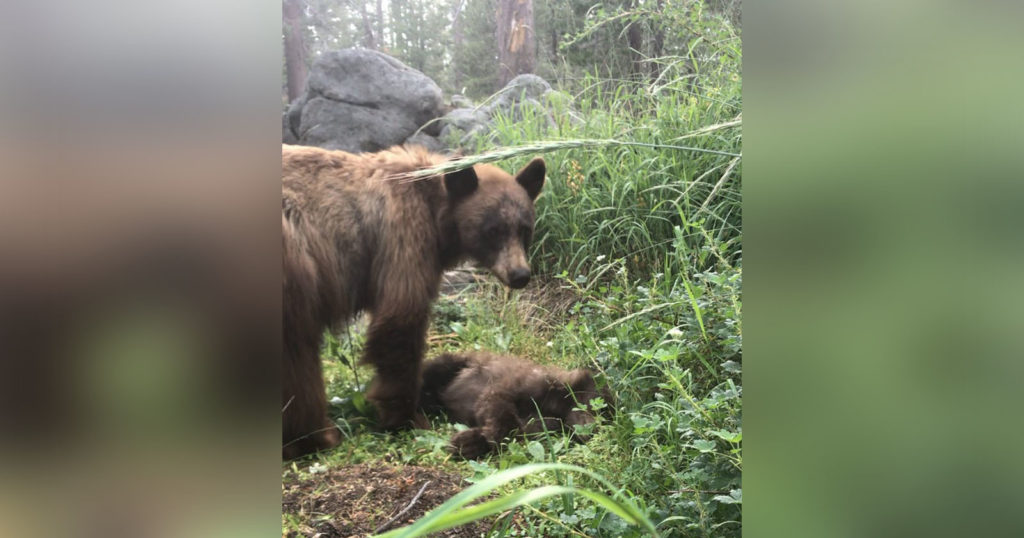 A Yosemite National Park ranger has shared a heartbreaking photo and story about discovering yet another bear struck and killed by a driver in the park.

The unnamed park ranger published the account on the park’s official Facebook page shortly after receiving the call last Friday.

“We get this call a lot,” the ranger writes. “Too much, to be honest. ‘Bear hit by vehicle, dead on the side of the road.’ Sadly, it’s become routine.”

After driving an hour to reach the provided coordinates, the ranger arrived sometime after 5pm and prepared to locate the bear, move its body away from the road, fill out a report, and collect data for research.

“Then I’m off on my way again with another number to add to the total of bears hit by vehicles this year—data we hope will help prevent future collisions,” the ranger writes. “Pretty callous. However, the reality behind each of these numbers is not.”

The ranger finally spotted the cub’s body down an embankment after noticing a broken car part in the middle of the road.

“It’s a new cub—couldn’t be much more than six months old, now balled up and lifeless under a small pine tree,” the ranger says. “For a moment I lose track of time as I stand there staring at its tiny body, but then the sound of more cars whizzing by reminds me of my place and my role. I let out a deep sigh and continue on with my task.”

The ranger had moved the cub to a safe place and was in the middle of performing the assessment — it was a female cub only a little more than 25 pounds — when they were startled by a sound nearby.

“[…] I hear a stick break and look up,” the ranger writes. “Just beyond the ring, there’s a familiar figure intently staring back at me. It’s another bear. Surprised, I stand up quickly and the bear runs off into the brush but stops not far off and looks back at me. Acting on instinct, I pick up a stick and smash it over a tree to scare the bear further away. I stand there quietly, listening as I hear the bear’s footsteps tapper away.

“[…] But then I hear it, and it changes my mind completely. From behind me, there’s a deep-toned but soft-sounding grunt. I immediately know what it is. It’s a vocalization, the kind sows (female bears) make to call to their cubs. I turn and look in its direction and there she is, the same bear from before intently staring back at me. It’s no coincidence. I can feel the callousness drain from my body. This bear is the mom, and she never left her cub.

“My heart sinks. It’s been nearly six hours and she still hasn’t given up on her cub. I can just imagine how many times she darted back and forth on that road in attempts to wake it. It’s extremely lucky that she wasn’t hit as well. The calls to the cub continue, sounding more pained each time. I glance back finding myself hoping it would respond to her call too, but of course, nothing. Now here I am, standing between a grieving mother and her child. I feel like a monster.”

Over 400 collisions between vehicles and bears have occurred on roads in Yosemite since 1995, making them one of the leading causes of black bear mortality in the park, and there have been efforts to raise visitor awareness of how frequently these accidents occur. Signs in the “Red Bear Dead Bear” initiative can be found in locations where collisions have occurred in the past.

But this viral photo by an anonymous park ranger may go further in raising awareness than those signs. The ranger concludes the story by explaining why they shot and shared the photo:

“Why? Every year we report the number of bears that get hit by vehicles, but numbers don’t always paint a picture,” the ranger writes. “I want people to see what I saw: the sad reality behind each of these numbers.

“So please, remember this. Remember that when traveling through Yosemite, we are all just visitors in the home of countless animals and it is up to us to follow the rules that protect them. Go the speed limit, drive alertly, and look out for wildlife. Protecting Yosemite’s black bears is something we can all do.”