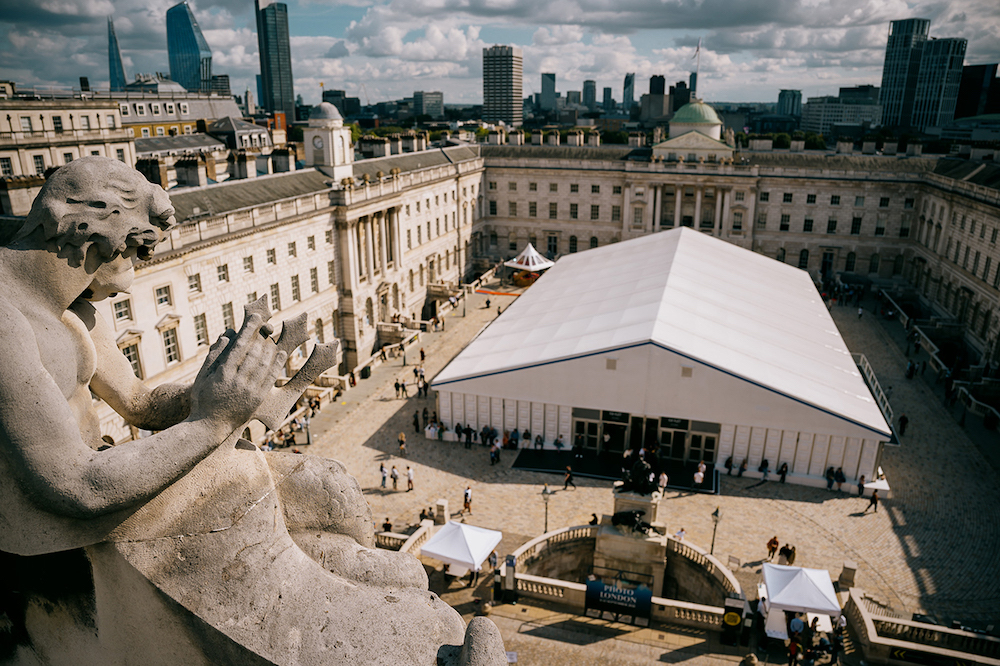 The final programme for the Photo London 2022 international photography fair has been confirmed with 106 exhibitors from 18 countries presenting photography in all its forms – ranging from images from the 1850s to new work that’s redefining the medium.

Fair founders Michael Benson and Fariba Farshad commented, ‘Photo London’s mission has always been to show the best of the past, present and future of photography. This edition is no exception, presenting exhibitors and artists whose work not only delights and surprises, but in many cases also challenges assumptions about what photography can be.’

The physical Photo London show will be held at Somerset House, London, from Thursday 12 May till Sunday 15 May, whilst the third edition of Photo London Digital will run from 11-29 May 2022.

Galerie Sophie Scheidecker (Paris) will display works by Irving Penn, amongst others.

The Grob Gallery (Switzerland) will present the works of William Klein and Magnum Photos will showcase works by Khalik Allah, Bruce Davidson and Yael Martínez.

A special booth will be dedicated to photography collector and gallerist Peter Fetterman’s The Power of Photography – a project inspired by the long months of lockdown, during which Fetterman posted one iconic image per day in a digital collection.

The exhibition ties in with the recently published book The Power of Photography (ACC Art Books).

James Hyman Gallery (London) will present rare ‘self-portraits’, dating between the 1850s and the 1890s, by one of the greatest figures in the history of photography – the Countess of Castiglione.

Lee Miller Archives presents Surrealist Eye, focusing on the Surrealist way of seeing in Lee Miller’s work through the many chapters of her life and will be shown alongside works by her husband Roland Penrose.

The Discovery section for emerging galleries offers an opportunity to check the pulse of what’s going on at the frontiers of photography.

Galleries from near and far

Galleries from 35 cities will be represented at this year’s fair. Among these are galleries returning from territories that were unable to attend in September 2021, including Galerie Thomas Zander (Cologne), Persons Projects (Berlin), Reflex (Amsterdam), Versus Projects (Istanbul) and US dealers Euqinom (San Francisco) and Holden Luntz (Palm Beach).

193 Gallery (Paris) will be showing works by the young artists Derrick Ofosu Boateng from Ghana and Thandiwe Muriu from Kenya.

Exhibitors will also be representing photography from Latin America with Carcara Photo Art (São Paulo) presenting previously unpublished photographs by Luiz Antonio Nogueira Garrido of John Lennon with Yoko Ono from 1969, during their honeymoon in Paris and the recording of Give Peace a Chance.

Albumen (London) is showing a Latin American Salon with works by four photographers from Brazil, Bolivia and Columbia, whilst ALMANAQUE fotográfica (Mexico City) will present a group show of Mexican and French photographers.

Several galleries are devoting their booths to supporting Ukraine.

Alexandra de Viveiros (Paris) is presenting seven artists belonging to the celebrated Kharkiv School, which forged a new iconography in the 1970s that defied the codes of socialist realism and repressive censorship.

Ilex Gallery (Warsaw) is exhibiting works of the most outstanding contemporary photographers alongside legendary artists from the Kharkiv school.

The funds raised from the sale of these will immediately go to grass-roots charities to help those suffering from the humanitarian crisis.

UK exhibitor highlights include The Photographers’ Gallery with a series of works by the distinguished Iranian photographer Gohar Dashti.

Imitate Modern will be showcasing the work of Tyler Shields, whilst The Gallery of Everything is presenting a selection of photographic works from the canon of 20th century alternative art makers.

Iconic Images is presenting Rockers, Royals and Rebels, including works by Gered Mankowitz, Kevin Cummins and Bill Wyman, who will all be doing special book signings during Photo London 2022.

The Master of Photography exhibition this year is Nick Knight: Future, which showcases key works across Nick Knight’s career, from the 1980s till today.

Spanning fashion, portraiture, still life and landscape, the works are realised as photography, film, installation and a vast new sculpture.

Nick Knight explained, ‘being a photographer is actually not about what you see, it’s about what you feel and that feeling can be transformed into any art form. We are probably in the most exciting time for creativity ever.’

The second exhibition in this year’s Public Programme is a homage to the legendary photographer Frank Horvat (1928-2020).

Throughout a career that lasted seven decades, Horvat was constantly experimenting and adapting to new technologies making work that transcended the prevailing photographic orthodoxy and revolutionised fashion photography.

Curated by his daughter Fiammetta Horvat, the exhibition focuses on Horvat’s fashion work for leading magazines and images depicting Paris at night.

Photo London has also released details of its Talks Programme, which will be held both at the fair and online.

The talks include artist Anastasia Samoylova in conversation with writer, curator, artist, and educator David Campany.

Visual artist Melanie Manchot will talk to Dr. David Dibosa about her multifaceted and performative practice that embraces photography, film, video and installation.

Photo London’s Official Partner, Nikon, has a strong line-up of talks. These include fine art portrait photographer Therese Asplund, photographer and director Conor McDonnell and doctor/photographer Jon Williamson (who will be discussing challenges in documentary photography).

To reserve a place at a talk visit Photo London: 2022 Talks Programme.

Tickets for Photo London are on sale now. To discover the full range of ticket options just go to Photo London Tickets.