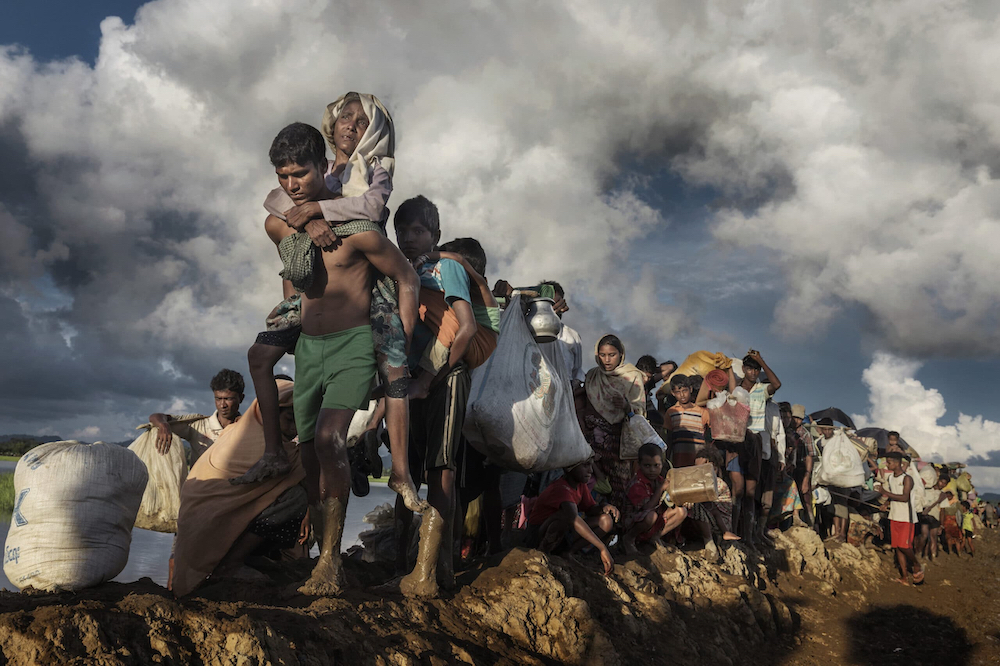 The International Women’s Media Foundation (IWMF) has announced that freelance US photojournalist Paula Bronstein is the 2022 recipient of the eighth annual Anja Niedringhaus Courage in Photojournalism Award.

The award recognises women photojournalists who exhibit extraordinary courage and humanity in reporting from areas of instability, oppression, and conflict.

It was created in honour of the German Associated Press photojournalist Anja Niedringhaus, who was killed in Afghanistan in 2014. Niedringhaus was a recipient of the IWMF Courage in Journalism Award in 2005.

Bronstein’s winning portfolio highlighted afflictions affecting communities across Afghanistan following the Taliban takeover in 2021, how war upends the life of the elderly in Ukraine and the migration of the Rohingya out of Myanmar to Bangladesh. Bronstein won a $20,000 prize, which was made possible by the Howard G. Buffett Foundation.

Paula Bronstein explained, ‘My entire career I’ve focused on capturing the features and the effects that surround conflict. I knew Anja, and I was in Afghanistan when she was killed in 2014; she looked where others did not, and that ability to hold the gaze of a community is something I work toward. Winning this award is humbling and I am honoured to think about my work as continuing her image.’

Opytne, Eastern Ukraine: Mariya Gorpynych, age 76, lives alone. She holds new chicks delivered by ICRC as part of a humanitarian aid service for elderly that live alone. It also allows them to raise chickens for some income. She speaks with tears in her eyes when talking about the death of her son. Victor, 48, was killed due to the war in 2016, he was fatally injured by shelling that hit the home. He died in her hands. Her husband, died in the same year from a heart attack from extreme stress of living too close to the front line. Mariya refuses to leave her village because her family are buried there.”I have nowhere to flee, my whole family is buried here. I got used to the continued shelling.” Opytne is a war torn village on the contact line where only 43 people are left due to the dangers. © Paula Bronstein, courtesy IWMF

Bronstein revealed, ‘My portfolio shows the diversity of my career, how I work, and how I see. From war to natural disaster, to epidemics and addiction; it’s never easy. But it’s important to be able to bear witness in a way that’s not graphic or exploitive, to make a strong statement, and – when needed – hold power to account. As a veteran journalist, and a woman, it’s so meaningful for me to accept this award. To know Anja and to receive this in her name, means that my age doesn’t matter: my passion for my work, my energy, and my ability to do my job is what matters. The industry does not always view women in this way, and I am proud to portray what’s possible.’

Bronstein’s career spans four decades working across multiple continents and includes the publication of her acclaimed photo book, Afghanistan: Between Hope and Fear, in 2016.

Paula Bronstein is best known for her work documenting humanity and covering compelling issues with extensive expertise in many of the world’s conflict regions. She is currently working in Kyiv, Ukraine.

Thousands of exhausted Rohingya refugees fleeing from Myanmar walk along a muddy rice field after crossing the border in Palang Khali, Cox’s Bazar, Bangladesh. Well over 755,000 Rohingya refugees have fled into Bangladesh since late August during the outbreak of violence in Rakhine state causing a humanitarian crisis in the region with continued challenges for aid agencies. © Paula Bronstein, courtesy IWMF

Two other freelance women photojournalists were recognised this year as honourees – Carol Guzy (US) and Farzana Wahidy (Afghanistan).

Guzy, who knew Anja Niedringhaus, was honoured for her portfolio that demonstrated the universal emotion within communities rebuilding following tragedy, including stories from Albania, Georgia, Iraq, Haiti and Syria.

In 2018 Guzy was awarded the Robert Capa Gold Medal for her efforts documenting the effect of the war on ISIS on the civilians of Mosul, Iraq. She is currently a contract photographer with ZUMA Press and is on assignment covering the conflict in Kyiv.

Guzy commented, ‘I strive to make images that illuminate those who are most vulnerable and mired in the shadow of man’s inhumanity. As journalism evolves, so does the definition of courage; Anja’s legacy is her spirit of bravery and empathy. There are few honours that mean as much as being part of her legacy.’

KANDAHAR, AFG: At the Mirwais Regional hospital in the Pediatric malnutrition ward, Fatima, holds her grandson, severely malnourished Safatullah, 7 months only weighing 3 kg, his mother died during after giving birth, so this grandmother has four children to care for. The Kuchi are nomadic ethnic tribe, they are extremely poor. Many parts of the country face starvation this winter. The Mirwais regional hospital, the main in southern Afghanistan, is already facing a rapid increase in child malnutrition cases. © Paula Bronstein, courtesy IWMF

Farzana Wahidy’s portfolio of women in Afghanistan captured across 20 years was recognised for its singularity in storytelling among people whose lives are under threat every single day.

Wahidy is an award-winning Afghan documentary photographer and the first woman photographer in Afghanistan to work with international media agencies.

In 2004 she began working as a photographer for Agence France Presse (AFP) and later joined the Associated Press (AP).

She has received numerous awards and grants from organisations such as the Open Society Institute, National Geographic All Roads Film and Photography Program, the University of Missouri, and Mountain Film.

In 2014, Wahidy created a project to train Afghan photographers, to review copyright law, and to research the history of photography in Afghanistan. In 2016 she established the Afghanistan Photographers Association.

A policeman shines a flashlight on a man suspected of overdosing as drug addicts are seen smoking heroin and methamphetamine in an area where hundreds of users shelter live in squalid conditions at Pul-e-Sukhta, under a bridge in western Kabul, Afghanistan. © Paula Bronstein, courtesy IWMF

IWMF’s executive director, Elisa Lees Muñoz, commented, ‘There are so many women photojournalists working today – against an alarming gender disparity in the industry – because they believe in illuminating truths much of the world does not always see. It is an honour for the IWMF to award Paula and recognise Carol and Farzana in Anja’s image today. These brave women show us the strength, determination, and resolve it takes to push onward and look where others do not.’

The jury panel commented, ‘This year’s acclaimed portfolios all exhibit work that personified Anja’s values. For Paula, Carol, and Farzana, it’s evident that photojournalism is their second realm of existence, just as it was for Anja. We congratulate these brave women for their achievements and extensive work bringing critical and memorable stories to the forefront.’

Founded in 1989, the IWMF is the only global non-profit organisation that offers emergency support, safety training, grants, reporting opportunities and funding avenues specifically for women journalists.

It strives to make more women’s bylines possible and works tirelessly to ensure a greater diversity of voices is represented in the news industry worldwide.

To find out more go to the IWMF website.

Book review: Afghanistan Between Hope and Fear by Paula Bronstein

Can photojournalism survive? The industry speaks out…