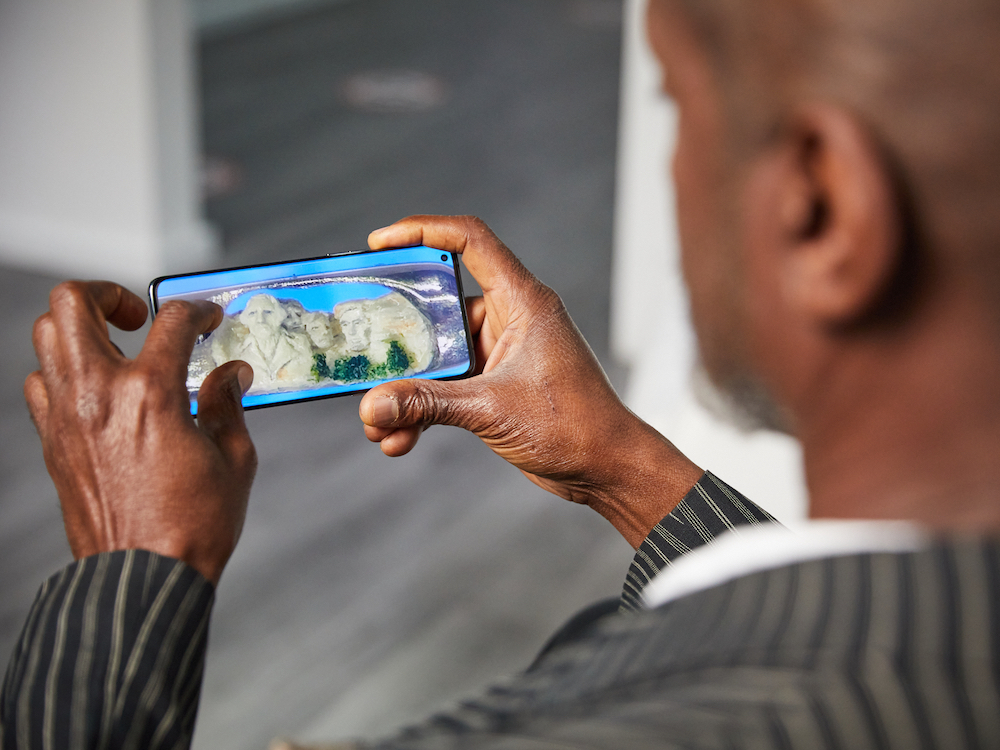 Thanks to the 60x magnification microscopic lens on the OPPO Find X3 Pro smartphone the record-breaking microscopic artist Dr. Willard Wigan MBE has been able to record the results of his amazingly detailed work, for which he currently holds two Guinness World Records.

Wigan’s sculptures are typically placed in the eye of a needle or on the head of a pin and a single sculpture can be as small as 0.005mm. The two Guinness World Records Dr. Wigan currently holds are for the smallest sculptures ever created entirely by human hand.

A close-up, shot on the OPPO Find X3 Pro smartphone, of a microscopic sculpture of the famous Mount Rushmore monument by Dr. Willard Wigan MBE

The 3MP microlens camera – one of four cameras in the Find X3 Pro – is a 60x zoom and is essentially a type of microscope in your pocket. It is capable of magnifying subjects 30x optically and 60x with ‘hybrid magnification’ and is said to have a close focusing distance of ‘roughly 3mm’. You can discover more about the creation of the microlens here: Why and how OPPO developed the Microlens with Find X3 Pro | OPPO Global

A close-up, shot on the microlens of the OPPO Find X3 Pro smartphone, of a microscopic sculpture of a ‘Little House & Conservatory’ by Dr. Willard Wigan MBE

OPPO’s partnership with Dr. Wigan has seen the production of a new video and imagery collection of Willard’s sculptures and artwork, all of which has been captured on the company’s Find X3 Pro smartphone. Existing fans, and newcomers to his work alike, can now get more of an insight into Wigan’s personal story and a behind the scenes look at his work in a new YouTube video…

Wigan has dyslexia and autism, he struggled at school and was told by his teachers that he would amount to nothing. His mission was set from this young age to achieve greatness by showing the world that nothing could be everything. He found solace and peace in creating art of such minute proportions that it could not be seen with the naked eye.

Wigan continues to follow his late mother’s advice, ‘the smaller your work, the bigger your name’ and challenges himself by striving to make each work even smaller than the one before. He revealed, ‘Working with OPPO to capture my art has been a true delight. I’m genuinely so impressed by the microlens on the Find X3 Pro, which is the only smartphone I’ve ever used which can capture my microscopic art, shining a new light on my creations. From an early age I believed small things are important and there’s another world we can’t see. Just because you can’t see something doesn’t mean it doesn’t exist, and the OPPO Find X3 Pro opens up a world of possibilities. I’m excited for people to discover the microscopic world and discover the smaller things in life in a spectacular way.’

Anna Morgan, OPPO UK’s marketing director, commented, ‘It’s an honour to partner with Willard Wigan and work with such a renowned artist. At OPPO we aim to develop awe-inspiring camera phone technology, and we’re delighted to bring the capabilities of the microlens technology to life by capturing Willard’s microscopic artwork. We can’t wait to continue exploring the intersection of technology and art.’

Wigan is currently working on a Commonwealth celebration sculpture and has collaborated with Graham Short (who is widely regarded as the world’s best micro engraver). In addition, there is a new TV series on Channel 4 this Spring and a script is currently with Netflix for a possible drama series about Dr. Wigan’s life, though no casting decisions have been taken yet.

Getting close up with nature photography

20-bit RAW coming to a smartphone near you