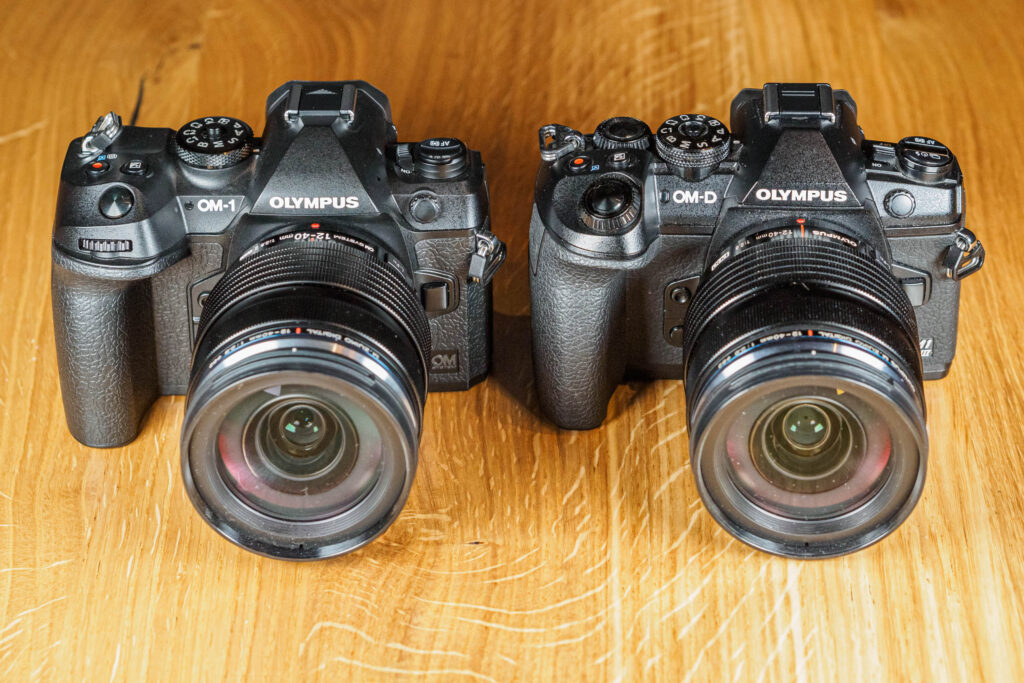 The OM System OM-1 is the latest Micro Four Thirds flagship model from OM Digital Solutions (OMDS) – the camera company formerly known as Olympus. With a prominent Olympus badge on the front of its viewfinder, it provides a degree of continuity between the old and new brands (although in the shops, it’ll be sold as an ‘OM System’ model).

The OM-1 is, very recognisably, a development of its predecessor, the Olympus OM-D E-M1 Mark III, so existing users can essentially think of it as an E-M1 Mark IV. It employs a very similar body design and control layout and is only fractionally larger and heavier. But inside it’s considerably upgraded, with a new sensor, processor and viewfinder. The OM-1 is being introduced with a body-only price of £2000; the E-M1 III is already effectively discontinued.

You can read in detail about the new camera in our detailed OM System ‘Olympus’ OM-1 review, so here we’re going to concentrate on the major differences between the two cameras and the biggest updates that the new model brings.

The first key update of the new OM-1 over the E-M1 III is a brand-new sensor which shares the same 20MP resolution, but now employs a back-side illuminated, stacked architecture. It’s coupled with a new, more powerful TruePic X processor.

OMDS is promising improved image quality, with both increased dynamic range and improved high-ISO noise performance. As a result, the new model offers a standard sensitivity range up to ISO 25,600 that’s extendable to ISO 102,400, compared to ISO 6400 / ISO 25,600 on the E-M1 III.

The sensor introduces a unique quad-pixel AF system with 1053 selectable points (vs 121). Along with face- and eye-detection AF, the OM-1 gains an updated version of the AI-based subject recognition previously seen on the E-M1X. It’s now capable of recognising animals (specifically, cats and dogs) in addition to motor vehicles, trains, planes, and birds.

From the back, the OM-1 closely resembles the E-M1 III. However, it gains a new dedicated AF-ON button for photographers who like to use back-button focusing. As a result, the switch that surrounds the AE-L button (and by default switches between auto and manual focus) is now rather smaller.

Another significant update is the OM-1’s new electronic viewfinder. This is a 5.76m-dot OLED unit that offers 0.83x (equivalent) magnification – a massive improvement on the E-M1 III’s 2.36m-dot, 0.74x EVF. To make the most of that high-res panel, the viewfinder displays have been updated and refined. The 3in fully articulated touchscreen is also higher resolution, at 1.62m-dot (vs 1.04m-dot).

At long last, there’s also a brand-new colour-coded menu system. With a decidedly Canon-esque design, it rather gives the impression that OMDS is aiming the OM1 at users of high-end APS-C DSLRs, such as the Canon EOS 7D II and Nikon D500, who’d prefer not to put up with the bulk and weight of those firms’ full-frame mirrorless systems (especially with regards to lenses).

There is, incidentally, no significant update to the 5-axis in-body image stabilisation, which promises 7 stops of shake compensation with unstabilised lenses, and up to 8 stops with optically stabilised Olympus optics. It’s a measure of how good the E-M1 III was in this respect, that this still counts as class-leading performance.

Olympus cameras have long been known for excellent weather-sealing, but the OM-1 takes this a step further with an IP53 rating. This means that it’s certified to be protected against dust ingress and being sprayed with water. This rating brings one obvious knock-on effect on the camera design, with the front and rear control dials now recessed into the body, rather than placed on top.

Otherwise, the top control layout is again pretty much identical to the E-M1 III’s. One functional difference is that in stills modes, the movie button activates high-resolution multi-shot mode, which is now more practical  to use thanks to the considerably faster image processor.

If you look closely, you can also spot the OM System branding on the M.Zuiko 12-40mm F2.8 II Pro lens that’s been introduced alongside the OM-1. It’s optically identical to the 2013-vintage original, but boasts improved ZERO and fluorine coatings and is now IP53-rated to match the camera.

Olympus was one of the first to use an onscreen ‘Super Control Panel’ for changing secondary settings without having to dive into the menu system. However, the cluttered design was started to look distinctly dated. The OM-1 brings a neater, simplified design that also allows exposure settings to be adjusted.

Look closely here, and you can see that the ISO button on the OM-1’s shoulder allows images to be star-rated in playback. This is particularly helpful for marking the best shots in a burst.

One welcome update on the OM-1 is that both of its SD card slots now accept high-speed UHS-II media. On the E-M1 III, only one slot was UHS-II compatible.

On the side of the handgrip, both cameras have a 2.5mm remote release socket. However, the OM-1 can be used with the new £69.99 RM-WR1 remote control in a choice of either Bluetooth wireless or wired modes. On older cameras like the E-M1 III and E-M5 III, the RM-WR1 operates in wired mode only.

The OM-1 employs a new battery, with its BLX-1 being CIPA-rated for 520 shots per charge, a useful improvement on the 420 shots provided by the E-M1 III’s BLH-1. Despite its considerably higher capacity (17Wh vs 12.8Wh). it’s also slimmer and less blocky, which means it should fit more readily into battery pouches from the likes of Tamrac and Vanguard.

The battery charges via USB-C, but unlike with the E-M1 III, no mains charger is supplied in the box. However, a BCX-1 USB-C dual charger will be available for £120, while spare BLX-1 batteries cost £80.

The new battery means that the OM-1 also takes a new vertical grip, the HLD-10 (£320), which is IP53-rated to match the body. One welcome improvement this brings over the E-M1 III’s HLD-9 is the addition of a focus-area joystick. The second battery that’s housed in the grip can be charged via the camera’s USB-C port.

Naturally, the OM-1 comes with an array of upgraded video specifications, most notably 4K recording at 60fps and Full HD recording at 240 fps. Colour output is 10-bit, with a choice of H.264 and H.265 formats. In addition, 4:4:4 C4K ProRes RAW can be output to an external recorder via the micro HDMI port.

As usual, 3.5mm stereo microphone and headphone sockets are onboard for recording and monitoring audio. One subtle improvement which videographers should appreciate is that the microphone socket has been raised on the body, so it no longer obstructs the screen articulation.

So there you have it, a tour of the OM System OM-1’s major updates compared to the Olympus OM-D E-M1 Mark III. Whether these together count as enough to tempt existing users to update will, as always, be very much a personal decision. While the improved sensor is certainly welcome, the uprated weather-sealing, subject detection AF and vastly improved viewfinder may be of just as much practical importance.

The OM-1 also, of course, counts as a major upgrade for users of Olympus E-M10 and E-M5 series cameras, including the current Olympus OM-D E-M10 Mark IV and Olympus OM-D E-M5 Mark III. It could equally be an enticing option for photographers who shoot sports and wildlife, and don’t want to put up with the large telephoto lenses required by full-frame systems.

With its robust construction, high speed and effective in-body stabilisation, the OM-1’s most obvious direct competitor is the Fujifilm X-T4, which costs £1399 body only. This highlights our biggest concern about the new OM-1: its £2000 body-only price.