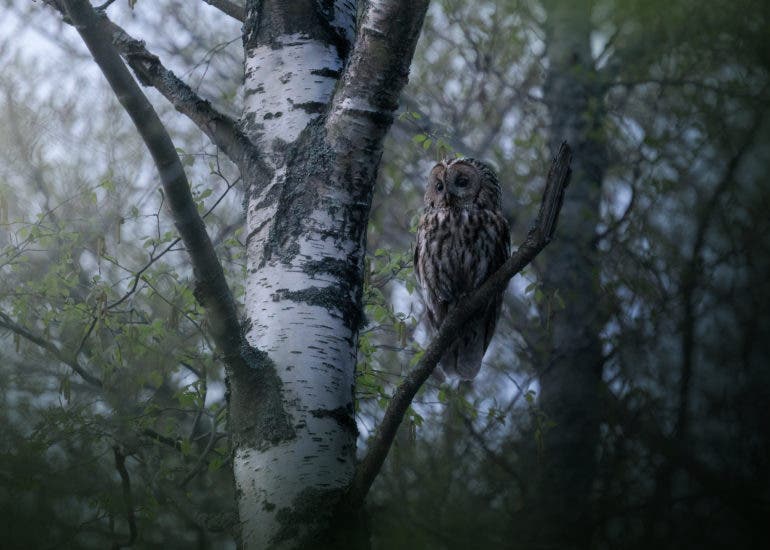 We’re streaming daily on Apple Podcasts, Google Podcasts, Stitcher, Pocket Casts, and Spotify! You can also listen to it right here on the Phoblographer.

“It’s not uncommon to be outside five days in a row and not get the shot you’re after”, says Swedish photographer Olle Nilsson about his extended hobby. On most days, he’s up long before the crack of dawn, in pursuit of animals in the forests of his vicinity. These early hours seem to pay off as he captures stunning images of the wildlife in Sweden. He considers himself to be a nature photographer, and in this interview, shares with us his optimistic hopes for the future.

It’s never easy to photograph wildlife. Apart from the considerable investment in gear that you might need, there are also endless hours of waiting for the perfect shot. One might ask the question: what is the perfect wildlife shot? Tough to say, but if you take a look at Olle’s profile on Instagram, you’d agree with me that he’s captured a considerable amount of them. What I love most about them is the ethereal look and feel of his work. The magical, mysterious aura that seems to be shrouding the subjects in front of his lens. And then there are the pictures where the animals seem to be looking right back at him, almost posing for his lens. It all adds up to produce some mesmerizing nature shots.

A steady tripod is important when shooting owls at a low shutter speed. I use the Sirui N-3203X paired with a gimbal head also from Sirui (PH20). As for camouflage equipment, I use products from the brand Tragopan. I have a tent hide I use on planned shoots and also a camouflage suit for wandering the forest by foot. The camouflage really helps getting closer to wildlife, partly to not scare them away, but more importantly not disturb them as much.

The Phoblographer: Hi Olle. Please tell us about yourself and how you got into photography. When did you decide that you want to focus more on taking pictures of wildlife?

Olle Nilsson: I’ve been playing the guitar since I was 14 years old, that guitar playing turned into music production. While doing music production, my interest for photography started to grow and I got myself my first DSLR. This was 2016, and in 2019 I photographed my first animal, and have been hooked since then. Today, I live in Linköping, Sweden, with my family. I’m working in retail at the moment, but my goal is to go full-time for wildlife photography and content creation at the beginning of 2022.

The Phoblographer: Your work is a lot more cinematic in terms of the results, compared to other wildlife photographers. How do you achieve this kind of look?

Olle Nilsson: This is a combination of good light, composition and post-processing. I work with both Lightroom and Photoshop to achieve the cinematic look, but the most important part comes from being out before or after sunrise.

The Phoblographer: When they’re in their natural environment, it can’t be easy to get them to look right at you. How does it feel when they make eye contact with you and look back curiously?

Olle Nilsson: Yes, it’s not easy, but most of the time, I don’t want them to look at me. The best feeling is when you are photographing an animal without the knowledge of you being there.

The Phoblographer: Have you ever found yourself looking at these animals in awe, putting aside the camera some times? Do you think we miss such moments if we’re constantly looking through our lenses to get the next best shot?

Olle Nilsson: Yes definitely, I constantly have to remind myself to just watch. But that’s after getting the shot. It’s something special watching owls in real life. Their movements kind of reminds me of CGI sometimes.

The Phoblographer: One of these must have been the hardest of all to capture. Please take us through what it took to get that image

Olle Nilsson: I’ll have to say the photo of the Great Grey Owl (GGO). The amount of hours I’ve been out searching for any traces of the GGO are countless. In this case, me and two friends were out, and we heard this weird noise coming from the forest. What we heard was the begging call of three juvenile great grey owls.

Then we spent days, mostly at dusk and dawn, just waiting for the adult GGO to choose a perch close to us. It’s important to not walk around too much where the owls are hunting, since they’re using their incredible hearing, and we might disturb the natural behavior of the prey, which could result in starvation of the juveniles. You have a lot of responsibilities when photographing wildlife.

After being patient for many hours, she finally landed on this low, perfectly placed perch. That feeling is why I love wildlife photography.

The Phoblographer: There’s obviously a lot of waiting and sleep loss while heading out to photograph animals in their surroundings. How much of a toll has it taken on you and how do you keep yourself refreshed for the next image?

Olle Nilsson: I have a son of one and a half years. Being a father and at the same time work my 9-5 and my photography business is a lot of work. I work every single day to do this full-time. Balance is important and family comes first. I get motivated and energized after a day with my family. As soon as my son is asleep, I get my pre-packed bag and head out to the forest.

The Phoblographer: Normally it’s you chasing the animals (not literally), but have you had any unforeseen incidents with animals charging at or attacking you?

Olle Nilsson: I’ve never been attacked by an animal. I’ve scared animals away, which never is a great feeling.

The Phoblographer: What’s the success rate like for wildlife photography like yours? How many keepers do you typically get after a shoot?

Olle Nilsson: Wildlife photography is unpredictable. If I’m out looking for a specific owl, I stumble across many different animals to photograph. This has led to one of the coolest encounters of my career – the wolf.

The Phoblographer: Is there a much better appreciation for animals and flora after becoming a wildlife photographer?

Olle Nilsson: Yes, yes, and yes. My interest in species and flora has become a big part of my life since I started photographing wildlife. I’ve learned a lot about our planet and the importance of biodiversity.

The Phoblographer: I wonder how much longer these animals will be around in such numbers. How can we spread awareness of global deforestation through our photography?

Olle Nilsson: It’s so sad to think about, but we all need to think about it and keep on spreading awareness.
We have one of the most powerful tools in history, social media. We need to keep on posting images of nature and wildlife, and at the same time spread the importance of how to behave when we’re out in the forest.
I think it’s quite simple; I have many friends who after starting photographing wildlife, becoming more and more aware of the global issues we’re facing. If we are many gathered – working together is a lot more powerful.

What I think, finding more sustainable ways of forestry is not up to each individual; it’s up to the politicians and landowners. But if more people bring nature into their lives and start to live with nature, it will have a hugely positive effect on it all. Let’s keep sharing our stories and encounters with nature because we’re in this together, but everybody doesn’t know that yet.

All images by Olle Nilsson Used with permission. Visit his website and Instagram page to see more of his work