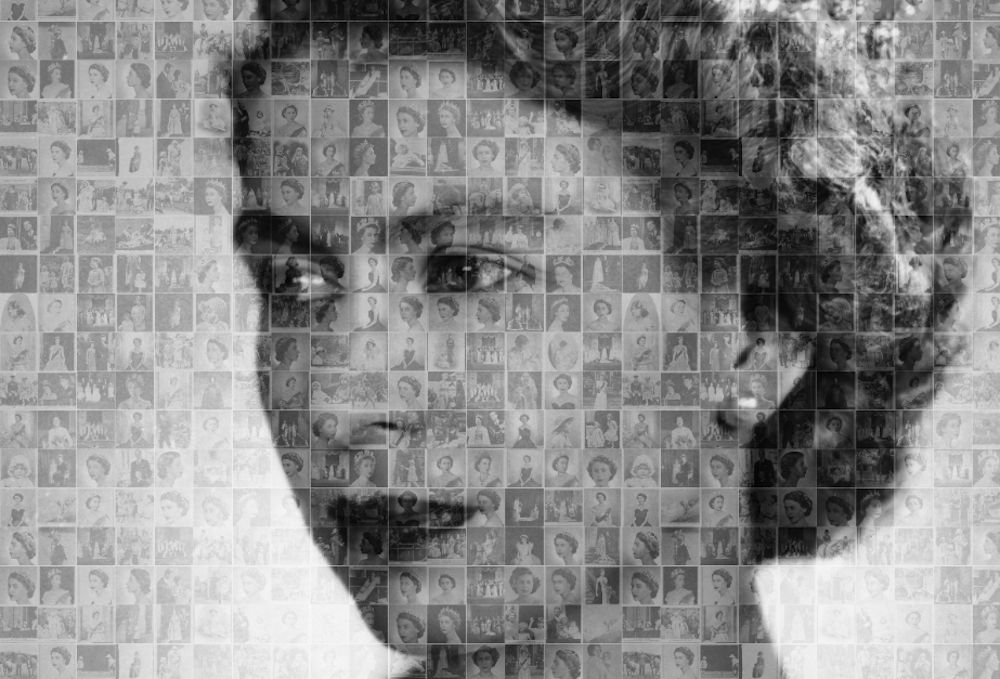 To mark Her Majesty The Queen’s Platinum Jubilee the National Portrait Gallery (NPG) has launched a new online digital display, which includes a collage that recreates Dorothy Wilding’s famous 1952 portrait photograph of The Queen.

The illustration of Dorothy Wilding’s portrait Queen Elizabeth II (1952) – taken on 26 February 1952, just 20 days after she ascended to the throne – uses a photomontage of 207 individual portraits.

Those 207 portraits include many by Dorothy Wilding as well as photographic images shot by the likes of Tim Graham, William Horton, Frederick Thurston and many by unknown photographers. It also includes some paintings and illustrations.

In February 2022 the Royal Family’s official Twitter account released a previously unseen Wilding portrait of The Queen from the photographic session held on 26 February 1952.

Wilding’s portraits of the Queen are arguably best known as being the design basis for GB definitive stamps from 1952 to 1967.

The NPG’s Collection includes over a thousand portraits of the Queen, and the new digital display will allow online visitors to explore a selection of those works, as well as an animated timeline of her reign.

From the earliest of images depicting the Princess Elizabeth’s ‘Merry Smile’, to the official photographs taken throughout her reign by the likes of Dorothy Wilding, Tim Graham and William Horton, this online display ‘gives visitors the chance to explore some of the most iconic portraits of the Queen, while learning more about the artists who captured them.’

Horton’s photograph of the Queen, taken in 1945 at the Auxiliary Territorial Service Training Centre in Camberley, sits alongside an earlier photograph, depicting the Queen and Princess Margaret as children, with broadcasting microphones at Windsor Castle, on 13 October 1940, carrying out wartime public duties.

Dr. Nicholas Cullinan, director of the National Portrait Gallery, said, ‘The National Portrait Gallery is home to the largest collection of portraits in the world, and over a thousand of those depict Her Majesty The Queen – from the official images of Her Majesty dressed in robes of state to photographs of her at home with family they provide a unique insight into her historic reign. Our new online display showcases a selection of these fascinating portraits, and I am looking forward seeing the creative ways in which families interpret and recreate those in celebration of the Platinum Jubilee.’

The photographic aspect of the display will also include a special ‘Facebook Premiere’ event – Behind the lens: Cecil Beaton and the Queen – with curator Robin Muir, from 7.00-7.30pm (UK time) on 16 June 2022.

Muir will be sharing how photographer Cecil Beaton shaped the monarchy’s public image in the mid-20th century through his portraits of Queen Elizabeth II and the Royal Family.

To find out more go to the National Portrait Gallery Facebook page.

The NPG has also included many of the key photographic portraits of The Queen in a new book,  Elizabeth II: Princess, Queen, Icon (£14.95), that’s been published to commemorate the Platinum Jubilee. It includes a free print of a Dorothy Wilding photograph of The Queen.

The book reflects on the Queen’s life, presenting family photographs alongside important formal portraits to explore how, as her reign became record-breaking, she became an iconic figure in modern British culture and history.

The publication features works by key artists depicting the Queen from 1926 to the present day – these include Cecil Beaton, Dorothy Wilding, Patrick Lichfield, Andy Warhol, Annie Leibovitz and David Bailey.

The book has an introductory essay by writer, commentator and former editor-in-chief of British Vogue, Alexandra Shulman, which explores how the collected portraits depict the Queen throughout her life and reign.

The NPG, in London, is closed until 2023, while essential building works take place on the Inspiring People redevelopment project, which will transform the Gallery, including a complete refurbishment of the building and a new learning centre.

During the closure period, the NPG is continuing to share its Collection through its digital channels and a series of nationwide partnerships and collaborations.

The NPG’s online exhibition, related products and information about the Queen’s Platinum Jubilee can be accessed at NPG Jubilee.