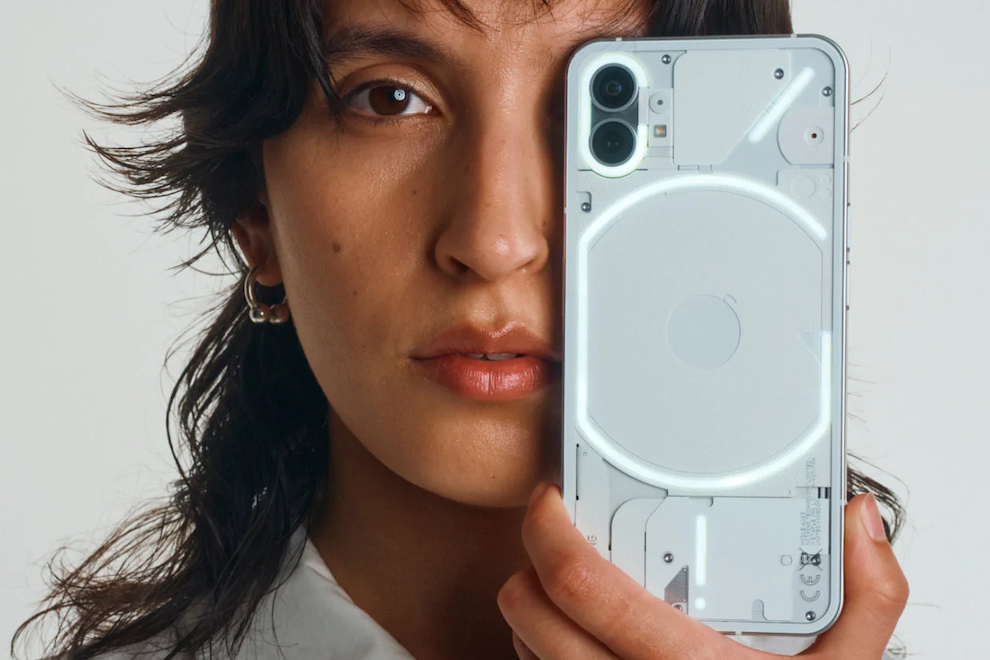 The UK tech firm Nothing has launched its first smartphone, the Nothing Phone (1), which includes two rear 50MP cameras and a front 16MP camera.

Nothing has said it wants to move away from the idea that more cameras on a smartphone mean better quality photos and videos, and so has opted for two 50MP rear cameras.

Those rear cameras are a 50MP with a Sony IMX766 sensor and a 50MP ultra-wide with a Samsung JN1 sensor.

The firm says the device also supports low-light photography in Night Mode and has a Scene Detection feature automatically tailoring camera settings to the environment the device is being used in.

The company also argues its Glyph Interface of LED lights on the back of the phone could be used as a portable ring light.

The white and black versions of the new Nothing Phone (1), which goes on sale from 21 July 2022

Nothing’s Phone (1) comes with a 6.55-inch OLED display that supports HDR10+ and a 120Hz refresh rate, which means smoother scrolling and gaming.

Nothing says the Phone (1) battery will last 18 hours or two days if left on standby and supports fast charging – reaching 50% power in 30 minutes or zero charge to full power in two hours.

The device supports wireless charging and reverse charging, meaning it can charge accessories such as the Nothing’s ear (1) earphones.

The phone will officially go on sale from 21 July 2022, but can be pre-ordered online.

Prior to that it can be bought from the Nothing Kiosk in Covent Garden, London, from 10am BST on 16 July up till 20 July.

Nothing was founded by Swedish entrepreneur Carl Pei in January 2021.

Pei was previously co-founder of the Chinese smartphone maker OnePlus in 2013.

Pei commented, ‘For years now, it felt like all the artists had left the industry. All we’re left with are cold, unexciting and derivative products. It was time for a fresh take. Phone (1) was designed out of instinct, making a product for ourselves and, more importantly, [one] that we would be proud to share with our loved ones. [We] can’t wait for people to start experiencing it.’

Prior to the launch of the Phone (1) Nothing has previously only launched one device so far, the Nothing ear (1) buds, which launched in July 2021.

After launching the buds in white, the company rolled out a black version of the same buds later in 2021.

To find out more go to Nothing.

How to take great macro photos on a smartphone