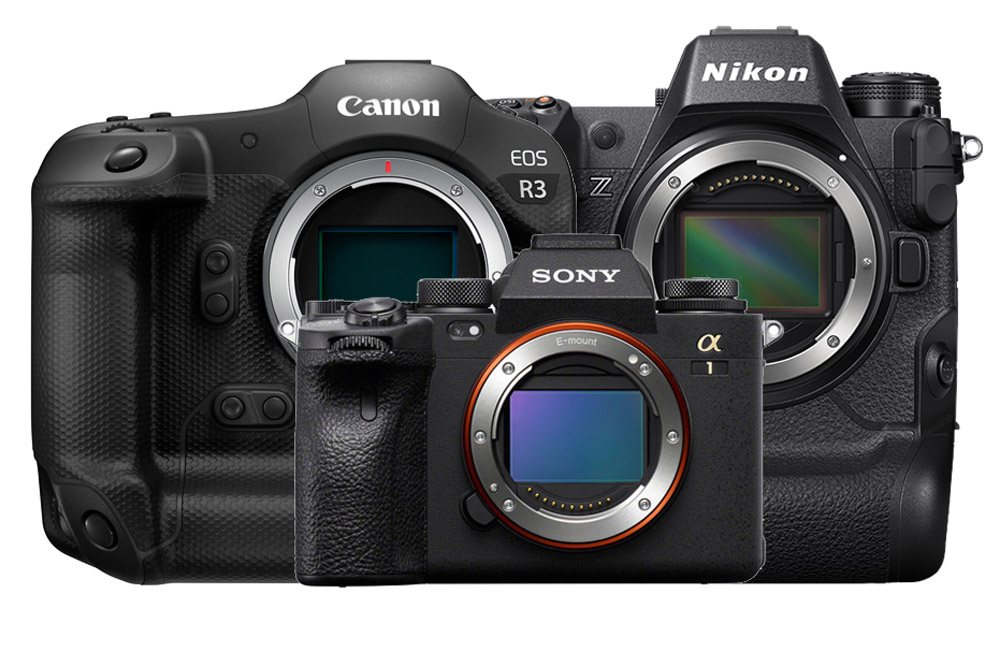 There’s plenty of hype around the Nikon Z9, with those eager to read our Nikon Z9 hands-on review, and there are also plenty of people who have already placed their pre-orders! It’s clear that Nikon are onto a winner with the Nikon Z9, but where does it stand in comparison to the competition, notably the high-speed Canon EOS R3 and Sony Alpha 1.

All three are top of the range mirrorless cameras from Canon, Sony and Nikon, and command premium prices. But what are the main differences, and how do they compare to each other. Find out here in our Nikon Z9 vs Canon EOS R3 vs Sony Alpha 1 comparison!

These are the RRP prices, and it’s quite clear that although all three cameras can easily be considered expensive, there’s also a big difference in price, with the Nikon Z9 (the lowest price here) being £1200 cheaper than the Sony Alpha 1.

As a comparison, the Canon EOS-1D X Mark III is £6999, and the Nikon D6 is £6299, making the R3 and Z9 appear to be good value for money in comparison. Sony don’t have a DSLR “alternative”, but the other high-speed model from Sony, the A9 II is priced at £4199, making the Sony Alpha 1 appear expensive in this line-up.

All three cameras offer up to 30fps continuous shooting, with the only limitations being found in how many shots you can shoot, and on the Nikon Z9, you can only shoot at 30fps when shooting JPEG only. If you switch to raw then the speed drops to 20fps. However, the 1000 frame buffer on the Nikon Z9 is impressive letting you shoot more than the other cameras.

This shutter shield protects the sensor when the camera is switched off, and despite appearances, it’s not a mechanical shutter on the Z9.

The Nikon Z9 shutter is entirely electronic, with a “shutter shield” to protect the sensor when the camera is off or a lens is not present. The EOS R3 and Alpha 1 both give you the choice of a mechanical or electronic shutter, with shutter speeds above 1/8,000s using the electronic shutter. The Canon EOS R3 has the fastest shutter speed available, at 1/64,000s.

The highest ISO speed available is from the Canon EOS R3, and whilst it’s unlikely that you’re going to want to use the highest ISO speeds on these cameras, it does give you an idea of the usable ISO range. From this, it’s likely that you’ll be able to use a 1-stop higher ISO speed with the Canon EOS R3 when compared to the others, however, we’ll have to wait till we’ve reviewed the camera to confirm this.

The lowest ISO speed available is found on the Z9, and whilst we wouldn’t expect there to be a massive amount of difference between ISO50 and ISO32 on these cameras, the slightly lower ISO speed will allow for slightly improved flexibility.

The Nikon Z9 will feel familiar to Nikon users

If you need to shoot vehicles, then you’re out of luck with the Sony Alpha 1. Whilst you can still shoot vehicles with AF-tracking, it doesn’t have a specific AF mode dedicated to it like the other cameras.

Another camera to support multiple subjects, is the 20MP Olympus OM-D E-M1X, which supports detection for vehicles (including trains, planes and automobiles), and birds. It also supports face and eye detection AF.

The Z9 looks to offer the most advanced auto-detection of objects, however the Canon’s Eye-control AF is particularly impressive.

Nikon say the Z9 will continue recording for up to 2 hours without overheating. It’s worth noting that the Nikon Z9 does not support DCI/CINE aspect ratios, instead offering 16:9 aspect ratios for 8K and 4K. Perhaps a future firmware update will add this support, as they have said they will be adding raw video support in the future.

The Sony Alpha 1 also doesn’t offer CINE/DCI-4K as an option, instead offering 4K UHD. 8K video is also offered at 16:9 aspect ratio. Sony say the camera is designed to record continuously for more than 30 minutes.

The Canon EOS R3 does not offer 8K as the sensor simply does not have the resolution to support it, and for better video specifications from a Canon, you’d be better off looking at the Canon EOS R5, which has 8K video recording. The EOS R3 does offer DCI 17:9 aspect ratio video at 6K/4K resolutions, as well as 6K raw 12bit.

You’ll find a top LCD panel on the EOS R3 and Nikon Z9, but not on the Alpha 1. The Sony Alpha 1 has the smallest body, and as you can see when looking at it, it also has the least function buttons, with the larger two cameras featuring front function buttons. For those that like the professional style body with integrated vertical grip, the Canon EOS R3 and Nikon Z9 are the ones to choose.

The R3 viewfinder is superb, while the fully articulated screen facilitates shooting at awkward angles

On a £6500 camera, the Sony Alpha 1 has by bar the most lacklustre screen, and you would expect a larger, higher-resolution screen, especially considering the price. The Canon EOS R3 has the most impressive screen here with the highest resolution, and it’s also fully articulated so you can tilt it forwards if you want. The Nikon Z9 has a 3-way tilting touchscreen.

Sony has decided to make up for the smaller screen, by including an extremely high-resolution electronic viewfinder (EVF), with an incredible 9.44m dot resolution, as well as the highest magnification at 0.9x. The Canon EOS R3 EVF has a high resolution with 5.76m dots, and 0.76x magnification. The Nikon Z9 EVF has a resolution of 3.69M dots, which is the lowest resolution here, but should still provide a good view of the scene, with a 0.8x magnification.

All cameras support CFexpress either type B or type A on the Sony, with the Canon and Sony cameras also supporting SD cards, which will be welcome for those that don’t like the high prices of CFexpress cards. However, if you are buying one of these cameras, then lookout for offers, as sometimes you can get a free memory card thrown in with the purchase.

The R3 connections, including Gigabit ethernet, are found under these covers on the side

All three cameras offer multiple connection options with high-speed Wi-Fi, Bluetooth 5.0, and Gigabit Ethernet (RJ45) connections letting you quickly transfer images when needed. There’s also FTP support, which is essential for sports and news reporters needing to get images to news agencies as quickly as possible.

The Sony Alpha 1 offers the shortest battery life, but if you add the optional battery grip, the VG-C4EM, then this will improve matters. With room for two batteries, it effectively doubles the battery life, so you should be able to get roughly 860/1060 shots (EVF/LCD).

As a camera without an integrated vertical battery grip, the Sony Alpha 1 is clearly the smallest model here, and for those who want a smaller camera, then the Alpha 1 is definitely it.

Both the Canon EOS R3 and Nikon Z9 follow the “traditional” professional DSLR style design with integrated vertical grip, allowing for a larger battery to be included. The Nikon Z9 is the largest in size, but there’s not a huge difference between the Z9 and R3 in terms of the overall size.

As well as being the smallest, the A1 is also the lightest camera here, as expected. The weight difference is particularly noticeable when you look at the weight of the Nikon Z9, the heaviest of the three cameras. The Canon EOS R3 is just slightly over 1kg.

Technical specifications are only one part of the story, and it’s worth looking at what’s most important to you and what you value the most when choosing a camera.

Using the camera, how it feels in the hand, image quality, and the lenses available are also massively important factors when choosing a camera, so be sure to have a look at our features on these full-frame monsters: