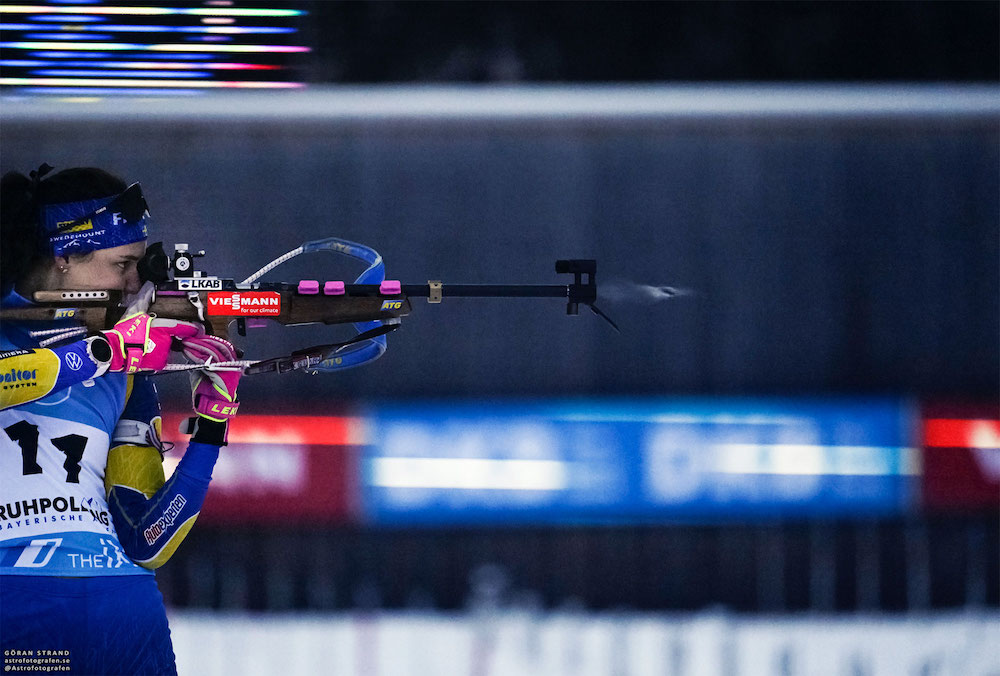 Swedish photographer Göran Strand was covering the Biathlon World Cup in Ruhpolding, Germany, last weekend and decided to test out the rapid shooting capabilities of the full-frame Nikon Z 9 mirrorless camera… he soon discovered the camera was capable of capturing a bullet in motion leaving a gun.

Strand was shooting the sixth stage of the Biathlon World Cup 2021-22 season and explained, ‘The past weekend I was down in Ruhpolding, Germany, to cover the Biathlon World Cup. This was my first sporting event working with my new Nikon Z 9 camera, so I finally got to test the camera in real action. The most exciting test was the one I did with the 120 frames per second mode. The Nikon Z 9 can shoot 11MP JPEG stills at 120fps, so I thought that maybe the Nikon Z 9 can catch a bullet as it leaves the rifle. The bullet from a Biathlon rifle has a speed of roughly 350m/s or [around] 1,235km/h (767mph), so it isn’t the easiest thing to photograph, but since the Nikon Z 9 can go all the way down in exposure time to 1/32,000 second I thought that it might work.’

A picture of biathlete Hanna Öberg, shot on the Nikon Z 9 at 1/32,000sec, showing a speeding bullet leaving her rifle Image: Göran Strand

He decided to photograph the Swedish athlete Hann Öberg whilst she was shooting. He revealed, ‘I did some tests and could see that it actually could be possible. First, I tried to get the rhythm of the athlete shooting since I didn’t want to hold the shutter release button down too long. At 120fps you get lots of photos to look for a bullet in! After a few tries I finally got the rhythm right and started to get bullet shots. Then I could start working on composition and getting a cleaner exposure.’

In the photograph (above) that Strand shot you can see the bullet just when it left the rifle. It was taken using the Nikon Z 9 and a FTZ-adapter with the Nikon AF-S 300mm f/4E PF ED VR lens. The exposure time was 1/32,000th of a second at ISO 8000 f/4. The second photo (below) was the frame taken after the ‘frozen bullet’ frame; whilst you can see smoke leaving the barrel of the rifle but the bullet has gone.

The following frame of biathlete Hanna Öberg, shot on the Nikon Z 9, shows that the speeding bullet had exited the frame. Image: Göran Strand

Strand added, ‘To sum things up, it quite amazing what cameras of today are capable of. Catching a bullet is quite an achievement and something you needed specialized high speed cameras to do not that long ago. Overall I’m super happy with the camera, the autofocus is just amazing when it comes to 3D tracking athletes. Also, the image quality is super great, even at higher ISOs. The 45MP resolution allowing you to really crop in close on the action if needed.’

Strand’s discovery of what the Z 9 is capable of capturing at high shutter speeds comes just two weeks after Nikon’s firmware update ver 1.10 brought the world’s longest continuous shooting to the Z 9 – it improved the duration for continuous shooting, letting you shoot up to 15 seconds, up from 3 seconds. Nikon says this is the world’s longest for a mirrorless camera with a resolution over 30MP (when shooting at 20fps).

The Nikon Z 9 currently features the world’s fastest image scan rate, minimising the problem of rolling shutter distortion and thus allowing Nikon to completely leave out the traditional mechanical shutter from the camera. The EXPEED 7 image processor in the Z 9 is said to be 10 times faster than that in the Nikon Z 7 II camera.

Göran Strand is a freelance photographer based out of Östersund, Sweden. He is known for his astrophotography but also shoots portrait, commercial, sports and events for domestic and international customers. In November 2016 five of his photographs of the Northern Lights were issued as stamps by the Swedish postal service PostNord. You can find more of his Strand’s work on his website and on his Instagram feed.

Göran Strand will also be running our Northern Lights in Abisko photo holiday, running from 10-13 March 2022.

Capture the Lapland night in pictures; a sky dotted with planets and galaxies, mountain birches in a beautiful landscape while the seductive aurora borealis dance takes place over our heads. You will experience this in the best place in the world for aurora borealis photography – Abisko National Park in the very north of Sweden.

You will learn how to capture the Northern Lights, the stars and the fantastic landscape around us at night. You will visit Aurora Sky Station which offers magnificent views of Torneträsk and Lapporten.