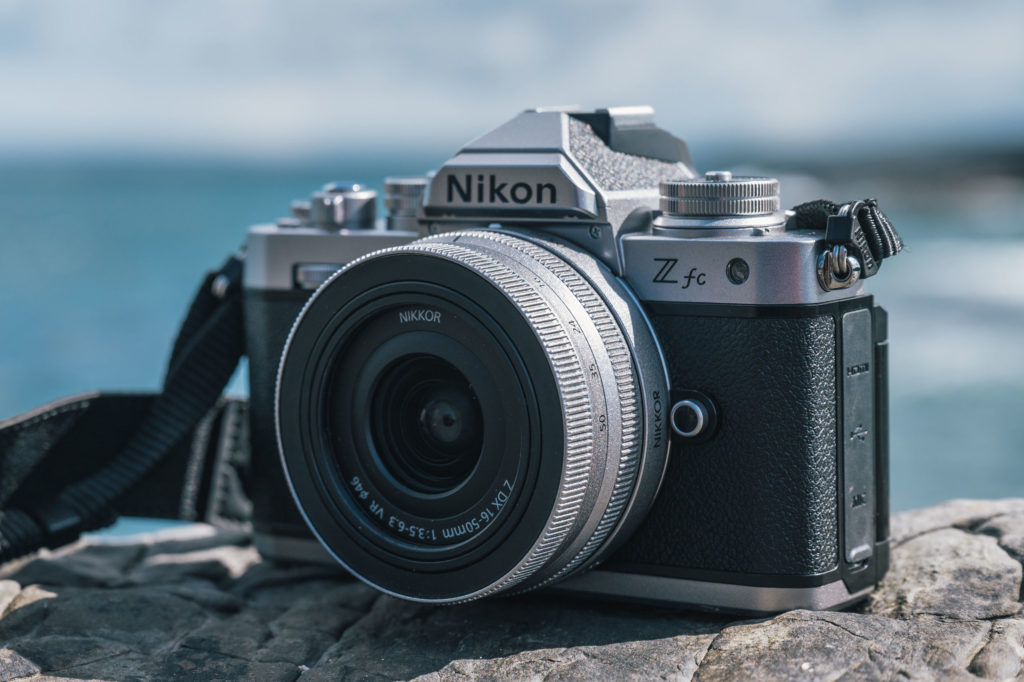 Nikon has launched a retro-inspired DX-format mirrorless camera, with the Z fc taking design cues from the legendary FM2 manual-focus 35mm film SLR. As such, it looks strikingly different to the current Z 50, with which it shares most of its components and specifications.

The two-tone silver body boasts top-plate dials for shutter speed, exposure compensation and ISO, with a small switch beneath the latter to select the exposure mode. The traditional controls don’t extend to aperture setting, though, which employs an electronic front dial, with the selected f-number displayed on a tiny LCD panel behind the shutter button.

The cosmetic makeover extends to the pentaprism-styled electronic viewfinder, which sports a 1980s-type Nikon logo rather than the current italicised version. As a result, the Z fc is by far the best-looking mirrorless model the firm has made to date. It’s also the first to feature a fully articulating touchscreen that enables high- and low-angle shooting in portrait format, while also facilitating vlogging.

Key specs are similar to the Z 50, with a few small improvements. The 20.9MP DX-format sensor offers a sensitivity range of ISO 100-51,200 that’s extendable up to ISO 204,800, while bursts can be fired off at 11 frames per second, or 5 fps with live view. Shutter speeds cover 30-1/4000 sec and can be set in whole-stop increments via the top dial, or one-third steps using the electronic rear dial if you need more precise control.

The articulated rear screen can be set to face almost any angle, which is useful for high or low-angle shooting

Meanwhile the autofocus system offers 209 selectable points, with eye detection and animal detection AF on hand for both stills and video shooting. 4K recording is available at 30fps using the full sensor width, along with Full HD at up to 120fps, and a 3.5mm stereo mic input is built in.

At 134.5 x 93.5 x 43.5 mm and 445g, the Z fc is similar in frontal area to both the Z 50 and the Fujifilm X-T4 that it strongly resembles, but is much slimmer due to the lack of any handgrip. We’ll have to wait and see exactly how that impacts on the handling, but it’s unlikely to be a good thing. Like its sister model, it lacks in-body image stabilization, relying on VR lenses instead, and makes no specific claims to with regards to weather sealing. The battery can be charged via the USB-C port, which can also be used to power the camera.

There’ll also be a £1,129 kit with the new Z 28mm f/2.8 SE (Special Edition) prime lens, which boasts complementary retro styling including a cosmetic silver ring around its barrel. This is a full-frame optic that will become available in its standard version later this year (and based on the premium it adds to the kit, we’d guess at a price of around £420).

Niokn has also confirmed that it’s developing the Nikkor Z DX 18-140mm f/3.5-6.3 VR travel zoom lens for its DX-format Z-mount cameras. It’s billed as compact and lightweight, including a plastic lens mount. The lens is scheduled for release later this year.

We’re sure many Nikon fans will be delighted by the Z fc’s design but perplexed by the fact that it isn’t full-frame. However, this has allowed the camera to be made as slimline as possible, in contrast to similarly styled but bulky Df full-frame DSLR from 2014, while also hitting a more accessible price point. The fact that Nikon has used the ‘fc’ name allows us to live in hope that a full-frame Z f will follow in due course.