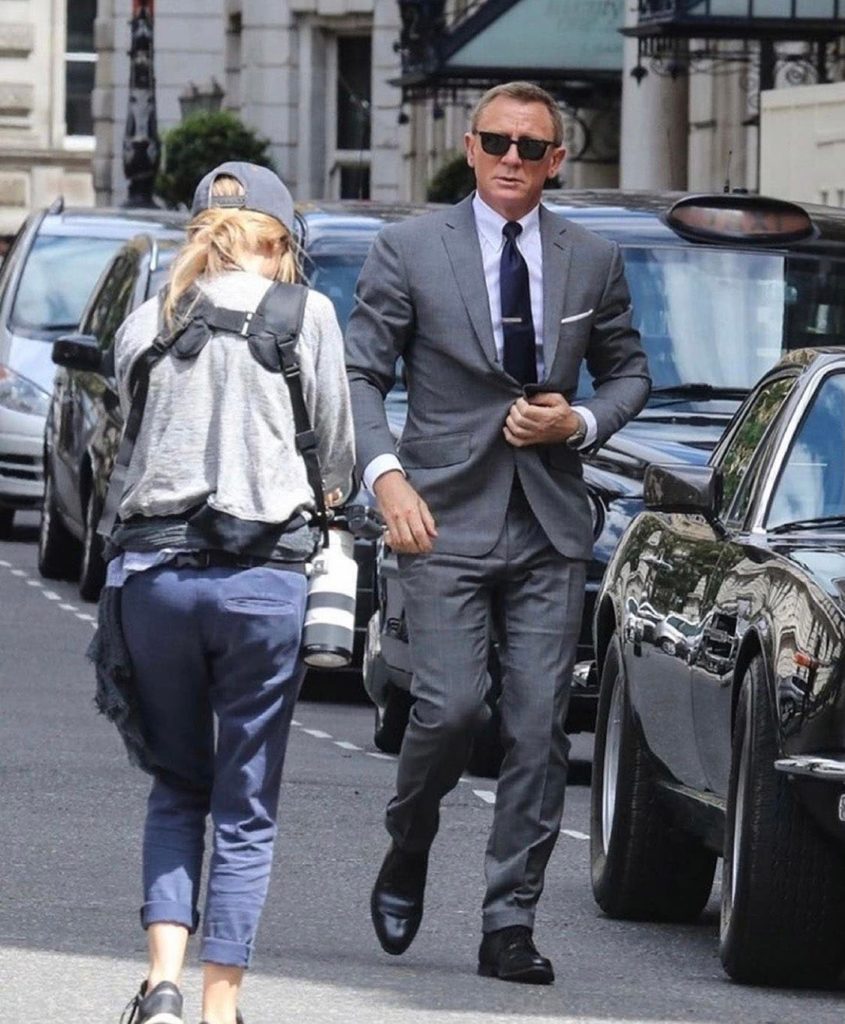 “I like to immerse myself in the story,” says long term movie stills photographer Nicola Dove, about her work on the sets of various films she’s worked on. While interviewing her, I realized that this kind of work is more complicated than it looks. In most scenarios, her stills are what make it to the promos and posters of major motion pictures in Hollywood. It’s not just about shadowing the cinematographer and trying to remain virtually invisible while snapping away with a camera, as you’ll read in this interview.

For over 20 years, my family has always seen 007 films in a cinema together. My dad and I consistently argue over who played James Bond the best. For him, it was Sir Sean Connery, and while I have no reservations about the legendary actor’s capabilities in this role, for me it’s Daniel Craig. He brought a much-needed refresh to the character’s outlook (Nicola agrees with me on this), and Casino Royale is one of my favorite Bond films. I haven’t yet seen No Time To Die, and I’m sure I will get emotional while watching Daniel Craig in his last outing. Nicola Dove, who was the on-set stills photographer for the film, gave me an in-depth look into how she shot for this movie.

It’s a lot harder than one would imagine being a photographer on a movie set. The images set the pace for the film in the various promotional posters and social media posts. It’s a skill she’s honed over a few decades of working closely in the industry with some of its biggest names. And she’s brought all that experience and expertise to the 25th Bond film as well.

On set you can’t use flash, and I find tripods unwieldy so I keep my gear very simple, as I like to be light on my feet, plus stay as unobtrusive as I can. The mirrorless camera’s have been a game changer for unit stills photographers, as we need to shoot silently so we don’t disrupt their sound recording.

The Phoblographer: Please tell us about yourself and how you got into photography, specifically stills photography for movies.

Nicola Dove: I studied photography in New Zealand (NZ) many years ago and fell in love with documentary photography. I loved that split second where all the elements come together in front of you, being in the right place at the right time. I shot editorial work in NZ and some charity work in various parts of the world before moving to London and meeting a film producer who introduced me to the idea of film stills photography. I worked on a number of short films for free before landing my first feature in 2002 called YES, by Sally Potter. I really enjoyed the teamwork, the energy of a film set, and I found that my documentary background, which included shooting weddings too, lent itself very well to shooting film stills where you have very little control over what is happening in front of you.

The Phoblographer: It must be a lot more convenient now with silent mode electronic shutters. What sort of equipment did you use in the part to keep your cameras quiet when you photographed a movie scene being filmed?

Nicola Dove: It is indeed! In the past, we had to shoot with the camera inside in a blimp – a housing box that muffled the sound of the shutter. They were big and heavy and very limited in what settings you could change without opening the whole thing up. But it was just how it was, and you get used to it. I don’t miss the blimp, though!

“I also have my trusty Nikon D3s plus a whole set of fixed lenses as a back up.”

The Phoblographer: A lot of the images you take are for BTS shots, promotional material and advertising etc. But have any of your on set images made it into the final cut of a movie? Which ones have been the most memorable ones of these?

Nicola Dove: Occasionally you’ll be asked to shoot a prop photo for the art department. Something like a family shot, or perhaps for a poster that appears in the movie. Shooting portraits of the whole Murder On The Orient Express cast for their period passport photos was a fun one!

The Phoblographer: You probably don’t just shoot over the main cinematographer’s shoulder, but you’ve also got to stay almost invisible while you move around during a take. This must be a whole different level of challenge in photography.

Nicola Dove: Being a film stills photographer is about bringing your own eye to the story. Sometimes the best place to be is next to the camera; other times, it’s about finding something quite different to what they’re shooting. In terms of movement, it depends on the scene. If it’s a conversation happening inside, for example, ideally, you are not moving around too much during a take because that would be far too distracting. But if it’s a walking scene often, you can walk next to the camera and shoot. I’ve gotten good at walking and shooting at the same time!

The Phoblographer: Working with familiar production crew is a relief for sure, but what are some things you do to familiarize yourself when you come to a whole new film set and production?

Nicola Dove: Find the tea table! Haha. It’s always great to catch up with familiar faces on a new film, and after many years there is usually one or two. Often producers will work with the same crew many times, so you make great friendships along the way. Prior to getting to set, I like to immerse myself in the story and will have read the script to have a good understanding of what the key moments might be.

The Phoblographer: What was the experience like shooting for a Bond film like No Time To Die? What were the more difficult shots to get during this time?

Nicola Dove: Shooting a Bond film was great fun; I loved every minute of it. On the one hand, it’s just like any other film – cameras, actors and equipment, but on the other hand, you know it’s a part of cinematic history.

One of the trickiest shots was of Bond on the yacht in Jamaica. I was on one of the various chase boats, so it was a matter of trusting the driver to get close enough, at the right angle, without getting in their shot.

Another was shooting in the forest with thick fog that they use to add atmosphere. It makes it very difficult to focus well on a moving target.

The Phoblographer: Daniel Craig’s final day on set must have been quite emotional. Did you photograph him while he was making his farewell speech, or did you enjoy the moment as an active participant of the movie?

Nicola Dove: It was an emotional moment for him and everyone on the film, particularly the producing team who have worked with him on the last five films. It felt like the end of an era. I took a few shots initially but then stopped to take it in and properly be there and enjoy it with the rest of the crew. Finishing a film is a mix of euphoria and relief, especially after a seven-month shoot. But I really missed it after we finished!

The Phoblographer: “Anything for the shot”  is a mantra you probably have to keep repeating. What are some of the extreme conditions or places you’ve endured to get a film still?

Nicola Dove: It usually revolves around temperatures, and you don’t even need to be somewhere exotic. Windy winter night shoots on the top of a building right by the Thames River in central London can be brutal. Otherwise, the heat – shooting inside a nightclub set in Jamaica was like a furnace because the air con had to stay off for sound. That’s part of the attraction of shooting film stills; you never know where the next job will take you.

The Phoblographer: I can’t imagine you having to ask the crew to repeat a scene because you missed a shot or got your settings wrong. Has this ever happened though? Or are actors happy to pose in character just to get a still after the take too?

Nicola Dove: Sometimes you need to ask an actor for a reset of part of the scene, but it’s not usually because of getting the settings wrong; it’s more because you can’t get the right angle you need during a take. Most actors are fine with it. You just need to know when is the right time and when not to. Over the years, you understand what images are worth pushing for and which aren’t because they wouldn’t get used anyway.

The Phoblographer: What’s the experience like to be around stars and celebrities for most of the year?

Nicola Dove: They just become a work colleague like everyone else. They’re all different and have their own patterns of working which you adapt to. Often you tend to forget they’re celebrities after a while, and it’s not so much of a big deal. I remember going to Italy on a film with Antonio Banderos; after shooting without much fanfare in London for a few months, he was suddenly mobbed everywhere we went. It came as a bit of a shock.

The Phoblographer: Finally, please tell us a bit about your Film Stills Academy. What are some of the things you teach which no other academy does?

Nicola Dove: The Film Stills Academy is my passion right now. I have developed a program where I teach photographers from around the world everything I have learned about film stills photography in the last twenty years, from different scenarios on set, equipment, fundamentals of a successful film still, delivery, how to get started, and the importance of story. Shooting on a film set is such a particular set of skills, and how to operate your camera well is only a part of it. Right now, I have students who are shooting their first features, or short films, or on high-end television. They are all at different stages, but I love supporting photographers who are motivated and chasing their goals.

All images by Nicola Dove. Used with permission. Take a look at her website and that of her Film Stills Academy to see more of what she does.