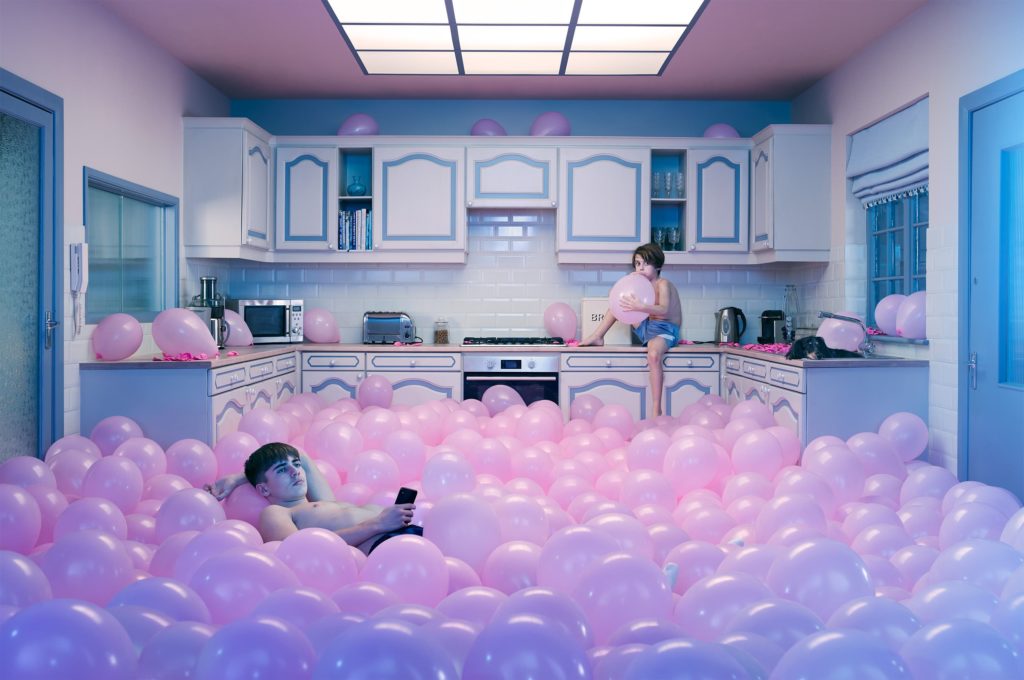 “During the pandemic, my eight-year-old son William was really struggling to sleep,” photographer Nicky Hamilton tells me. “He was filled with anxiety, thinking that the world was going to end. It was witnessing this that made me want to portray my family’s lockdown story.”

The result became The Upside Down, a surreal portrait of domestic life amid the pandemic. During those uncertain days, Hamilton and his family spent time in the studio, where he’d constructed detailed sets, including a make-believe bathroom and kitchen. William had questions about the future; Henry, his brother, missed his girlfriend, football, and school. They were scared and lonely, and they channeled their frustrations into telling a story together.

In the studio, the kitchen became a ball pit, meant to mimic the local play center where the family had spent their Saturdays pre-lockdown. The bathroom became a swimming pool, flooded with water and light. The magical, dreamlike world they created might have been fictional, but it echoed the reality of what was going on inside their heads.

Hamilton’s kids emerged from lockdown with memories unlike any experienced by their parents’ generation. They navigated pain, terror, and frustration, but they also found reason to hope. “After the initial onset of worry and fear, we knew we had to keep their spirits up, so it was constant reassurance from me and my wife,” the artist says. “We kept the news off the TV, and we celebrated with them that they didn’t have to go to school. We turned the period of lockdown into a fun and safe place for them to be in.”

We asked him more about the series.

The essential gear of Nicky Hamilton

Hamilton tells us, “I shot this project mainly on a Leica S3, which was on loan from Leica Germany, who was really interested in showcasing the project in their magazine. The lighting was a mixture of HMI’s, Kino Flo’s, Deo’s, and Source 4’s. I also had a very new and exciting Creamsource on loan too, which was great to play with. The lighting design was done by myself. I opted for a surreal color palette to promote an almost dreamlike quality to the concepts.”

Phoblographer: You became a photographer after a career as Head of Art at M&C Saatchi. What first drew you to set building and this labor-intensive approach to making pictures?

Nicky Hamilton: I wanted to create a tableau series of photographs based on my childhood called The Lonely Man. I was recreating memories and wanted everything to be perfect, so I decided that building sets for each of the pictures would be the best approach. During the three years it took to create the series, I fell in love with the process of creating a picture from scratch rather than finding one.

Phoblographer: What was going through your mind during the early days of lockdown, and in what ways, if any, do you think those feelings influenced your approach to this project?

Nicky Hamilton: Like most people, I was consumed with fear. The world I knew seemed to change overnight. It was a “lock-yourself-in-and-hope-the-storm-would-pass” moment. William not being able to sleep and having nightmares that the world was going to end and seeing the fear in his face is something that will stay with me for a long time.

Phoblographer: Your kids are eight and 14 years old–is that right? What was it like to work with them?

Nicky Hamilton: That’s correct. They’re both great to work with. Henry, 14, likes to strike a deal for time and payment and reminds me when that time is nearly up! My other son William, 8, is just brilliant. He offers up ideas and takes direction really well. It’s honestly a real pleasure to work with them both.

Phoblographer: You built this upside-down bathroom and kitchen yourself. Please tell us a bit about this massive undertaking. What steps were involved in the designing and building?

Nicky Hamilton: Fortunately, just before lockdown, my friend, who was renovating an old house, donated a vintage bathroom and kitchen which I had in the studio ready to use for a project, so the hard part of sourcing interesting props was taken care of. The set’s structure was fairly tricky, especially with the upside-down bathroom and glass tank on the ceiling for the window shot.

For this, I had to reinforce my studio ceiling, and via the welder next door, commissioned a custom-made glass tank in a steel frame, which was winched up to the ceiling void. All the sets had working hot and cold water, plus drainage, and these details were really important so my boys could be in the water and pose without shivering! Each set took around six weeks to build, including some time to pre-visualize the shots in 3D first.

Phoblographer: Any fun behind-the-scenes anecdotes that stand out in your memory?

Nicky Hamilton:  Flooding the studio from the shower shot was definitely an interesting memory. I’m now very proficient with a bucket and a mop.

Phoblographer: What do you think this unusual time has taught you?

Nicky Hamilton: Lockdown has taught me to slow down and appreciate the simple things in life.

Phoblographer: What do you think your kids will see when they look back on this time, and these images, as adults? What do you hope they remember most?

Nicky Hamilton: I hope they look back and connect with the mental health aspect within the work and carry with them the understanding of the importance of sharing their emotions and talking about their feelings.

Phoblographer: Was creating the images healing in any way, either for you personally or for your family?

Nicky Hamilton: It was a great distraction and a really nice way to break up the days and to spend time with the kids outside of being locked in the house. Spending that much time together and taking away outside distractions really made us bond together as a family. It was a worrying time but also a magical one for families to come together as a tribe.”