Nick Ut: 50 years on – the story of the ‘Napalm Girl’ photo – Amateur Photographer 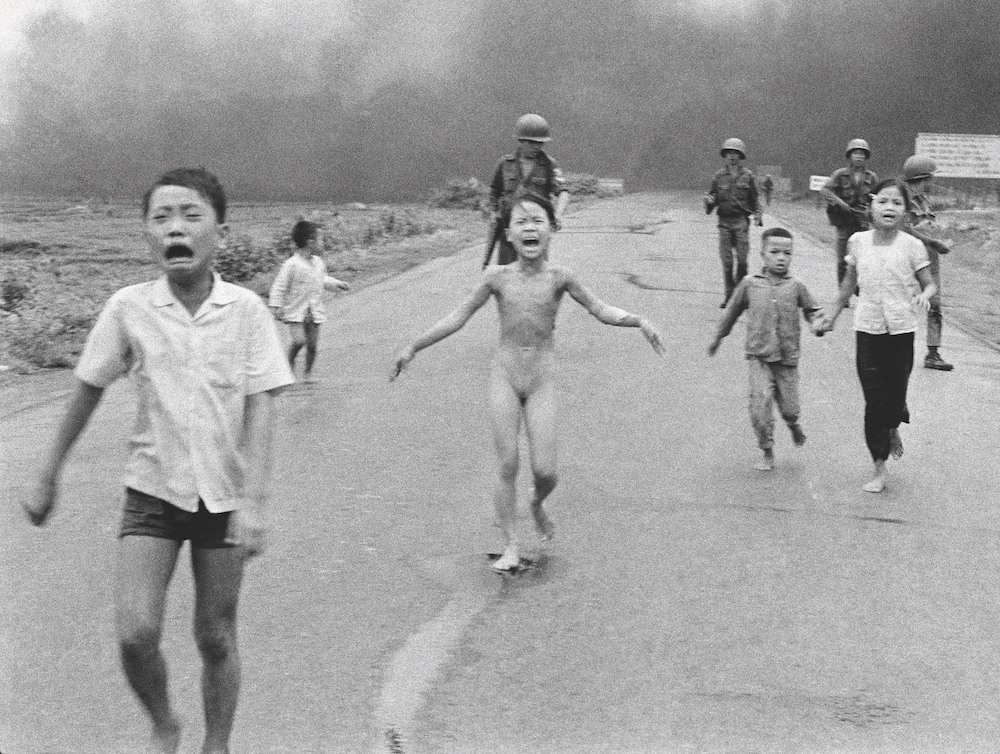 Nick Ut needs no introduction to anyone with an interest in documentary photography, or the often-traumatic history of the 20th century…

Even if his name is not as familiar as it used to be, his image of screaming Vietnamese children running from a napalm attack in 1972 can never be forgotten. Nor should it be.

Few photographs have helped to change history, but what became known as Napalm Girl – it was originally titled The Terror of War – definitely did.

While the Vietnam War had generated lots of shocking images before – including Eddie Adams’ shocking photograph of the summary execution of a Viet Cong suspect in downtown Saigon and images of the 1968 My Lai massacre – its publication finally exploded the ‘bright shining lie’ that the US had weighed in to somehow save the South Vietnamese population from communism.

How could the US claim it was saving anyone when its weaponry was being used to burn local kids alive? And Napalm Girl was the photograph to prove it.

Ut’s image soon became a touchstone for international outrage about the Vietnam War.

Nick Ut working as a war correspondent for Associated Press in 1972, aged 21

Among many prizes Ut’s iconic image won the Pulitzer Prize for Spot News Photography and the World Press Photo of the Year in 1973.

In fact, 1973 was the same year as the Paris Peace Accord was signed between the US, the US-backed South Vietnamese regime and the communist north.

Two years later the South Vietnamese government fell and the country was unified under communist rule.

Along with many other southern Vietnamese linked to the US-backed government or Western media organisations, Ut fled his home country in 1975 for a new life in the US as a photographer with The Associated Press.

Fast-forward well over 40 years later (to 2020), and in one of those wonderful coincidences that make travel so rewarding, I bumped into Nick Ut at the famous Thien Hau temple in central Saigon/Ho Chi Minh city.

He’d briefly stopped off in Vietnam on the way to Indonesia to give a talk for Leica, while I was there on holiday.

With his mop of silver-white hair, piercing eyes and pricey rangefinders, Ut was instantly recognisable, at least to this jet-lagged camera nerd.

Much to my delight, he agreed to chat, and even better, then spent a good 15 minutes taking pictures of my somewhat bemused girlfriend around the temple grounds.

His passion for photography is very much still there, as is the old determination and steeliness; I pitied the temple jobsworth who got a withering stare and what I assume was a pithy putdown in Vietnamese when he asked Ut to stop blocking a path.

This is a guy who’d probably been a permanent fixture on the Viet Cong’s hit list, so good luck to any bureaucrat who takes him on.

South Vietnamese forces follow behind terrified children, including 9-year-old Kim Phuc, centre, as they run down Route 1 near Trang Bang after an aerial napalm attack on suspected Viet Cong hiding places. The Terror of War, aka Napalm Girl. © Nick Ut/AP/Shutterstock

Nick Ut was born Huynh Cong Ut in the Mekong Delta region in 1951, a couple of hours’ drive from Saigon.

In still heavily accented English, Ut explained, ‘My older brother was an AP photographer and he was my influence in wanting to become a photographer. Although he was killed while covering the war in 1965, I still wanted to become like him. It is through the grace of God that the editors at AP gave me a job as a 16-year-old, processing film and making prints. I learned from those editors and from looking at the images coming in from the war.’

Given the tragic loss of his elder brother, Ut admits it was very hard at first but, fortunately for the history of documentary photography, the Associated Press Bureau in Saigon recognised his talent.

Originally the top AP photographer and picture editor Horst Faas (who was photography director of AP’s Saigon Bureau) refused to take Nick Ut on, not wanting to have the blood of two brothers on his hands.

However, Horst Faas relented and a 16-year-old Nick Ut began working in the AP darkrooms.

Ut revealed, ‘It was something I had to do. I very much wanted to be like my brother. I wanted to continue his relentless work showing the atrocities of war.’

Eventually, Ut worked his way from the darkroom to the battlefield, surviving several injuries until that fateful day – 8 June 1972 – in the town of Trang Bang, just off Highway 1, around 30 miles outside of Saigon.

The area was full of insurgent Viet Cong guerrillas and North Vietnamese regulars, so the US-backed South Vietnamese forces dropped napalm on what they’d identified as groups of communist fighters.

Just another day in the Vietnam War, then, but tragically the spotters failed to realise that there were a number of refugees taking shelter in a nearby temple.

When the napalm hit, a group of local children were also caught up the strike.

Amidst the chaos and horror of this scene, Ut had the presence of mind to get the shot of a lifetime, but then, in an act of utter heroism, put his camera aside to help a nine-year-old girl, Kim Phúc, whose clothes had been burned off.

Ut recounted, ‘If I had not helped her, I believe she would died. Kim Phúc’s injuries were very severe, so I had to act quickly and decisively. I immediately took her to a hospital in nearby Cu Chi where they first refused to help her, but once I showed my press pass, they took care of her. We’ve been friends ever since.’

We mentioned AP’s Horst Faas, and how this great champion of conflict photography became instrumental in getting Ut’s image published across the world.

Ut noted, ‘As soon as I clicked the shutter, I knew I had something special. It took Horst Faas to fight for it to be published, but fight he did… and the rest is history.’

The first AP picture editor who had seen Ut’s developed image rejected it, fearing that Kim Phúc’s nudity meant it could never be published in the US.

Unbelievably, the image was almost binned, but Horst Faas, along with AP correspondent Peter Arnett, returned from lunch in the nick of time and realised they had something very special on their hands.

On their orders, it then went from Saigon to Tokyo to New York by radiophoto transmitter, and soon was horrifying the world, much to the discomfort of the US military and President Nixon’s administration.

Nixon even considered passing Ut’s picture off as fake news and is heard speculating on one of the fateful White House tapes that the photo was ‘fixed’.

Some kind of happy ending

Thankfully, the veracity of the image was proven, and even more thankfully, Kim Phúc (now known as Phan Thị Kim Phúc) survived her life-changing injuries and went on to be a UN Goodwill Ambassador.

Her brother, the sobbing boy to the left of the frame, also lived to tell the tale.

Ut continued covering the war until 1975, racking up yet another injury when he returned to Trang Bang to follow up on the Kim Phúc story.

Ut explained, ‘I have many photos of the war. They are all very sad because most show how people suffer during wars… but I’m proud of my entire body of work.’

Following a stint in Tokyo, Ut settled in the US where he continued to work for the AP agency on all manner of projects.

While some of them may have seemed a bit anticlimactic after his adventures in the Vietnam War, Ut is ever the practical professional. ‘I began doing every type of photography that journalism encompasses. News, sports, celebrities… Everything was very hard work but enjoyable.’

Ut retired from AP in 2017, after 51 years behind the lens, but keeps up an exhausting travel schedule as part of his promotional work with Leica. ‘I do get tired but I love it. It’s something I never want to stop doing. I enjoy sharing my work and my experiences.’

Before our conversation ended, Ut revealed much of the secret of his success: hard work.

While some cynics say he was just in the right place at the right time when it came to Napalm Girl, this totally fails to take into account his hard-won skill in getting exactly the right exposure, focusing and composition, in an unbelievably stressful situation.

And all this without superfast AF, high ISOs and so on.

Ut conceded, ‘It’s very difficult to be a documentary photographer these days because the competition is fierce. But always do your best even if it’s a small assignment. You will stand out when your work reflects the intensity and hard work you put in.’

With that, Nick Ut was off. He’s said in previous interviews how, despite all his success, photography still inspires him, being his ‘doctor and his medicine’. Long may he continue shooting.

The Napalm Girl image remains relevant 50 years to the day since it was shot, as proven by the fact that Nick Ut and Phan Thi Kim Phúc visited the Vatican on 11 May 2022 and presented a print of the photograph to Pope Francis.

In early 2022 Ut had an exhibition of his work in Milan, Italy, during which he asked to meet the Pope and gift him with a copy of The Terror of War.

The Vatican agreed and the Pope also invited Phúc, who came with her husband.

Pope Francis, like the rest of the world, knew the Napalm Girl photograph and also knew Phúc, having met her when she visited his native Argentina before he was Pope.

She did not remember that, until he addressed her in Spanish.

Phúc recalled, ‘He said, “I know you. Do you remember we met before in Buenos Aires?”‘

Finally she did remember. Phúc revealed, ‘I said, “May God bless you with good health for all you have done for peace”. He said, “Thank you.” And it was just such a happy moment because he remembered me.’

The gear that shot Napalm Girl

Like many of his fellow photographers at the time, he hauled around a brace of Nikon and Leica camera bodies and prime lenses to cover a range of shooting situations in combat zones, from 20mm to 300mm. Inside the Leica was Kodak Tri-X film.

Ut’s Leica M2 camera is now part of the collection of the Newseum, which is currently seeking a new home, in the USA.