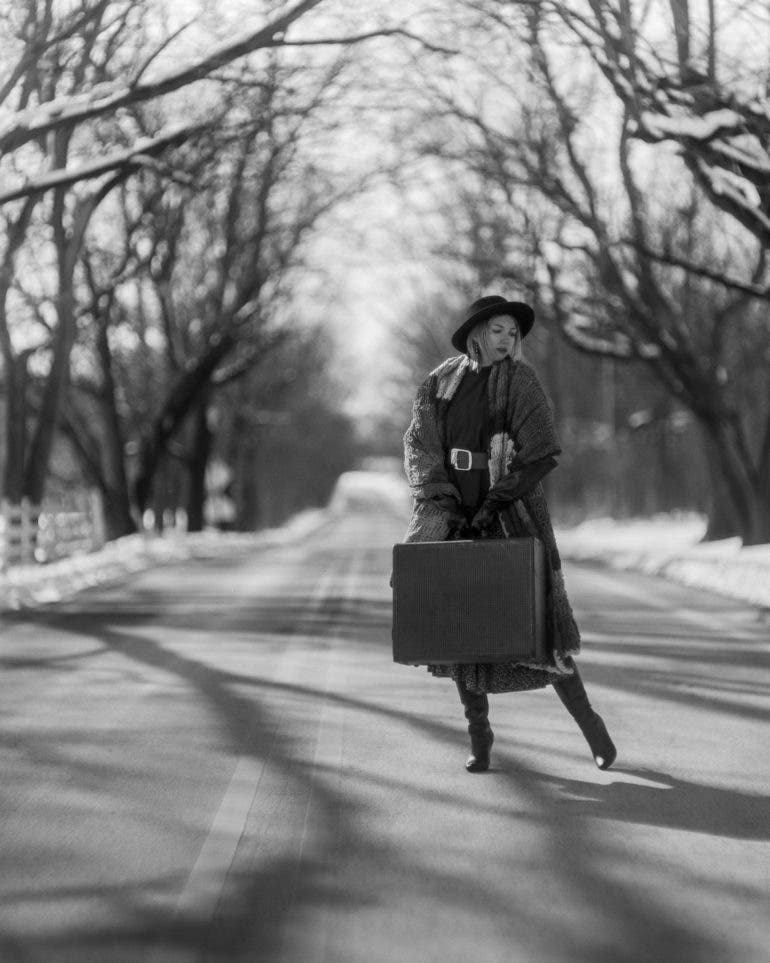 “It really isn’t a common choice but it is super fun to use,” Indiana-based photographer Nicholas Madrid says about his unconventional choice of large format cameras. Initially considered by him as nothing more than mantelpiece decorations, they soon became trusted companions. He tells us why he finds large format addictive despite the time it takes to achieve a perfect shot.

Probably the one section of analog photography I haven’t dabbled in yet is large format photography. Not so much because I find it cumbersome, but because I haven’t found a decently priced option to purchase here. In an era when digital cameras are getting smaller and more convenient to carry around, more and more photographers are going old school. It’s far from easy work, but they find the experience and results greatly rewarding. I suppose it’s like car enthusiasts opting to drive much older cars. A 2022 Mercedes Benz SL has the latest driving and entertainment tech, but there’s nostalgic comfort in driving the older R107 model. Nicholas agrees with me regarding how the creative process of large format photography often provides greater satisfaction than the results themselves. But when the end product works out in your favor, you know it’s something you need to keep doing.

“I usually have both cameras with me and feel they compliment each other well allowing me a lot of freedom when creating. One system gives me the ability to be very mobile on site with multiple film stock options. While the other allows for a look and feel that don’t think is easily produced in smaller formats.”

The Phoblographer: Hi Nicholas. Please tell us about yourself and how you got into photography.

Nicholas Madrid: I was raised and currently reside in Crown Point, Indiana, which is in the northwest part of Indiana and about an hour from Chicago. I lived in Florida from 2007-2018, where I attended Ringling College of Art and Design and received a Bachelor of Fine Arts degree in Illustration.

I got into photography in 2017 after many years of only doing drawing, painting, and graphic design. At the time, I was becoming less fulfilled creatively with what I was doing, and someone I knew was taking a photography class. I thought it sounded fun to walk and mess around with a different medium and maybe learn how to use the old digital camera I had. I quickly became obsessed.

When I initially picked up a camera, I wasn’t doing any type of portrait work; I was mostly photographing landscapes and flowers. Eventually, someone I worked with walked around a county fair and took some photos. I loved it. Then a few weeks later, I went to my first portrait meetup in Chicago and realized portrait work was all I really wanted to do. For me, photography came along at the perfect time in my life and gave me a sense of satisfaction that drawing or painting never could.

The Phoblographer: Most people opt to carry light and go small. When and why did you decide to go the other way?

Nicholas Madrid: My dad had given me the Pentax in 2017, and for almost two years, it sat in my home as a decorative piece because I didn’t know film could still be purchased and never considered if the camera worked since he bought it in the early 2000s from a flea market. So to me, it was just a cool-looking camera that my dad gave me. By the end of 2019, I wanted something more than the Canon xs with adapted vintage lenses that I had been using, so I decided to buy a battery, a roll of Kodak Portra 400, and see if the camera worked. By New Year’s Eve, I had everything to develop my first roll of color film and spent the night developing and scanning random things I photographed from that roll. By February, I bought the 105mm, and I was using the 6×7 for portraits and metering with models over the next few months to get a better idea of metering, developing, and scanning. Within that time, I came across various large-format portraits that really blew my mind, and I became pretty obsessed with finding a 4×5 camera but didn’t want to spend a lot starting off because I didn’t know if it was something I really wanted to get into. In November of 2020, I found a great deal on a 1944 Anniversary Speed Graphic with a broken163mm Ilex Paragon f4.5 I have been addicted since. Seeing those 4×5 negatives come out of the tank is nothing short of amazing and just hard to give up for small and light.

The Phoblographer: Even among large format users, the 8″ Dallmeyer Pentac f4.5 isn’t a common choice? Tell us what characteristics and feels of the lens make you often reach it.

Nicholas Madrid: I agree, it really isn’t a common choice, but it is super fun to use. I sought out this lens initially due to the “glow” that is produced in the highlights when using it wide open. However, the glow can become a bit much in certain lighting situations, so it is a rarity that I use it at 2.9, but at f4.5, it is still nice and soft with a tiny bit of glow in the highlights.

The Phoblographer: Is the shallow depth of field addictive? It is harder to shoot with smaller sensor/format cameras? Does it hurt to shoot a great photo but later find out you didn’t nail the focus?

Nicholas Madrid: The shallow depth of field can definitely be hard to step away from, especially when I first started using the camera. Missing focus always hurts though. Even more, since I am usually working with someone else. That person took time out of their day to work with you, and you are both trying to be the best you can to get some cool art.

The Phoblographer: All the consumables that go with your (now 70+ year) old camera and the wear and tear must sometimes burn a hole in your pocket. Are the results emotionally rewarding enough to keep this going?

Nicholas Madrid: Absolutely! Luckily there are some really great online communities that are pretty knowledgeable with the camera and able to help out with the few issues and questions I have had. I’ve been doing some form of art though, since the mid-90s. Whether it was pastels in high school or canvas and oil paints in college, expensive consumables have always been part of the creative process, so don’t think too hard about the cost. For me, the reward will always be worth it.

The Phoblographer: With film getting more expensive and the amount of time it takes to shoot and process these frames, choosing your subjects and locations is probably very deliberate. What factors do you consider for these?

Nicholas Madrid: If I am able to, I will almost always go to a location where I am supposed to have a photo shoot a day or two prior and measure lighting, set up my cameras, take notes, make sketches, or anything else that might help. I usually will send thoughts about makeup, hair, and clothing in order to help us both create something that we are both happy with afterward.

The Phoblographer: I find this a really interesting combo;  where did you get the idea to try using a projector lens with a Pentax 6×7?

I was adapting lenses pretty early on with digital, but adapting projector lenses was due to watching a lot of the photographer Mathieu Stern’s YouTube channel. I found something usable at a local flea market, then went on- line to RafCamera, ordered a collar, focusing helicoid, and P67 mount to make everything work. Since it wasn’t meant as a photography lens, it doesn’t have any coatings and is prone to flaring pretty bad, which is why I use it on overcast days or lower light situations. It has created some of my favorite images, but I try to not rely on it for every frame because it can be very addicting.

The Phoblographer: Have you perfected your developing process with large format films, or do you learn more about it each time?

My process has evolved a bit over the last few years with black and white, but for now, I use the same few stocks, and development on them is pretty straightforward. However, I am starting to experiment a bit more with shooting directly to paper and also dry plates. Both of which I tray develop under a deep red safelight and are taking a bit of experimentation. I feel like each time, it is getting a little bit better to the results that I want. The learning process is probably the most fun for me.

“For metering, I use a Reveni Labs Light meter. It’s tiny, so use a lanyard with it and keep it around my neck most of the time. I also self develop using Cinestill Film’s CS41 color kit and for black and white, Kodak Hc-110. For scanning, I use an Epson V850 with Epson’s Fluid Mount Kit.”

The Phoblographer: Do color photos using this combination not appeal as much to you as black and whites?

I’ve used color a few times with it over the last year, and I’m just much happier with the look of black and white. However, my bag always has a film holder loaded with Portra 160 and 400 just in case I feel a photo really needs to be in color.

The Phoblographer: Taking photos with a large setup like this probably attracts a lot of attention. Have you come to consider it a good conversation starter?

Absolutely. Over the past year, I have had a lot of really great conversations with photographers, models, and random people walking by when I’m using the camera. Someone is always interested in how I got started with it, developing, looking at the ground glass, and sharing their experiences with old film cameras.

“The camera has a built in focal plane shutter allowing me to use lenses that dont have a shutter attached such as old barrel lenses.”

The Phoblographer: What would you say to those who claim black and white photos and/or conversions are an easy way to mask the artistic and technical flaws more evident in color frames?

I say that’s a valid claim. I mean, I know I’ve had times when I’ve just messed up development but liked the photo, and I shifted it to black and white. I have had discussions with people that have a problem with that, and that is fine. The only people that usually have an issue with that are other photographers, and I’m not making work for them anyways. Black and white just appeal to me so much more than color, so it’ll be the way I share my work most often.

All images by Nicholas Madrid. Used with permission. Visit his Instagram and Twitter pages to see more of his work.

Want to have your photos featured? Here’s how you can apply.