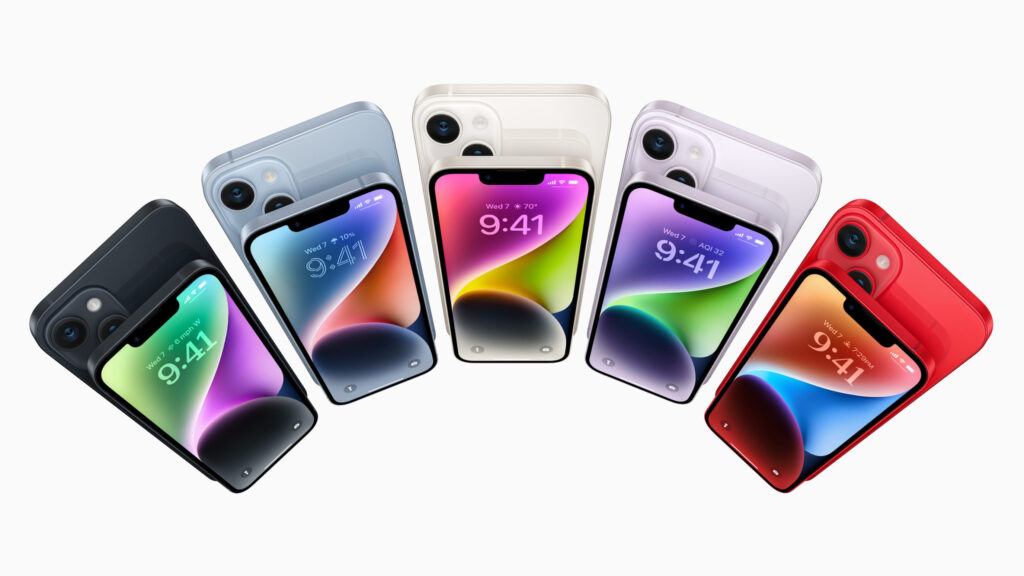 Apple has unveiled a slate of new products at its Cupertino headquarters, giving us a look at the updated camera tech of its iPhone 14 series.

This new handset is going to come in four variations – there’s the iPhone 14, the Plus, the Pro and the Pro Max. This means the iPhone Mini line has been officially phased out and the 6.1-inch iPhone 14 will be the smallest handset you can get.

The Plus is essentially just a version of the iPhone 14 for those who want a bigger (6.7-inch) display, while the Pro and Max are the more sophisticated handsets in the vein of the iPhone 13 Pro. So, what do photographers and videographers have to look forward to in this version?

The headline spec is that the camera on the 14 model has been updated with a larger 12MP sensor. Although in total, you actually have three cameras – the 12MP wide and ultra-wide on the rear, and the front-facing 12MP TrueDepth camera.

According to Apple, the rear cameras should perform up to 49% better in low light. This is due to a couple of key upgrades, namely an improved f/1.5 lens aperture, and larger pixels thanks to the aforementioned bigger sensor. It’s also expected to have an easier time taking images of moving subjects.

An image shot with the Ultra Wide camera on the iPhone 14, showing off the processing benefits of the Photonic Engine. Picture credit: Apple.

The TrueDepth front camera has had some upgrades. It is now equipped with autofocus, as well as a faster f/1.9 aperture. Apple also says it has introduced new tech for processing photos, which is dubbed the “Photonic Engine”. Shooters can also make use of a video stabilisation option called “Action Mode”.

The iPhone 14 Pro models have received a 48MP unit in their rear camera arrays, with sensor-shift optical image stabilisation and the ability to shoot in Pro Raw at full resolution. A 3x optical zoom lens now upgrades the telephoto camera, too. All models of the new iPhone also have access to the video-optimising Cinematic Mode, in 4K at 30 fps and 4K at 24 fps.

The larger Pro and Max models have generally received more non-photo upgrades. The most visually obvious is the removal of the infamous “notch” – a black divot in the top of the display – and its replacement with a pill-shaped cutout called “Dynamic Island”. This now houses the front camera and Face ID sensor.

Other new features across the range include crash detection. This can detect if the user has been in a car accident and automatically call for help. A new Emergency SOS feature is also on board. This is designed to help connect the user to emergency services via satellite in situations where cellular signal isn’t available.

The camera arrays of the iPhone 14 Pro and Pro Max. You can also see the Dynamic Island that replaces the notch.

The other significant change is the introduction of an always-on handset, which is bolstered by improved battery life.

Also announced at the Cupertino event were the new Apple Watch Series 8, with crash detection and body temperature sensors, the Apple Watch Ultra for extreme sports, and new AirPods Pro.

How to connect your camera to your smartphone

Capture amazing portraits on a smartphone