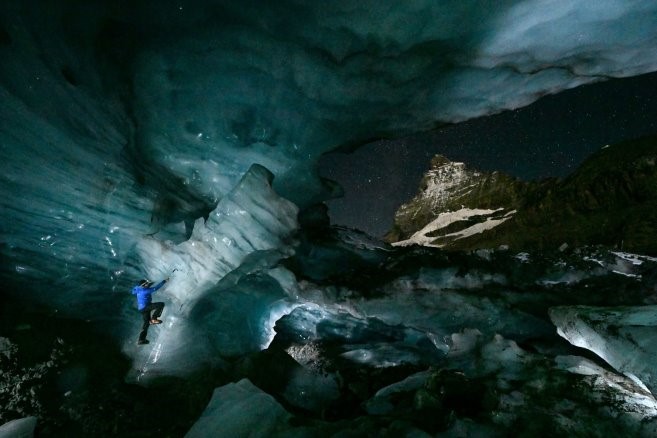 Thomas Peschak has spent much of his award-winning career documenting both the beauty and fragility of the world’s oceans. However, his latest project took him 3.000 metres above sea level to the Swiss alps. With his Nikon kit in hand, Thomas’s mission was to showcase the devastating speed at which the ice is melting and encourage people to think more deeply about the problem, through the power of imagery.

Over the last 100 years, glaciers have been losing ice at an unprecedented rate, with those in Switzerland losing a full two percent* of their volume in the last year alone. To demonstrate this, Thomas set out to recreate an image taken in 1959 of two geologists measuring the Gornergletscher glacier. After searching the mountains for hours, using the dramatic ridges to help him navigate, he located the exact rock the image was taken on 61 years ago, and was distressed by what he found. Less than half of the ice remained in the lower half of the glacier.

Thomas knew he needed to take images that would capture people’s interests, and hearts. “Although most people are aware of climate change, they’ve never actually seen it with their own eyes,” he notes. “It’s easy to get people to fall in love with images of cute animals, such as lions and dolphins, but for glaciers you need to take a photo that is so compelling, it forces people to care – because glaciers are now endangered too.”

With this in mind, he set up his shot to mirror the original photograph but felt that the image alone would not be powerful enough to tell the story he wanted. Thomas felt that having both the old picture and the new scene in one frame would better illustrate the major impact climate change was having on this landscape. Using his Nikon Z 9 and a slow shutter speed, he ‘collaborated’ with the wind, resulting in an image, which almost looks like, it is moving, much like the glacier itself.

The Z 9 proved to be the perfect tool for this shot. Having always shot on DSLRs, Thomas was initially nervous about switching to a mirrorless camera for this project. However, he now refers to the camera as a gamechanger. Describing it as “the best of a DSLR and the best of a mirrorless camera combined, this intuitive and robust camera is perfect for my style of photography. I am going to move to mirrorless…and I think it’s going to forever change how I make photographs.”

In addition to his ‘now and then’ shot, Thomas also wanted to take an image that inspired and excited people, and made them genuinely care about this glacier ecosystem. This ambition took him inside of the glacier itself, through one of its many magical caves, to showcase the physical beauty of the glacier. He searched and found a cave with a majestic opening, with the incredible Matterhorn centred in the middle of it, and knew this was the perfect spot.

Thomas waited until after midnight to take this shot (above), in a pitch-black cave in freezing temperatures, to avoid the constant melt water.

Thomas challenges himself to stick to strict photo journalistic standards and restrictions. This means, image editing like e.g. digitally combining several exposures is not an option. So here, inside the glacier he was posed with a challenging situation. Balancing shooting in a pitch-black cave, meant that the depth of field needed to be extremely wide to reach the climber, yet to also capture the moonlit Matterhorn featured in the background.

He also did not want to generate “star trails” by having a long exposure nor to rely on postproduction. By using an extremely high ISO for a camera with this mega-pixel count Thomas deliberately pushed the limits of the Z 9 to capture this fleeting moment, which resulted in a breath-taking memento as part of his larger portfolio on climate change. The image had a lot of moving parts, but the results were worth it.

“People have no idea of the scale of this place,” says Thomas, who chose for the climber to feature in this picture to highlight how small we are “compared to sheer grandeur and scale of the natural world.” He felt this was ironic, since “collectively, we have caused this gigantic glacier to recede and almost disappear”

He continues; “I think this image illustrates how beautiful, magnificent and iconic a glacier can be, and it will hopefully show people a glacier in a way they have never seen it before”.

With the help of the impressive Z9 camera, five different lights, a short shutter speed and a high ISO setting, Thomas took this incredible shot. For this project he used the Nikon Z9 Camera and Nikon Nikkor Z 14-24mm f/2.8.

Thomas continues to strive for change, using his imagery to show people just how vulnerable the environment is – from the deepest of oceans to the highest mountain peaks. In support of his work, Nikon has today released the short film, documenting Thomas’s project in the Swiss Alps. You can view the “The Glacier” video here: https://youtu.be/hlnP2W_9Trc

Documenting the consequences of climate change