Natalia Kovachevski Captures the Magic of the Female Gaze (NSFW) 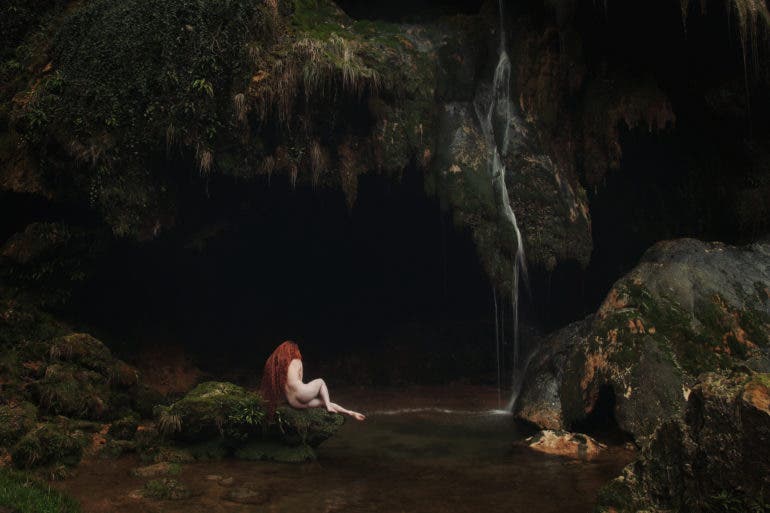 “My earliest memories of nature are of the sea,” the French artist Natalia Kovachevski tells me. “Growing up as a Mediterranean girl, I was convinced I was a mermaid and a witch–a wild woman, part-animal, with an affinity for the natural world.”

Now a photographer and model, Natalia continues to return to nature, exploring lush forests, hidden coves, and secluded waterfalls close to her home in the South of France. In many of her self-portraits, she embodies mythical characters: not only a witch and mermaid but also a kitsune, a divine fox from Japanese legend. In one portrait, she becomes la vouivre, or a guivre in English, a chimerical creature rumored to roam the French countryside during the medieval period, much like a dragon or serpent.

In Kovachevski’s work, the female body (and by extension, the landscapes she inhabits) becomes sacred domain. “I am a naturist, and I think that humans should remember that we are, first and foremost, natural creatures,” she says. “I will never forget what it feels like to be in communion with nature, to spend hours creating in the forest or by the water’s edge. We are a part of this ecosystem, and we can’t continue to destroy it.” We asked her more about her work.

The Essential Gear of Natalia Kovachevski

“For a long time, I only worked with a Canon 600D and 18-55mm lens. That’s it. I learned everything on my own as an autodidact, in a very intuitive way. Of course, I later tried another camera, the much better Canon 5D with a 24-105mm lens. But in the end, the technical differences do not matter much to me, as my art is more rooted in emotion than technicalities.

“I have a fairly artisanal and instinctive approach to photography. I try to get most of my effects straight out of the camera, and then I mainly focus on color grading in post-production. In terms of my self-portraits, in particular, I have a very experimental approach. I sometimes even work with a GoPro underwater. I have a tripod and remote control, but I prefer to use the self-timer. What I consider really essential to my practice is not being afraid to fail.”

Phoblographer: How did you get started as a photographer? Which came first: photography or modeling?

Natalia Kovachevski: I started as a model when I was eighteen years old, as a quest for identity. I was searching for a way to find myself, but I quickly realized that I would not be able to accept myself and my body through the eyes of others. That’s why I wanted to develop my own vision as an artist and photographer.

Phoblographer: Some of your images are inspired by folklore and mythology, such as Andromédē, the Greek heroine. Imbolc is a Gaelic traditional festival; Sappho was a lyric poet. Are there any specific traditions, tales, or legends that have helped shape your vision as an artist?

Natalia Kovachevski: There is no specific myth or story, but together, they all serve as a real inspiration. Folklore, tales, myths, and legends mean a lot to me because they reveal truths about humanity, using archetypes to tap into our collective unconscious. They are inexhaustible sources of inspiration to question and illustrate.

Phoblographer: Speaking of Andromédē, that photograph of yours reminds me of the famous Titian painting. Do you draw a lot of inspiration from art history as well?

Natalia Kovachevski: Several artists from different periods of art history inspire me, but I’m especially drawn to mythological scenes representing women. I question the ways in which women are depicted throughout art history. I am also passionate about discovering the visions of female artists–Angelica Kauffmann, Artemisia Gentileschi, Rosalba Carriera, and Sofonisba Anguissola among them.

Phoblographer: If we return to Sappho, the Greek poet, many see her as a feminist in a time long before feminism. Like her, you explore notions of femininity and power and call to mind the relatively new idea of the “female gaze.” In what ways, if any, do you see your work as challenging the traditional “male gaze”?

Natalia Kovachevski: Sappho is a huge source of inspiration to me, and I will also cite Renée Vivien (1877-1909), a British poet who wrote in French. Today, she’s sometimes called “Sappho 1900.” There are so many women artists and writers who have been made invisible by the “official” history books, although they were famous in their time.

Women have been portrayed by men for so long that the way men depict women has become accepted as the “neutral” perspective. It is as if women have never had possession of their own images. In this way, I think women artists have to continue to represent women’s bodies and reclaim female representation, and we often do it in a more humanistic way.

Phoblographer: Why are self-portraits important to your practice as an artist?

Natalia Kovachevski: I think, as a model and photographer, it is essential to remain aware of being on both sides of the camera. But there’s also real freedom in creating by myself. It’s a feeling of total independence and also a moment of introspection.

Phoblographer: How have your experiences as a model influenced your approach to photography?

Natalia Kovachevski: As a photographer, it’s so important to never put a model under pressure. I’d urge other photographers not to forget that the model can change his, her, or their mind–at any point in time. You have to create a safe space for your models and be mindful of their feelings. Consent and trust are non-negotiable.

Phoblographer: Your partner, Alisson Kubany, appears in some of these self-portraits. Is that right? How long have you been collaborating?

Natalia Kovachevski: Alisson has been my partner for four years now, and we have been collaborating since the beginning of our relationship. She does not assist me on every shoot, but she helps me often. I think that the artistic dimension was important in our relationship because real trust was required. Photography has helped us to build authentic confidence in each other without fear of judgment.

Phoblographer: What is your most powerful memory from your time making these images and exploring these landscapes, with Alisson or on your own?

Natalia Kovachevski: There are a lot of strong memories, so it is really hard to pick just one. But the time Alisson and I spent in Croatia discovering its fabulous landscapes is one of our best memories. I remember how enchanting it was to create together in all the different places we visited. I hope we will never stop traveling and creating together.

Phoblographer: Can you tell me about some of the beautiful landscapes in these pictures?

Natalia Kovachevski: There are many secret water sources near my home where I can return whenever I want. I also love hidden spaces in the forest, and I live right in front of the Îles d’Or or “Golden Islands” in the South of France, so nature is well-preserved here. I have some favorite places in the woods and by the sea.

I chose to live where I do because I need to be surrounded by the magic of the natural world. At the same time, I travel constantly, and I have found many bewitching places all other the world. I enjoy the sensation of being naked in remote, wild places. It’s a really symbolic and mystical feeling.