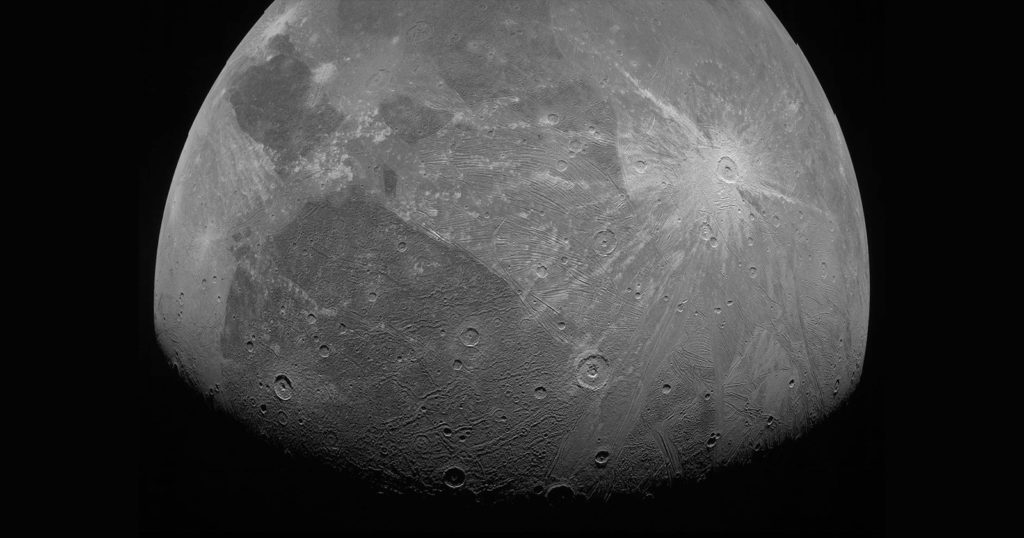 NASA has shared the first two images from Juno’s June 7th, 2021 flyby of Ganymede that shows dark and bright terrain and long structural features possibly linked to tectonic faults on the surface of Jupiter’s giant moon.

The images captured by Jupiter orbiter’s JunoCam imager and its Stellar Reference Unit star camera have captured images from “closer than any spacecraft has come to this mammoth moon in a generation” says Juno Principal Investigator Scott Bolton. “We are going to take our time before we draw any scientific conclusions, but until then we can simply marvel at this celestial wonder.”

Using its green filter, the JunoCam visible-light imager was able to capture nearly all of the entire side of the giant moon. Soon, the red and green filtered images will be available to the research team at which point they will be able to provide a color portrait of the water-ice-encrusted Ganymede.

In addition to the huge detailed image of the full side of the moon, the Stellar Reference Unit (a navigation camera that keeps the spacecraft on course) was able to capture a black and white image of the dark side of Ganymede using light reflected off of Jupiter.

“The conditions in which we collected the dark side image of Ganymede were ideal for a low-light camera like our Stellar Reference Unit,” said Heidi Becker, Juno’s radiation monitoring lead at JPL. “So this is a different part of the surface than seen by JunoCam in direct sunlight. It will be fun to see what the two teams can piece together.”

NASA hopes that this encounter with the moon will provide insights into its composition, magnetosphere, ionosphere, and ice shell while providing measurements on the radiation levels that will help future missions to the Jovian system.

With three giant blades stretching out some 66 feet (20 meters) from its cylindrical, six-sided body, NASA describes the Juno spacecraft as a dynamic engineering marvel, which spins to keep itself stable as it makes oval-shaped orbits around Jupiter.

The spacecraft will be sending more images from it’s flyby over the next few days with the RAW images being made available to the public here. The spacecraft’s path can also be followed here.