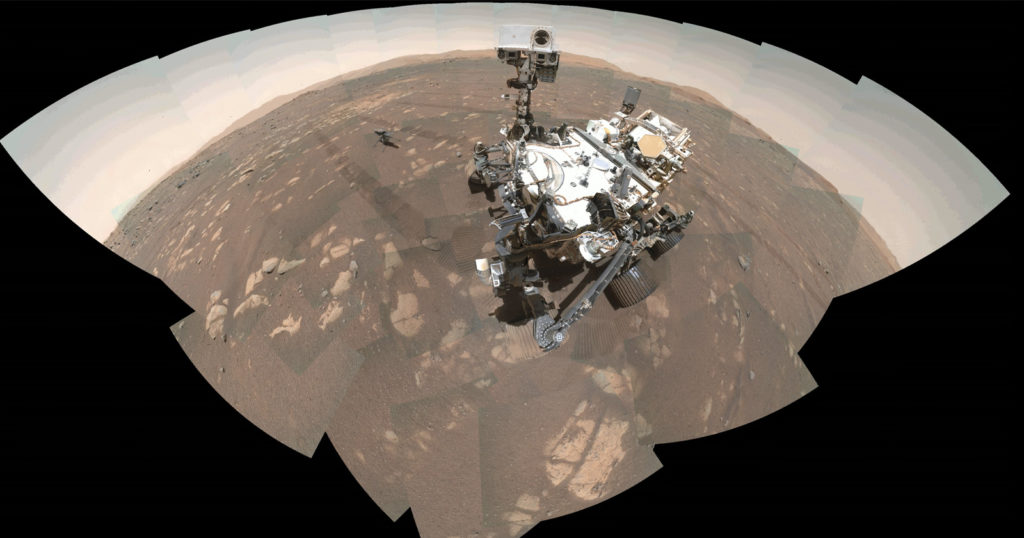 Back in April, the Mars Perseverance rover shared a selfie that included the Ingenuity helicopter drone on the surface of the Red Planet. The space agency has now shared a video and detailed explanation of how that photo was taken, including the fact it is made up of 62 individual images.

NASA explains that the point of the selfie isn’t just to show off to folks back on Earth and perhaps inspire new generations of space enthusiasts, but actually is a way for the engineers to check wear and tear on the rover.

In the video clip above, the results of Perseverance’s robotic arm can be seen as it maneuvered to take the 62 images that compose the finished image. What it doesn’t capture is how much work went into making this first selfie happen. In a separate video below, Vandi Verma, Perseverance’s Chief Engineer for Robotic Operations, explains.

“The way you and I might take a selfie is by holding a camera up with our arm and taking a single image,” she says. “The way the rover takes a selfie is a little more complex than that.”

The rover uses its’ WATSON (Wide Angle Topographic Sensor for Operations and eNgineering) camera that is positioned at the end of its robotic arm. The main purpose of this arm is to allow the rover to take close-up images of rocks for scientific analysis.

“Even with the arm fully extended, it can’t cover the entire rover in a single image,” Verma explains. “To capture the entire rover, we take multiple images and then stitch them together.”

The image below shows a computer simulation of NASA’s Perseverance Mars rover taking its first selfie. The point of view of the rover’s WATSON camera is included to show how each of the 62 images were taken. Those photos were later sent to Earth and stitched together into the selfie.

The team tries to hold the camera in the same position for each shot, and to do so it actually may mean that the arm has to move quite a lot.

“It can take up to an hour of arm motion and imaging to take that entire selfie,” Verma says. “The reason you don’t see the robotic arm in the selfie is that it is moving in between the different image frames that we are taking and we include enough overlap between the images so that when we stitch them together, we don’t have to include the arm.”

In the video clip above where Verma explains how the photo was taken, she also notes that for the first time, a Mars rover also has a microphone equipped, which allows them to share the sound of the rover moving its arm and taking each frame.

“The thing that took the most attention was getting Ingenuity into the right place in the selfie,” said Mike Ravine, Advanced Projects Manager at MSSS. “Given how small it is, I thought we did a pretty good job.”

Once the photos were compiled and sent back to Earth, image processing engineers began their work. They had to clean up any blemishes caused by dust that had settled on the camera, assemble the images into frames with a mosaic and smooth out their seams with software, and finally warp the crops so that it looks more like a normal camera that the public is used to seeing.

While a selfie on Earth is made by a single person, the Perseverance’s selfie took an entire team of people and almost an entire week.