NAB Show Has Been Cancelled (Again) Due to the Coronavirus Pandemic 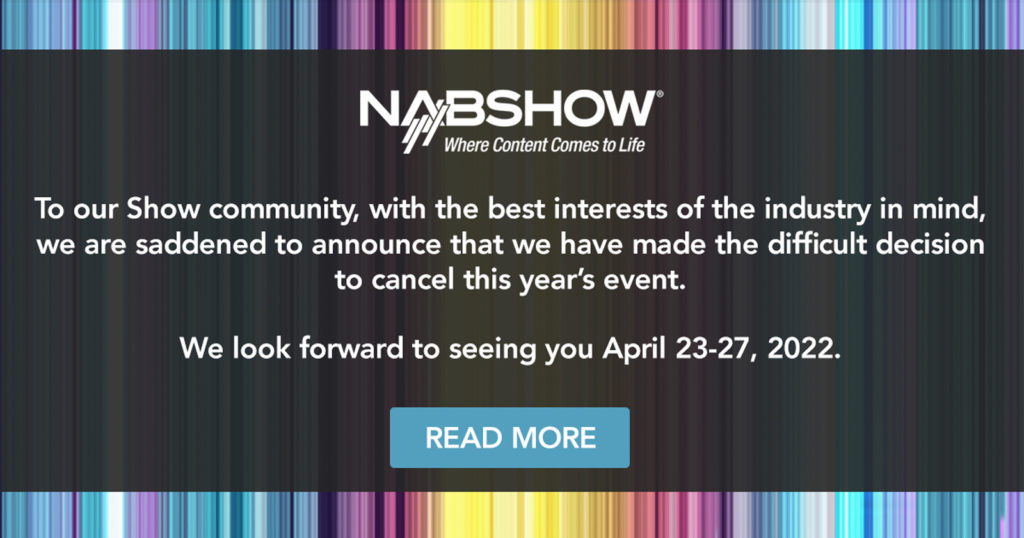 The National Association of Broadcasters (NAB) Show that was scheduled to take place in October has been canceled. This follows Sony, Canon, and Panasonic’s choice to pull out due to concerns over the coronavirus pandemic.

The status of the NAB Show looked shaky after the three tech juggernauts announced that plans to attend had been cancelled and it appears that it was enough water to break the dam. For the second year in a row, the NAB show will not take place in person. The event’s organizers made the public announcement on the NAB website:

For more than a year we have worked tirelessly to bring our industry together safely in Las Vegas at NAB Show. Unfortunately, the pandemic and surge of the Delta variant has presented unexpected and insurmountable challenges for our global community.

As we have always kept the best interest and safety of the industry as our priority, it has become apparent in the face of these challenges that we can no longer effectively host NAB Show or our co-located events, the Radio Show and Sales and Management Television Exchange, in person.

NAB Show is the premiere destination for the media and entertainment industry and we will not move forward with a show that delivers anything less than the excellence our community has come to expect and deserves from us.

While we are disappointed that we will not be together again in person next month, we look forward to converging in Las Vegas at the 2022 NAB Show, April 23-27, 2022, to reignite our passion for our business and focus on a bright future ahead.

The NAB Show joins PhotoPlus in major industry trade shows that have been canceled this fall as a result of concerns over the spread of the Delta variant of COVID-19. PhotoPlus organizers announced that the New York event would not take place as planned in an announcement from September 8.

The NAB Show’s cancelation is significant as it is considered one of two major shows in the imaging industry and immediately puts eyes on the state of the other: the Consumer Electronics Show (CES) which is scheduled to take place in January. Registration for press and industry partners opened yesterday. CES went with an all-digital show for 2021 and plans for a hybrid digital and in-person event in 2022. Proof of vaccination is required to attend and the event is closed to the public. At the time of publication, Canon, Nikon, Panasonic, Samsung, Qualcomm, Intel, and Sony were all listed as featured in-person exhibitors for the 2022 show.