Melissa O’Shaughnessy Brings Together The Wonderful Diversity of NYC 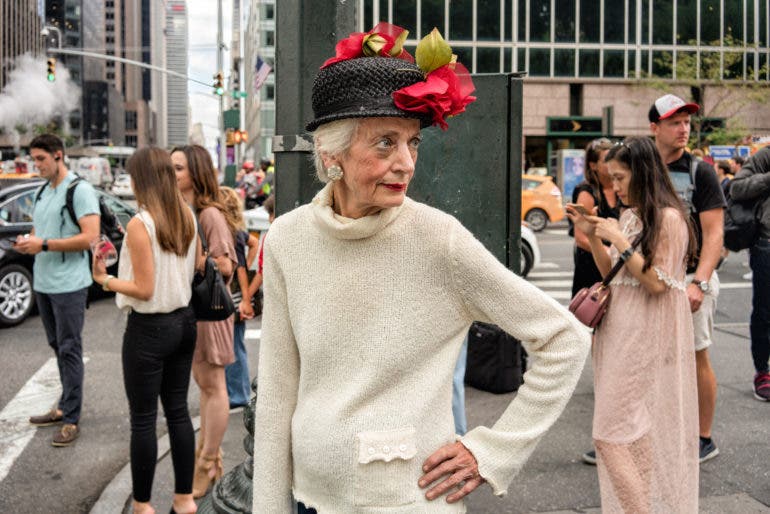 All images by Melissa O’Shaughnessy. Used with permission.

“That it was—and will be again—full of energy, diversity and truly quirky moments,” writes Melissa O’Shaughnessy. She adds, “It’s well worth paying attention to the variety and beauty of the millions of people who crowd its streets and avenues.” O’Shaughnessy is referring to New York City. It’s the place she calls home, and it’s also where she created her excellent photo book, Perfect Strangers.

New York is known for its diversity. With a variety of people, culture, food, and philosophy of life, the Big Apple is the perfect hunting ground for a street photographer.

For seven years, O’Shaughnessy observed all of the above. And with that, she turned everyday happenings into compelling images that tell a complex story.

The images in the book focus on the individual: A man living in his own thoughts, a woman on her way to work. But while each person is in their own unique world, O’Shaughnessy highlights how everyone is connected.

Perfect Strangers is the perfect portrait of New York. A city of individuals, from all corners of the world, coming together as one large, united group of New Yorkers.

We caught up with O’Shaughnessy to learn more about how the book came together and the story behind it.

Phoblographer: In your words, what is a perfect stranger?

Melissa O’Shaughnessy: I imagine the term “perfect stranger” means the same thing to me as it does to everyone else: a person that you’ve never met nor have any connection to. But as I was sifting through possible titles for the book, I liked the double meaning implied by the modifier “perfect”. All the people in the book were strangers to me, but I fell a little in love with every one of them—if only for a fraction of a second—when I took their photographs. They’re all perfect to me.

Phoblographer: What was it about this body of work that made you feel it was perfect for a photo book?

Melissa O’Shaughnessy: Though I photograph wherever I find myself, I spend most of my time in New York City, so that is where I do the bulk of my work. There are many New York street photography books, but relatively few of them are by women. I hope my book adds a new perspective to the genre.

Phoblographer: Through your observations, what did you learn about the mentality of the people who flood the streets of New York?

Melissa O’Shaughnessy: I’m a photographer, not a psychoanalyst, so I can’t say I’ve learned much of anything about the mentality of the people I photograph. My photographs surely say as much about me, or at least about the people and the moments I’m interested in, as they do about the people in them.

Phoblographer: Talk to us about the image placement in the book. How long did that take, and what was your creative thinking when putting it together?

Melissa O’Shaughnessy: The sequencing of the book went on for some time. Before approaching publishers, I had put together a maquette of my New York photographs, and when I signed on with Aperture we started all over again. From a pile of hundreds of photographs, my editor and I honed the sequence to tell a story about the city and its people: I wanted everyone who saw the book to feel like they had gone on a walk with me through Manhattan.

It was also important to me to make strong and confident women a recurrent motif in the book, along with families, twins, a few dogs and the occasional gust of wind to animate it all.

Phoblographer: The intro of the book is written by Joel Meyerowitz: what does that mean to you?

Melissa O’Shaughnessy: It means the world to me, of course. I am honored by Joel’s incisive introduction to my work. He started out as my teacher and mentor. Over the years he has become a true friend. The latter I value most of all.

Phoblographer: The work is a seven-year journey. How has your relationship with street photography evolved throughout that time?

Melissa O’Shaughnessy: I hope that I’ve become more observant and quicker to react as things unfold in front of me. Early on, I was often crippled by shyness when deciding whether to bring the camera to my eye. As time went on, I overcame my fears by realizing that I wanted the picture more than I feared the consequences of taking it. I’ve also become more interested in making photographs with greater complexity, in both subject and composition.

Phoblographer: Artists are often their own biggest critic: How do you feel about the book overall?

Melissa O’Shaughnessy: I often say that I carry around a bag of self-doubt—which is heavier some days than others—but I’m proud of the book. Had I known that the pandemic would draw a hard line between the time when I sequenced the book and now, I might have included a few more of my photographs that are thronged with crowds. As time goes by, I’m sure I will think of things that might have made the book stronger, but I hope the book will age well.

You can find more information about Melissa and her book Perfect Strangers by visiting her website.