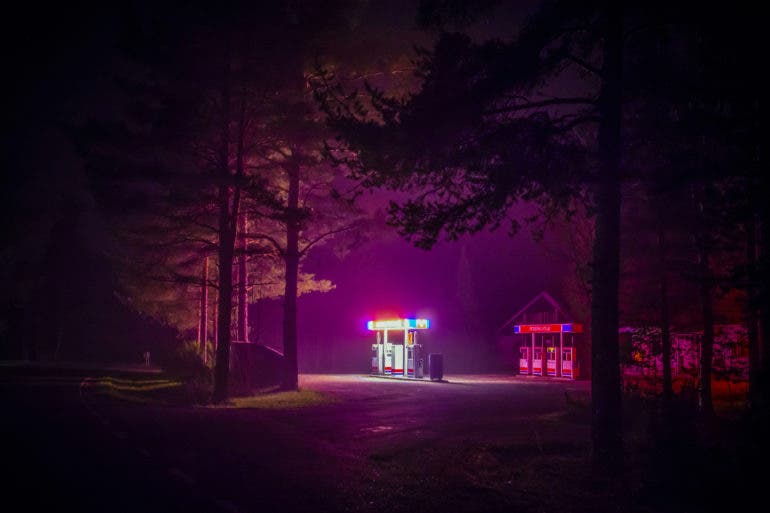 “I have a never ending fascination with light and the lack of it,” states Finnish photographer Maria Lax regarding the duality of light that shapes her multicolored photographs of the night. It’s an ongoing project, but Night Rising has nabbed her a 2021 Fujifilm GFX Challenge regional award. She spared some of her valuable time to chat with us about the ideas behind it and how living in the Arctic Circle for many years gave her a deeper appreciation of the dark.

For photographers like me who’ve grown up in metropolitan cities, seeing stars at night is a rarity. There are just two deep sky locations where I live and the best one is a three hour drive away. Sometimes I think it would be more exciting to take a trip to see the Northern Lights in Iceland or maybe some stargazing in Finland. Just last month I learned that the Central African Republic is one of the countries least affected by light pollution. That kind of darkness makes it apt for night sky photography. Maria Lax grew up in Finland and would have undoubtedly experienced some stunning visuals of constellations in the sky. But for her latest series, she opted to go a different route to capture the darkness among and around all of us. By adding a handful of vivid colors, Night Rising offers an alternative perspective of the world around us in the dark. And she hopes to continue this project for years to come.

The Phoblographer: Congratulations on the Fujifilm GFX Regional Grant Award Maria. Tell us a bit about yourself and how you got into photography.

Maria Lax: Thank you! I am originally from a small town in Northern Finland, right by the Arctic Circle – but have been based in London for the past 11 years now. I got into photography almost by accident. I have a degree in International Politics and Strategy with a focus on conflict management, and I always thought my career would be in the army. However, through many twists and turns, I ended up working in film, and eventually through that in photography.

The Phoblographer: Did the idea for Night Rising come from your experiences with long winter nights back home in Finland?

Maria Lax: The project started in Mexico in the summer of 2021, working in collaboration with my good friend Cecilia Gonzalez Barragan, who is a very talented lighting designer. We had conversations throughout lockdown and wanted to do something that is tied to the natural environment. I have a never ending fascination with light and the lack of it—how shapes and sounds become a mere suggestion at night, leaving our imagination to fill in the rest. In many ways, darkness gives us the freedom to explore the unknown. So yes, I do think growing up in the Arctic Circle where there’s a huge lack of light during winters has had an effect on me and why I love the darkness

The Phoblographer: We’re mostly accustomed to seeing nights in colours of black and dark blue. What gave you the idea to add some bright colours for this project?

Maria Lax: I’m glad you brought this up. For us, night is indeed often seen through blue hues. Where the bright colors and especially red and pink come in, is that the human eye is not actually that well-equipped to seeing red wavelengths, we much prefer cool tones and white light. But the downside of white light and blue is that it has a huge negative impact on wildlife and nature because it interferes with many signals of the natural world. So that knowledge together with reds and pinks being slightly more unusual to use at night, plus my love of those colors, were the reasons for opting for specific color schemes.

The Phoblographer: What were some of the locations that didn’t make it to the final list when choosing locations for this series, and why?

Maria Lax: This is an ongoing project that will hopefully span years, so I’m hoping to explore many different locations and the specifics in the future – nothing has been ruled out!

I work with anything and everything. My longest lasting workhorse camera has been the Canon 5D Mk3m with the 24-70mm 2.8 lens and I also own the Panasonic s1r. I love the Hasselblad H1, and most recently I’ve been carrying an Olympus XA with me everywhere I go.

The Phoblographer: Its quite a varied visual series. What emotions governed the choices for the subjects and framing?

Maria Lax: It’s mainly guided by curiosity: what feelings does the night bring out in us, and why? I love immersing myself in the darkness and letting my imagination run free – taking in the sounds and atmosphere of the location whilst being quite deprived of my sense of vision because of the lack of light can be an intense experience. Then I respond to that by starting to reimagine the locations by adding light and color to them.

The Phoblographer: The stories you listened to as a child, about the supernatural elements of nature: did they inspire the look and feel of Night Rising?

Maria Lax: I am always fascinated by the supernatural and our beliefs. I think what we believe in, what we love, and what we are afraid of can tell so much about us as people as well as the current climate. Think when times are challenging supernatural experiences become more common, and that’s something that is very interesting – and supernatural and spiritual experiences often being connected to nature, perhaps it’s part of our desire to be a part of something bigger. So absolutely all of that is an inspiration for Night Rising, too.

Because I worked in film and as a cinematographer, I can get techy about cameras but ultimately always say that whatever you hand me, I will make it work.

The Phoblographer: There’s a cinematic vibe to some of these shots. Any favorite films of yours that inspired the looks of some frames?

Maria Lax: I love Jurassic Park, Gattaca, Kurosawa as well as the Moomins. I’m hugely influenced by painters like Henri Rousseau, Tove Jansson, and Francis Bacon among others too – so rather than any specific films I think my work is a blend of all these elements together, and each project brings them out in different shapes and forms.

The Phoblographer: Quite the opposite from most of your commercial work, where you’re used to shooting with a lot of light. Does photographing the mystery of the dark offer a refreshing escape from every day life?

Maria Lax: Shooting at night is very meditative and transformative. I’m quite solitary and find nature very soothing, so it’s the perfect setting for me, and I just find it hugely inspiring. But that being said, I don’t like shooting in busy urban environments, I find it quite scary and unsettling. I like being in nature, and forests are my safe space.

Where I get super geeky is lighting – it’s my first love and my comfort zone. I love pushing the boundaries of what you can do with lighting and experiment with all kinds of different lights. I pretty much always use continuous lighting.

The Phoblographer: Even after thousands of years of evolution, darkness is something we can’t escape. Why would you say humans are still afraid of the dark?

Maria Lax: I believe that it’s because we feel vulnerable and small, and at night we realise that we are a tiny part of a bigger system that we don’t fully understand and we can’t control. Not being able to rely on our eyesight, and by losing the control we so much crave, I think we’re forced to turn inwards. Our own minds can be the scariest place of all, and I think that’s where the fear stems from.

All images by Maria Lax. Used with permission. Check out her website, Instagram, and Twitter pages to explore more of her work. You can also order her latest book.