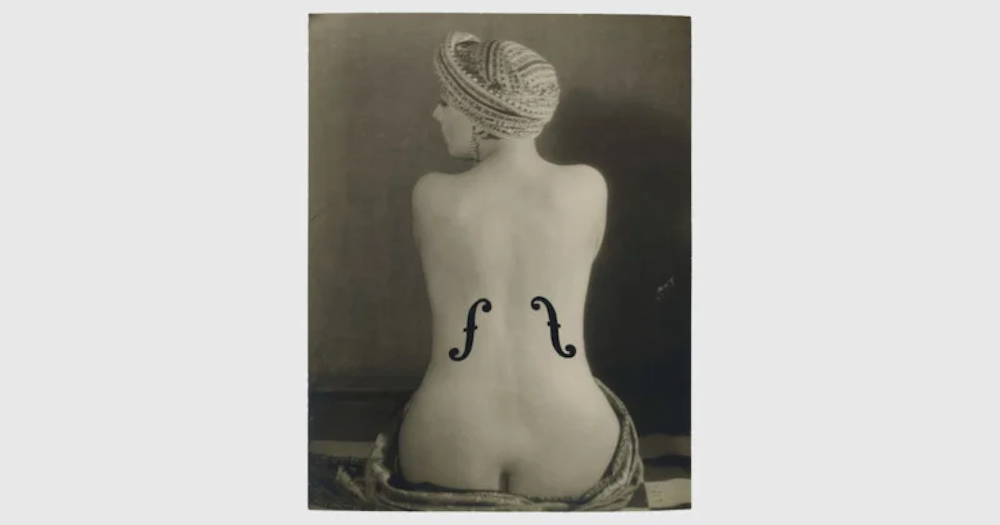 Photographer and artist Man Ray’s iconic surrealist photograph Le Violon d’Ingres (shown above) is likely to set a world record price for a single photograph at auction when it goes under the hammer at Christie’s New York in May 2022, thanks to a record pre-sale estimate of between $5million and $7million (US).

The Le Violon d’Ingres image depicts a nude woman with f-shaped violin markings on her back and, if it reaches its asking price or higher, it will instantly become the most expensive photo ever sold at auction. The current record auction price for a single photograph is held by Andreas Gursky’s Rhein II, which was sold by Christie’s for $4.34million in November 2011.

In 2014 the Australia-born photographer Peter Lik claimed he has sold a photograph, entitled Phantom, for $6.5million but that transaction has never been officially proven and a buyer has never come forward, so Gursky’s Rhein II currently remains the most expensive photo with an officially verified sale price.

May Ray’s 1924 masterpiece, widely considered to be his most famous work, is to be sold in May, alongside other photographs, artworks, jewellery and posters from a Surrealist collection compiled by Rosalind Gersten Jacobs (a retail executive and fashion buyer for Macy’s) and her husband Melvin Jacobs (who was chief executive of Saks Fifth Avenue).

Paintings by Man Ray previously have been auctioned off for up to $5.8million, but none of his photographs have ever sold for more than $3.13million. That £3.13million figure was paid at a Christie’s Paris auction in 2017 for Man Ray’s Noire et Blanche (1926). Man Ray’s Portrait of a Tearful Woman (1936) was sold for $2.17million by Christie’s New York in May 2017.

In 1962, Man Ray sold ‘Le Violon d’Ingres’ directly to the Jacobs, a married couple who befriended many famous surrealist artists – including Marcel Duchamp, René Magritte and Max Ernst – and purchased many of their important works.

Man Ray’s Le Violin d’Ingres is a print that’s considered by experts to be an original photographic copy, created around when Ray captured the photo negative. Both Rosalind and Melvin Jacobs have passed and their surrealist collection is being sold by their daughter, Peggy Jacobs Bader. In total the collection being sold in May 2022 could fetch more than $20million (US).

Peggy Jacobs Bader revealed, ‘The acquisition of nearly every piece has a unique and intimate story behind it. The joyful spirit of my parents’ relationship with the artists is reflected in the works they amassed. In viewing the collection, one gets a visceral sense of my parents’ love of Surrealism, their discerning eye for great art, their playfulness and, at times, their mischievousness.’

Darius Himes, international head of photographs at Christie’s, explained, ‘The reach and influence of the image, at once romantic, mysterious, roguish, and playful, has captured the minds of all for nearly 100 years. Le Violon d’Ingres 1924, by Man Ray of his lover Kiki de Montparnasse, is inarguably one of the most iconic works of the 20th century. This beguiling Surrealist image is the result of a unique and hand-manipulated darkroom process. As a photographic work, it is unprecedented in the marketplace. We are proud to handle it.’

Highlights from the Jacobs collection will tour to London, Paris and Hong Kong before returning to New York, where they will be on view at Christie’s Rockefeller Center galleries ahead of the sales in May.

The title of the Man Ray photograph is translated as ‘Ingres’ violin’, and it is a widely used French idiom that means ‘hobby’. It invokes the name of Jean-August Dominique Ingres, a 19th century artist, who wished to be best known for his violin playing, rather than his painting.

It was in Paris, in 1924, that Man Ray photographed his lover and companion, Alice Prin (aka Kiki de Montparnasse), who went on to become one of the most famous models of the 20th century. Inspired by the painting La Grande Baigneuse (aka The Bather of Valpinçon) by Jean Auguste Dominique Ingres, Ray painted violin sound holes on Prin’s back to transform her body into something akin to a musical string instrument.

In fact, the ‘f-holes’ weren’t painted onto Prin’s back in real life but, instead, they were painted onto a print of the photographic portrait that Ray had shot. He then rephotographed the classical nude portrait to create the finished surreal photographic artwork.

The black-and-white image depicts Alice Prin/Kiki de Montparnasse, with her naked back facing the camera, and her head, crowned with a turban, slightly turned to the left; her arms aren’t visible. Two f-shaped violin markings are cleverly positioned in the middle of the model’s back, giving her body the appearance of a string instrument.

Le Violon d’Ingres was first published in a special June 1924 issue of Littérature, a struggling surrealist magazine that was launched in 1919 and closed after the final issue, which Man Ray’s photo appeared in. In the 98 years since the publication of Le Violon d’Ingres the photograph has become one of the most recognisable works of surrealist art anywhere in the world.

The Getty Museum noted, ‘The transformation of Kiki’s body into a musical instrument with the crude addition of a few brushstrokes makes this a humorous image, but her armless form is also disturbing to contemplate. The title seems to suggest that, while playing the violin was Ingres’s hobby, toying with Kiki was a pastime of Man Ray. The picture maintains a tension between objectification and appreciation of the female form.’

The life of Man Ray

Man Ray was born in Philadelphia, Pennsylvania, 0n 27 August 1890 as Emmanuel Radnitzky, but became known in his adult and professional life as Man Ray. He was a pioneering US fashion and portrait photographer who created iconic nude and surreal photos while living in New York and Paris. He was also known for his cameraless photograms, which he famously dubbed ‘rayographs’.

Man Ray spent his early life in New York, turning down a scholarship to study architecture in order to devote himself to painting. In 1915, while at Ridgefield artist colony in New Jersey, he met the French artist Marcel Duchamp and together they tried to establish New York Dada.

He was self-taught in photography in order to reproduce his works of art, but in 1920 he began to work as a portrait photographer to fund his artwork. His friendship with Duchamp led to Man Ray’s move to Paris in 1921, where, as a contributor to the Dada and Surrealist movements, he revolved in the same circles as Pablo Picasso and Salvador Dali. He created memorable portrait photographs of many of his famous contemporaries, including Dali, Picasso, James Joyce and Jean Cocteau.

Shortly after arriving in Paris, he met and fell in love with Alice Pin (Kiki de Montparnasse), an artists’ model and celebrated character in Paris bohemian circles. Kiki was Man Ray’s companion for most of the 1920s. She became the subject of some of his most famous photographic images. In 1929, he began a love affair with the Surrealist photographer Lee Miller but she left him in 1932. Man Ray was in a relationship with the dancer and model Adrienne Fidelin from late 1934 until August 1940, the two parting ways after Man Ray fled the Nazi occupation in France.

Following the outbreak of World War II, Man Ray left France for the US and took up residence in Hollywood. He returned to Paris in 1951 and made the city his home until his death, in November 1976, from a lung infection.

Man Ray was responsible for several technical innovations in modern art, filmmaking, and photography. These included his use of photograms to produce his surrealist images, which  he called ‘Rayograms’, and the solarization process which he discovered with Lee Miller. His 1923 experimental film Le Retour à la raison was the first ‘cine-rayograph’, a motion picture made without the use of a camera. Ray’s 1935 Space Writing (Self-Portrait) was the first photographic light painting, pre-dating Picasso’s 1949 light paintings, photographed by Gjon Mili, by 14 years.

In 1974, Man Ray received the Royal Photographic Society’s Progress Medal and Honorary Fellowship, ‘in recognition of any invention, research, publication or other contribution which has resulted in an important advance in the scientific or technological development of photography or imaging in the widest sense.’

In 1999, ARTnews magazine named Man Ray one of the 25 most influential artists of the 20th century. The publication cited his groundbreaking photography, ‘his explorations of film, painting, sculpture, collage, assemblage and prototypes of what would eventually be called performance art and conceptual art.’

To find out more go to the Christie’s Photographs website.

The Top 10 most expensive photographs ever sold