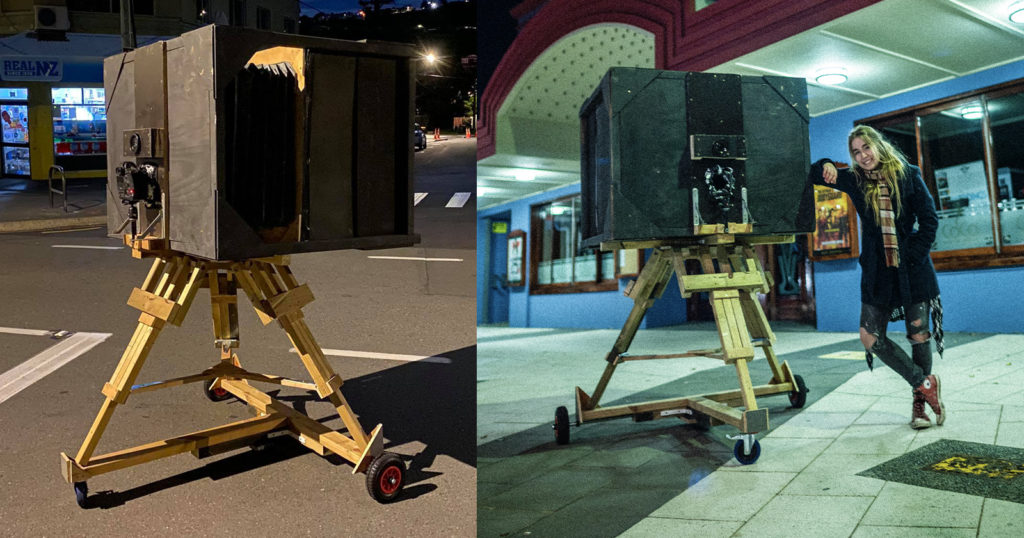 In an effort to take advantage of an old Rodenstock newspaper enlargement lens that was only being used as a paperweight, photographer Tim Hamilton has constructed an enormous “ultra-large-format” projection camera that he has used to capture unique photos and videos.

Hamilton says that the reason he built the device was to make use of the old enlargement lens that he had in his possession.

“Before I got the lens, it was being used as a paperweight, and the old photojournalists who worked at the newspaper before the digital transition were saddened by that. So someone handed it to me,” he says. “They are fairly rare and expensive lenses and it’s been begging to be made into a camera.”

Hamilton says that the lens he has is a Rodenstock 600mm f/9 APO-Ronar, which in good condition can fetch north of $900. He also says that, if he chooses, he can stop the lens down to f/255.

He got the idea to turn it into a giant camera from a story he read on PetaPixel.

“I’ll admit it’s not my idea and I saw somebody else do this on Petapixel with an 8×10,” he says.

Hamilton references the work of Ukranian photographer Olexiy Shportun, who created a digital camera system that makes photos that resemble large format film but uses a modern mirrorless camera. Inspired, Hamilton decided to use apply his Rodenstock to the same concept.

Only his camera box would have to be much, much larger.

“Because the projection distance was so small, the focal plane from the digital camera was always on tilt and we had the opportunity to reduce that tilt due to the obesity of our camera,” Hamilton says.

From photos, it’s clear that Hamilton’s device is far larger and more robust than the one that inspired it.

“Earlier in the year, some friends and I built a film set submarine and bomber plane, so we had plenty of scrap,” Hamilton says. “We learned the physics of the lens and drew them out and designed a box and bellows large and strong enough to contain such large images.”

How it works is relatively straightforward and mirrors Shportun’s design.

“Similar to any large format camera, it projects the world into a dark box but rather than use photo chemicals there is a camera mounted just below the lens filming the back ‘film plane.’ Think of it as taking a photo inside of a theatre,” he explains.

The result is an enormous camera with really only one positive and a whole host of drawbacks.

“If you are to write a list of pros and cons.. you only have one pro: The image is gorgeous,” Hamilton says. “Dark and grainy, but at 600mm the format is so large it’s like shooting with a 20mm with all the compression benefits of a zoom. The image feels like a [theatre] play. Rather than looking out at the world, it looks down on it.”

Hamilton says that the camera boasts a sensor plane that is 890 times larger than the one in a typical 35mm camera. But that comes at a cost.

“The cons are the camera is heavy,” he says. “It has broken several tripods and requires a custom tripod to hold her. Screws and staples stick out of it in every direction and threaten the user. The camera doesn’t fit through doors and refuses to get in cars.

The photos and videos that he has produced with the giant rig make it all worth it to Hamilton.

“The image feels heavy and silky,” he says. “You can see, especially with movement, that the world feels far more like a stage. Imagine if instead of three inches apart, your eyes are three feet apart. The lens is really like the eye of god.”

Below is a video clip Hamilton sent that illustrates how it renders video.

“Cinema has become ‘cookie cut.’ What we see on-screen looks almost identical these days. I think I’d love to shoot a short film on this. I work at a real niche post-production facility in Wellington — Pow Studios — so I’m in a position where every day I am encouraged to push the boundaries of imagery and storytelling, and I can see that with a good post team we could make a film that feels far more like you can touch it,” he says.

“I’m excited to keep pushing the bounds of imagery. This isn’t the last build of the camera, it will change again.”

Image credits: All photos and videos by Tim Hamilton and used with permission.