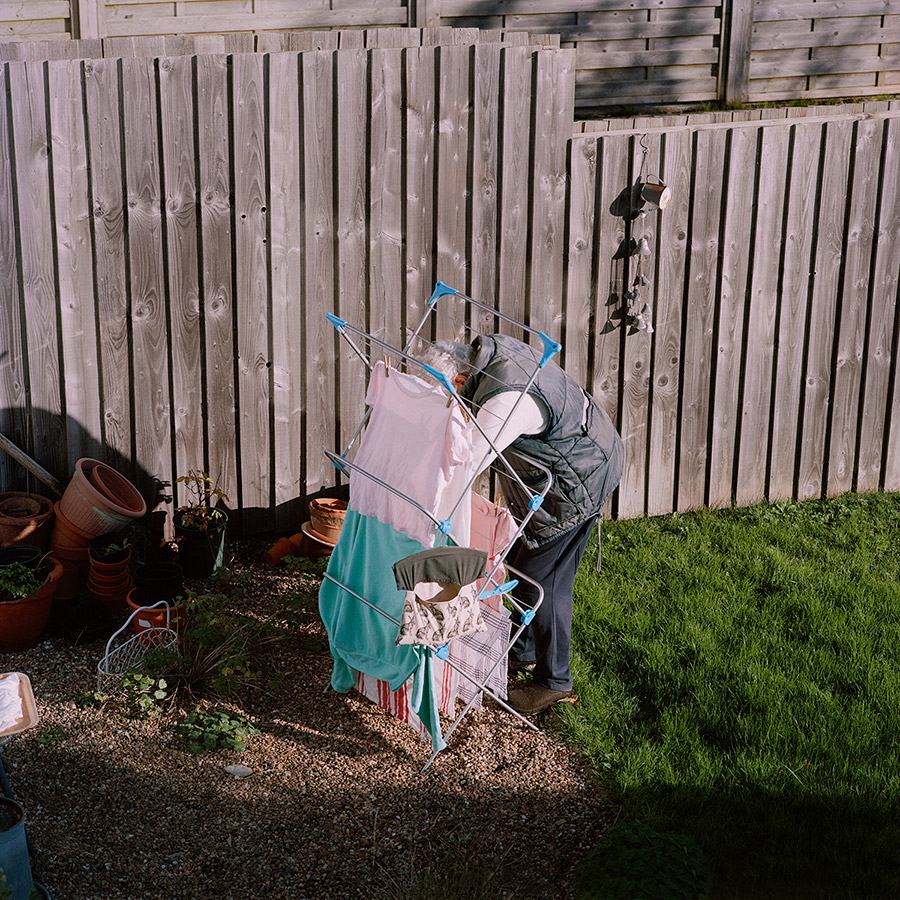 Clémentine Schneidermann has won first prize in the prestigious Taylor Wessing Photographic Portrait Prize 2022 for portraits from the series Laundry Day, which document the daily chores of her neighbour in South Wales, navigating life in lockdown. The winner of the £15,000 first prize was announced today, Tuesday 25 October, at the award ceremony held at Cromwell Place in South Kensington.

Second prize was awarded to Haneem Christian for Mother and Daughter and Rooted, which explore queerness, transness and the importance of chosen family. Alexander Komenda was awarded third prize for Zahid’s Son, a portrait that examines themes of identity and the post-Soviet landscape in Kyrgyzstan.

The winning portraits are now on display as part of the Taylor Wessing Photographic Portrait Prize 2022 exhibition at Cromwell Place, in South Kensington, London from the 27 October until 18 December 2022, while the Gallery’s building in St Martin’s Place is closed for major redevelopment works. The exhibition features 51 portraits from 36 different artists, selected for display by a panel of judges including Christina Lamb, Chief Foreign Correspondent at The Sunday Times; Siân Davey, award-winning photographer; and Shoair Mavlian, Director of Photoworks.

Clémentine Schneidermann is a French photographer, living and working between Paris and South Wales. With a focus on social documentary photography, her approach is collaborative and playful, with a particular interest in communities. She is a co-founder of Ffasiwn Stiwdio, a photography- based creative studio that creates programmes with youth groups, and in 2021, she completed a practice-based PhD at the University of South Wales, Cardiff.

Schneidermann’s delicately observed portraits from her series Laundry Day depict the artist’s neighbour, hanging laundry in the garden of her home in South Wales. Taken during another challenging year in the UK, the photographs “document micro events which deal with the passage of time through the small moments of our daily lives” comments Schneidermann. Through the obsessive photography of one daily chore, the photographer captures the everyday, remarking that “the beauty of photography is to create magic out of the simplest moments”. The socially distanced portraits are part of a series of works taken during times of quarantine, self-isolation, and national lockdowns.

The judges had an immediate response to the simplicity of Clémentine Schneidermann’s project, capturing the calm mundanity of domestic tasks. The judges felt the images evoked a strong sense of stillness and quiet, yet perhaps also loneliness and isolation, despite the proximity of the photographer. The jury praised the unusual perspective of the portraits, which are close, but not close enough to see the sitter’s face, which they felt was an intriguing play with the conventions of traditional portraiture.

Haneem Christian for Mother and Daughter and Rooted

Haneem Christian is a visual poet and activist, who was born and raised in Cape Town, South Africa. They studied Gender Studies and Environmental and Geographical Sciences at the University of Cape Town, which has since informed their body of work. Their photography focuses on representation within the Black and Brown LGBTQIA+ community.

Christian’s entries, entitled Mother and Daughter and Rooted, are photographic works from two separate series that explore queerness and transness in relation to family, race and identity. Mother and Daughter depicts Cheshire Vineyard and Autumn May, who are both trans feminine artists from Cape Town, South Africa. Christian’s photograph explores the relationship between the two, and questions “what it means to be a mother to a child who you have chosen and has chosen you”.

Christian commented that this image “is a celebration of the family we choose,” while Rooted “honours the journey of returning to the Self by seeing yourself through the eyes of a loved one”. The portrait, which depicts a figure laying back and gazing straight to camera within a woodland setting “acknowledges and celebrates the multidimensionality and sacred nature of queerness and transness rooted in precolonial knowledge of self”.

The judges felt that Haneem Christian’s portraits were particularly strong and striking while tenderly and poetically conveying complex narratives. The works were particularly praised for giving voices to communities in various cultural contexts, and for the deep trust visible between the sitters and photographer.

Alexander Komenda is a Polish-Canadian documentary photographer and artist, whose work focuses on revealing the nuances of everyday life. His interests in identity and collective memory are utilised in his practice in order to explore the boundaries between unity and division in relation to his subjects. In 2020, Komenda completed his BA in Documentary Photography at the University of South Wales, Cardiff and is currently undertaking an MA in Photography at Aalto University in Espoo, Finland.

Those who reside in the Fergana Valley are still living with the legacy of its Soviet past, and in southern Kyrgyzstan, Uzbek people continue to face significant marginalisation. This portrait dignifies the presence of Zahid and his family. The artists recalls a conversation with Zahid, in which he said, “as Uzbeks, my children could never become president or be in positions of government”.

The judges were struck by the immediacy of Alexander Komenda’s image. A striking moment captured in a simple snapshot using a flash. They admired the strength of the artistically compelling image despite the lack of narrative context provided to read the image. Which left them intrigued about the social, political and cultural context of the work.

Dr Nicholas Cullinan, Director, National Portrait Gallery said: “Congratulations to the prize-winners and to all the selected photographers. This year’s entries to the Taylor Wessing Photographic Portrait Prize demonstrate the outstanding level at which photographers around the world are approaching the art of portraiture. The final 51 selected submissions are a remarkable collection of images that reflect the competition’s international reach and demonstrate an extraordinary variety of themes and styles within the parameters of photographic portraiture. Since the launch of the Prize in 1993, now in its fifteenth year of sponsorship by Taylor Wessing, over one million people have seen the exhibition, which continues to bring the very best in contemporary photography to our audiences.”

Shane Gleghorn, Managing Partner at Taylor Wessing, said: “All of the artists in this year’s exhibition thoroughly deserve the plaudits they have received for their work because, although the images encompass many different techniques and perspectives, they are all thought-provoking. The prize has enabled artists across the world to use their talent and creativity to raise awareness in respect of a number of key issues and that makes for a powerful exhibition. My congratulations to all of the shortlisted artists and prize winners, who gave the judging panel such a difficult task this year.”

The annual Taylor Wessing Photographic Portrait Prize, now celebrating fifteen years under Taylor Wessing‘s sponsorship, is one of the most prestigious photography awards in the world. It showcases new work submitted by some of the most exciting contemporary photographers.

This year’s judging panel was chaired by National Portrait Gallery Director, Dr Nicholas Cullinan, who was joined by Chief Foreign Correspondent at The Sunday Times, Christina Lamb; award-winning photographer, Siân Davey; the Director of Photoworks, Shoair Mavlian; and the Taylor Wessing Photographic Portrait Prize 2022 curator, Eva Eicker. Judged anonymously, the diversity of styles in the exhibition reflects the international mix of entries as well as photographers’ individual and varied approaches to the genre of portraiture.

Full price tickets from £8
Concessions from £4, including an Under 30s weekend ticket

The prize-winning photographs and those selected for inclusion in the exhibition were chosen from 4,462 submissions entered by 1,697 photographers from 62 countries. A total of 51 portraits from 36 artists have been selected for display in the Taylor Wessing Photographic Portrait Prize 2022 exhibition.