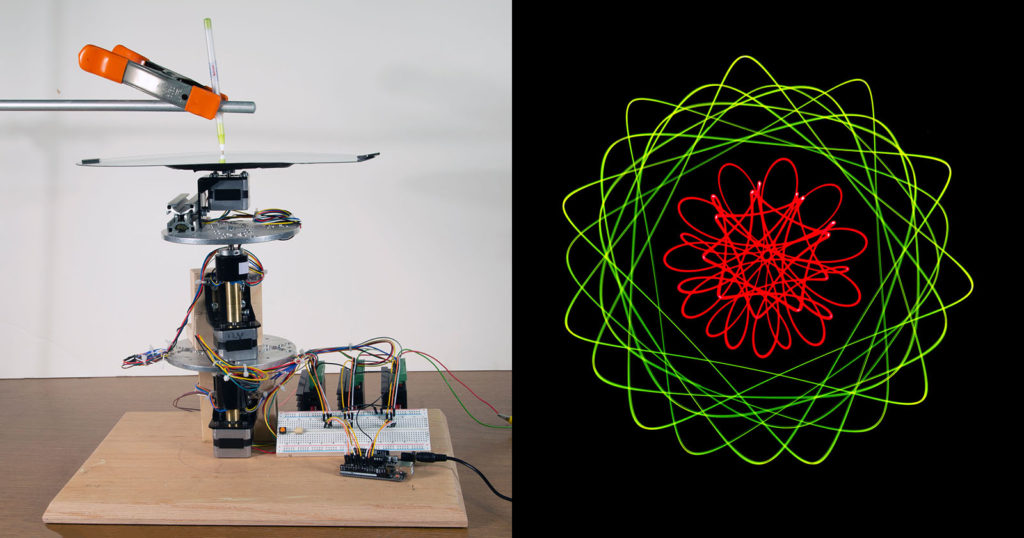 Originally, the geometric chuck was a device to make ornate patterns on a lathe. Invented in the 1860s, the device could have up to 8 layers—each driven by a central shaft.

There are several of these complex devices still in existence and on display in museums. Each layer can have a unique set of gears to control the rotational rate of the layer in response to the central shaft and be displaced a radial distance from the central shaft.

Evaluating the design, I decided to update the system and use a programable stepping motor for each layer. I limited this drawing machine to three layers because of the cost of employing slip-ring electrical connectors, which allow electricity to flow to rotating objects without twisting wires.

After experimenting with the setup for a while, the need for a simulator to help predict patterns became obvious. Since I often teach using Excel, it seemed to be the logical choice to use. The pattern created by a point on the top platter is easy to calculate. Here this pattern is recorded by placing a small LED light on the top platter and photographing the motion in a dark room.

When paper is placed on the top platter and a pen fixed to a stand (the Earth frame of reference) is used – we record a different pattern.

In this system, each of the platters can be displaced from the central bottom stepping motor that acts as a reference. Each stage can be driven clockwise or counterclockwise at any speed. The pen can be placed anywhere on the top platter. Each location will yield a different pattern, as will the angular position of the plates when the device is started. These variables all add up to make a wonderfully simple device with a vast selection of possible patterns.

The Arduino and stepping motor controllers drive the motors. The stepping motors are mostly designed to move an object from one location to a second position with positional accuracy. This modern geometrical chuck requires rotational accuracy. The current drivers work in integer steps, and I suspect the driver circuits are not as accurate as they could be.

This is sample code for wheels on wheels on wheels project
This project simulates a geometrical chuck from the 1860s with modern
stepping motors and an Arduino microprocessor.
There are three steppers used in this project all on top of each other.
Conductive slip rings are used to carry electricity to the motors on rotating
platforms.
stepper1 is base
stepper2 is 2nd level
stepper3 is third level (top)
November 1, 2020
Ted Kinsman [email protected]
Example sketch to control a stepper motor with TB6660 stepper motor driver,
AccelStepper library and Arduino: acceleration and deceleration.
*/

// Create a new instance of the AccelStepper class:

{ //these steppers move 200 steps for 1 revolution

I hope you enjoy this project. Creating designs is quite mesmerizing with this device and a wonderful way to teach a little mathematics.

References: “The Mechanical Drawing of Cycloids, The Geometric Chuck”

About the author: Ted Kinsman is the 2019 recipient of the Schmidt Laureate or outstanding contributions to the progress of biocommunications. Kinsman has worked as an optical engineer, a physicist, and a physics instructor before joining the Photographic Sciences Dept. at RIT. His work has appeared on The Discovery Channel, Crime Scene Investigations (CSI), The X-Files, South Park, The Tyra Banks Show, and The Frozen Planet series. Kinsman is currently an Associate Professor in the school of Photographic Arts and Sciences (SPAS) where he teaches Photographic Instrumentation, Scanning Electron Microscopy, and High-Speed Imaging. His most recent book is Cannabis: Marijuana under the microscope.