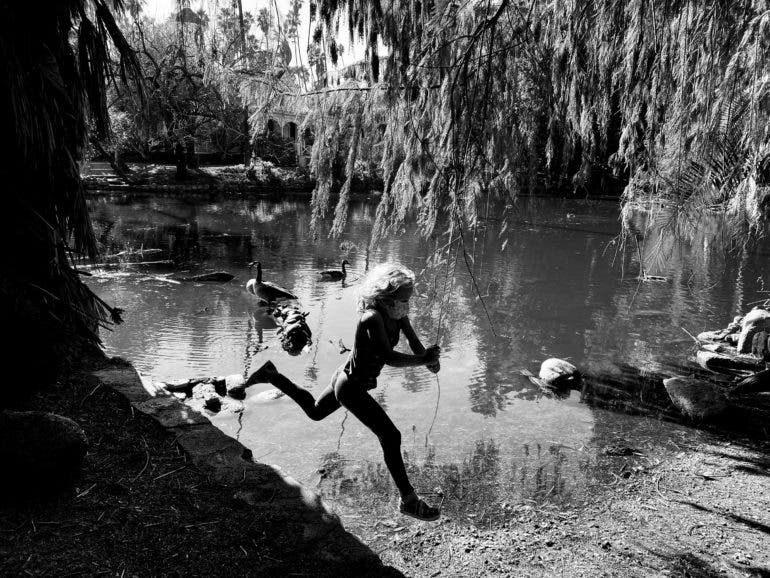 Laurie Freitag doesn’t have many photographs of herself as a young child. “It bothers me that I cannot remember much of my childhood before I was seven years old,” she tells me. She’s not alone; research suggests that most of us recall very little of that time. It’s a phenomenon known as “childhood amnesia,” and although we still don’t know much about it, we do know that the first seven years can be some of the most important and influential–even if we can’t picture them clearly.

Freitag grew up to become an artist and nanny. For more than a decade, she’s been working with the same family, documenting the children in her care as they grow up. Recently, they moved into a house in the idyllic hills of Los Angeles, where the kids have room to roam. Many of her photographs now hang on the walls of that family home. Every year, she creates a coffee table book for the parents and grandparents. Some of the pictures she shares with the rest of us through her ongoing fine art series, The Lost Years.

“I hope that the photographs I take of the children will be a great gift to them when they are older and wonder about who they were before they could remember,” she says. “When I look at the few photographs I do have of myself at these ages, I seem happy. If only I could remember more.” We asked her to tell us more about her lifelong passion for photography, her work as a nanny, and The Lost Years.

The essential gear of Laurie Freitag

“The iPhone suits my work because it’s easy to hold and jam in a pocket when my hands have to hold a child’s hand or pick them up. It makes the most sense. I also use Snapseed, a photo-editing app on my iPhone that allows me to change the images from color to black-and-white. I’m able to enhance the contrast easily too. I choose black-and-white for 90% of my work. I like how it isolates the subject from the background. Also, because I’m trying to convey a certain intimacy of mood to the story, this is the best way to do this.”

Phoblographer: How did you first get started as a photographer?

Laurie Freitag: I started shooting when I was about nine years old, but they were just snapshots of my friends and family on a simple aim-and-shoot camera that my parents had. Every year for my birthday, I asked for a good camera and ten rolls of film, but for some reason, I never got one!

When I left home at 18 for a five-month road trip across the U.S. with a boyfriend, I bought myself a Nikkormat 35mm camera and began documenting everything I saw. From the many friends and family that we visited, I really got a lesson in ‘seeing’ and was able to document lives as well as landscapes. The year 1976 was a very unusually warm winter, and we were able to stay at National Park campgrounds that were basically empty.

A few years went by, and I became obsessed with documenting my young nephews in their home environment. I always believed that the time children were small had a temporary magic to it–that soon they would be indoctrinated into society via school, and their curiosity and wonder would take a backseat to the importance of fitting in.

Phoblographer: When did you become a nanny?

Laurie Freitag: As my nephews got older and the “running to the door” as I visited became less and less frequent, I realized that I needed children in my life. I took a job as a nanny after retiring from a twenty-year stint working at a local TV news station, and it was the beginning of seriously melding my two loves: working with children and documenting them in their environments.

Phoblographer: What does your daily routine as a nanny look like?

Laurie Freitag: I have been working with one family for eleven years with their two children (ages eleven and six) in different capacities, depending on the different age needs. Because of the pandemic, working part-time became full-time when the six-year-old child’s pre-school shutdown, and he was spending all of his time at home. The eleven-year-old was busy with Zoom school, so there wasn’t much need for me there with her. Her parents were also there working from home.

Since schools reopened last month, my days went from full-time with the youngest child back to part-time with varying jobs. I rotate with picking him up from school with his mother. Some days, I pick up his sister from school. I cook for the family: dinner, after school snacks, etc. I prepare school lunch for the youngest child. Sometimes, the youngest will help me prepare part of dinner–especially if there’s a dessert or baking involved!

Phoblographer: Why do you think childhood is a theme you’ve returned to again and again?

Laurie Freitag: I am, at heart, a documentary photographer, so it made sense that I started to document my days with children. If I was working on an oil rig, I probably would have documented life on the rig!

Phoblographer: How have the kids (and you!) adjusted to life during COVID?

Laurie Freitag: I was in a unique situation. The family I worked for had moved to a very large home in the hills beneath the Griffith Observatory in Los Angeles, California, just two months before lockdown. There were swings from trees, gardens, hills to roll down, and areas to run back and forth up and down.

The parents took full advantage of the outside by organizing a playgroup with five families. Two to three times a week, there were children running, climbing, screaming, and laughing. And because of the moderate weather, there weren’t many days that the children weren’t able to play. With access to more children during Covid, I was able to document more children, adding many more images to my project.

Phoblographer: To what extent is this project a collaboration? Do the children ever come up with ideas for your photos or guide you in a particular direction?

Laurie Freitag: The best images, for the most part, are the ones where the children are not aware that I’m shooting. Because I’m trying to capture their private moments, me trying to get their attention would be like pushing a pin into a balloon! I don’t want them to be aware of me. I shoot quickly also because these moments are really just that: one to two seconds. I have to anticipate what is happening and shoot fast.

Phoblographer: What is your most indelible memory from your years working on this project?

Laurie Freitag: I could not choose any special moment that stands out from the others. The point is that there are countless moments that are not documented. My hope would be that parents would learn to appreciate these moments that are temporary and allow children the freedom to express themselves and explore their worlds. A takeaway for parents might be for them to examine their priorities and see how important play is–not only for children but for them as well.

Phoblographer: The Lost Years focuses on kids under seven. What inspires you about this age?

Laurie Freitag: The thing that most inspires my photographs is that the children (under the age of seven) are unaware of the camera. They are in their own world, and they don’t see the limitations within their environment that adults might see. Their environment becomes almost a part of them, or an extension of their joy.