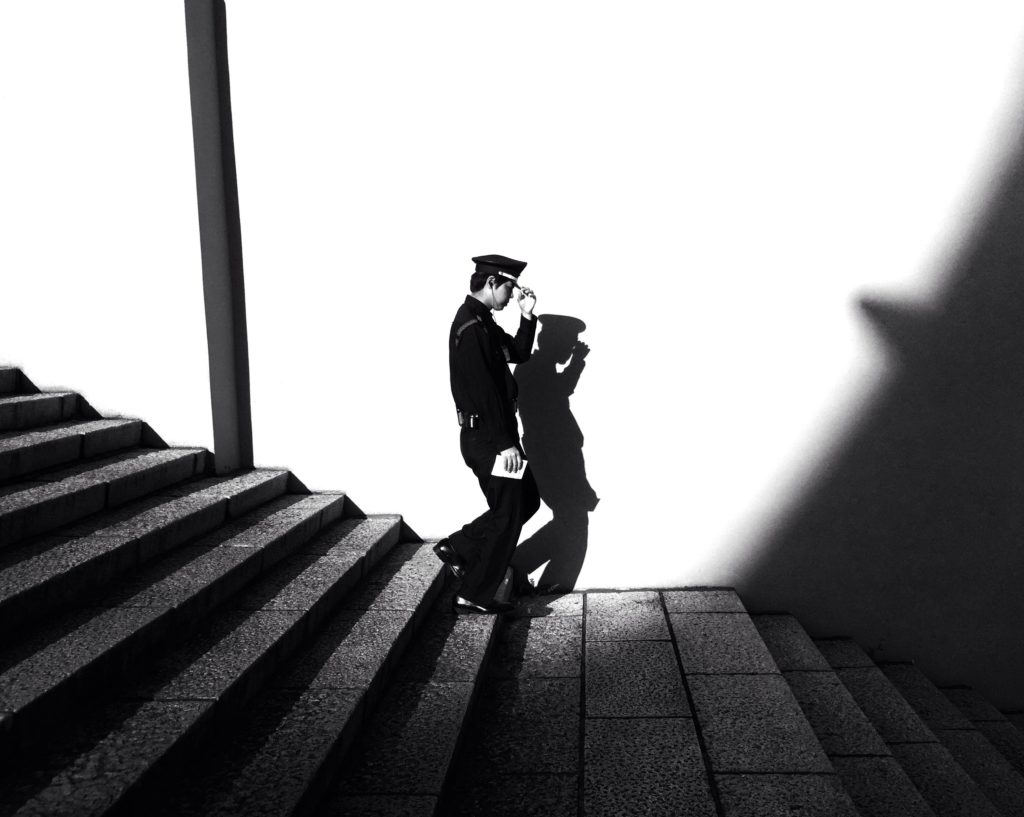 “Fatherhood has shaped my perspective,” the Tokyo-based photographer Laurence Bouchard tells me. “Having a daughter has changed the kind of places I visit, and without a doubt, I’ve found some very cool locations that I would never have been to otherwise. My wife usually works on Sundays, so I make a deal with my daughter: we go somewhere that interests me and somewhere she wants to go.”

Editors Note: Some readers are bound to find some comments made by Laurence controversial. The Phoblographer understands that. And while none of the statements made by Laurence reflect the views of the publication, we still feel it’s fair, and safe, to give him a platform to discuss his photography.

Bouchard’s black and white street photography evokes a keen sense of wonder and adventure–one felt often in childhood but forgotten as we grow up. His pictures, made mostly in Japan, speak to the joys of chance encounters, the anticipation of going someplace different, and the mysteries of strangers in the city. In his world, ordinary scenes thrum with the possibility of discovery.

“One magical moment for me was photographing my daughter at the Opera City in Shinjuku,” the artist says. “She was at that age when everything was new, and the photo had a real sci-fi feel to it.” That idea of rediscovering daily life anew, as if seeing things for the very first time, runs throughout Bouchard’s work. You can find it in the umbrella-clad pedestrians, the blissful beachgoers, the commuters with briefcases, and the bicyclists in motion.

Laurence Bouchard was recently named Mobiography Photographer of the Year 2021 as part of the Mobiography Awards. We had a chance to ask him a few questions about his city and his work.

The essential gear of Laurence Bouchard

“I would say having a choice of cameras is key to the work I do, as I also have a Sony A7rii in addition to the iPhone. What I will say is I like to shoot with both and see which images I prefer when I get home. Having said that, the smartphone is always with you, and carrying an SLR around all the time isn’t always practical and can be tiring.  I have felt some frustration with the wide-angle of the iPhone 10, but my wife has the iPhone 12, and I love the wide-angle on that.  I’m thinking of updating to the iPhone 13 for the cinematic video soon.”

Phoblographer: What brought you to Tokyo, and what is it about this city that inspired you to become a photographer?

Laurence Bouchard: I met my Japanese wife while living in London. She had to return to Tokyo to start a job there, and after a few visits, I decided to make the move. Before moving to Tokyo in 2009, I hadn’t had a camera for about ten years after breaking my film camera. I got my first iPhone when I moved here and realized the potential it had for photography.

Initially, everything in Japan felt fresh, which helped a lot. I never set out to become a photographer. It was more something that I stumbled into and became more passionate about.  One thing that inspired me was the rainy, neon-coated Blade Runner scenes I’d encounter on my way home from work. The other was the abundance of interesting modern architecture coupled with a lot of strong sunlight.

Phoblographer: You were recently named Mobiography Photographer of the Year as part of the first Mobiography Awards, with top honors in the street and urban category going to your photo Vacant Vacation. Could you share the story behind this photo?

Laurence Bouchard: That was shot in April 2020 during the fifteen days to flatten the curve. I cycled to Shinjuku and shot the crossing from above. Usually, it would have been really busy but, due to the situation, it was pretty dead. I shot some with my Sony camera and then some with the iPhone. Luckily, as I shot with the iPhone, this guy crossed with a suitcase, and I really loved the shot when I got back home. In fact, there was hardly any editing required.

At the time, there was all this fear about coronavirus. There still is. I was hearing predictions that Tokyo would be the next Wuhan. But it was during this time that I realized that the pandemic was, in fact, a plandemic. We’ve gone from fifteen days to flatten the curve to vaccine passports.

I know that a lot of people reading this will react angrily–like I’m a conspiracy theorist or an anti-vaxxer.  However, when I see the situation in Canada and Australia and see people there writing S.O.S posts on Instagram, I feel, as a human being, that it’s only right to highlight this. And this also affects photography, as I see what is happening now as an attack on art and culture.

Phoblographer: One recurring motif in your work is a small, lone person in a vast cityscape, as in Vacant Vacation. Why do you think you return to this theme, and what does this motif represent to you?

Laurence Bouchard: Well, the human element just makes the photo more interesting and provides a sense of context. It’s also aesthetically more pleasing to look at from a kind of minimalist perspective. I prefer to leave the interpretation or meaning behind these lone figures to the viewer. I just find it striking visually.

Phoblographer: Rain is another recurring theme throughout your body of work. What inspires you about “bad weather,” and what do rainy days symbolize to you?

Laurence Bouchard: Bad weather is a photographer’s best friend. As a photographer, you always want to include a few elements or layers in every picture. And rainy or snowy days give you that. For a lot of photographers, umbrellas are also key. They’re like these magical elements that make the photos so much more interesting. Personally, I’m not sure what they symbolize. But they offer a lot of options.

Phoblographer: How do you choose which photos to convert to black and white? And what editing app do you use to bring them to life?

Laurence Bouchard: With the iPhone, I always have it set to noir, and that’s fine, as I can always change it afterward. But it just depends on the location. In some locations, the color is amazing, and I will go with that. Snapseed is the main app I use. These days, I try to limit the amount of editing as much as possible. Less is more.

Phoblographer: Many photographers avoid harsh daylight, but you embrace it. Why?

Laurence Bouchard: Well, it depends, but I like the contrast that comes with harsh daylight. Some locations work well in harsh daylight. But since I have a daughter, I’ll sometimes wake up at 6:00 AM and shoot early in the day and then get back in time to do the kindergarten run.

Phoblographer: Most of the figures in your photos are far away, but it looks like you got closer to two of these people: a man in sunglasses and a hat and the woman in the window. What drew you to these people?

Laurence Bouchard: I saw the man in the sunglasses during a photography workshop I joined in Hoi An. Hoi An is a photographer’s paradise, and the people are really kind. During the workshop, we stopped at a traditional house, but to be honest, I got a bit bored and wandered outside. And I saw this guy approach and thought, “Wow, he looks amazing.” I got in front of him a couple of times, but he seemed completely oblivious to me.

The woman in the other photo is my wife. We were traveling to Kyoto on the bullet train. The inspiration for that photo was from a scene in Lost in Translation, a favorite film of mine.  There’s a scene where Scarlett Johansson is on the bullet train, and I wanted to recreate something similar. In the end, it came out quite different, and that’s one of the cool things about copying something. You often end up with a different result.

In general, though, I rarely approach people and prefer to shoot them from a distance. I prefer shooting with a sense of scale.

Phoblographer: How has your relationship with Tokyo evolved in the last decade?

Laurence Bouchard: Well, having a child has changed my relationship with the city.  It has resulted in access to locations that would have probably been difficult otherwise. In the last few years, there has been a massive amount of renovation, and that’s partly due to the Olympics.

Unfortunately, I think, from a photographer’s point of view, that has been for the worse. I was running workshops via Eyexplore before the coronavirus situation, and one of the founders, Lukaz, wrote a great blog article about this subject. He writes about how photographers can record the city as it is now before it changes forever–as a way of preserving it for the future.