Lalo de Almeida Documents the Exploitation of the Amazon 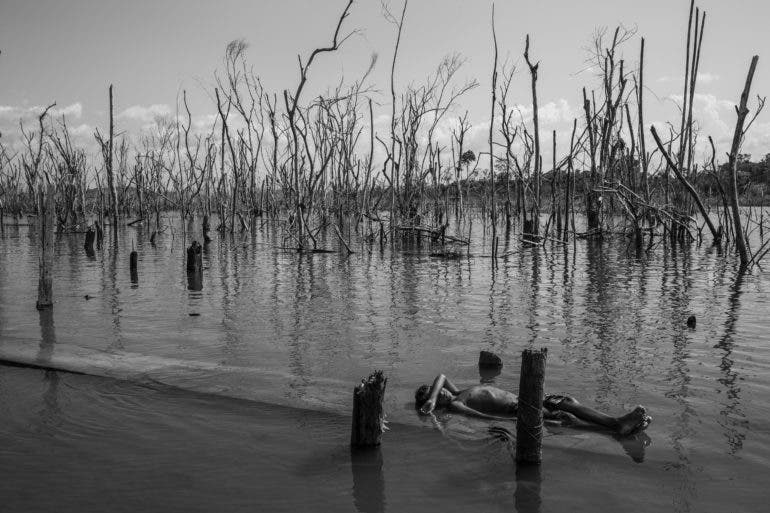 “One of the most fascinating figures I encountered in the Amazon was Mr. Benedito Balão, a man who lived on the banks of the Xingu River,” photojournalist Lalo de Almeida tells me. By the time they met, the older man was already in his seventies. Construction had just begun on the Belo Monte Dam, a hydroelectric mega-project in the Amazon basin that would result in the displacement of tens of thousands of people. When de Almeida introduced himself, Mr. Balão was actively protesting the building of the complex.

For more than a decade, the photographer has seen the Belo Monte project and others reshape the landscape beyond recognition. He has witnessed the exploitation of the region, host to an estimated three million plant and animal species, through logging, mining, and dam building. “Every year, I would stop by to visit Mr. Benedito Balão and follow his struggle to remain on his land on the riverbank,” de Almeida remembers. “But in 2013, when I arrived at the site, I found only the ruins of his house. He had resisted for four years, but the pressure of money had been stronger.”

Mr. Balão was compensated for the sale, but he only received enough money to purchase a piece of land more than 100 kilometers away. “His way of life, totally connected to the river, had been destroyed by Belo Monte,” the photojournalist explains. In 2014, he returned to find Mr. Balão camped on an island in the river where the ruins of his house had stood a year earlier. Spending time there was the only balm he’d found to soothe the ache of homesickness. After the move, Mr. Balão struggled with depression, and passed away a few years later.

De Almeida, for his part, has continued to cover life in the Amazon ever since, tracing the stories of the people who’ve called this land their home for generations. He has photographed the burning of the rainforest to make way for cattle grazing, the consequences of a warming climate, the illegal grabbing of indigenous lands, and the displacement of families. This summer, his ongoing project Amazonian Dystopia was named a Finalist for the 2021 W. Eugene Smith Memorial Grant, given in recognition of photographers whose work follows the humanist tradition of W. Eugene Smith. We asked him more about his work in the region.

“I am not a gear fanatic, and I try to be as objective as possible when packing. I like to travel light and be discreet. I don’t like to dress up as ‘a photographer’ with a lot of stuff hanging around. 98% of my work I do using a 35mm fixed lens or a 24-70mm zoom lens. I have been a Canon user for a long time and am currently using the R5. I have also been using the drone a lot lately. The quality is not wonderful, but in these stories involving environmental issues, the drone helps give scale.”

Phoblographer: How did you get started as a photojournalist?

Lalo de Almeida: My beginning in photography was recording my travels as a teenager. I started to publish my work in magazines and realized that this could be a way of life, a profession. I decided to study photography in Milan, where a brother of mine was already living. My plan was to be a nature photographer, but the first job I got in Italy was as a photographer for a small photojournalism agency that covered the city’s news.

I would listen all day to the police and firemen on the radio, and when something happened, I would take off with my Vespa to shoot. I would go back to the agency, process the film, edit, and make the prints. And then I would even visit the newsrooms of the newspapers to sell the pictures. It was a great way to learn. I fell in love with photojournalism and abandoned the idea of doing nature photography.

Years later, I came back to live in Brazil. I wanted to photograph my country, which in truth looks like a continent. And living here, I know that the story of the relationship between man and nature, this conflict between preservation and occupation, is part of the very history of the country. So it seemed natural that my work would also go in this direction. It was also a way to unite photojournalism with my desire to maintain contact with nature.

Phoblographer: How much time have you spent with the communities living in the Amazon region? Why do you think they trusted you enough to allow you into their lives?

Lalo de Almeida: I have been documenting the Amazon for over 20 years, but it was from 2009 that I focused my work with more intensity in the region. This coincided with the beginning of the construction process of the Belo Monte hydroelectric plant on the Xingu River, which was completed last year. In 2013, at the height of the construction and the chaos in the region, I spent most of the year in Altamira, the city most affected by Belo Monte. Since then, I have been visiting the region at least once a year to monitor Belo Monte and its socio-environmental impacts.

I have also done many other projects in the Amazon, on varied themes, addressing the issues of deforestation, illegal mining, invasion of protected areas, and the impact of these large infrastructure projects. This intense, long-lasting, and regular contact with the local communities has opened many doors for me. The worst thing is what I call a “parachuting” approach, where a photographer suddenly arrives, does their work, is allowed into people’s lives, and then disappears. That is exactly what I’ve tried not to do.

Phoblographer: Could you tell us about the factors that have led to the continued exploitation of Amazonian resources? How has this been allowed to happen?

Lalo de Almeida: The history of the Amazon has always been one of predatory exploitation, both of natural resources and of traditional populations. From colonial times to the present day, Brazilian society itself still treats the Amazon as a colony that supplies raw materials (minerals, wood, energy) without caring about local development and the well-being of local populations. It is almost as if the Amazon doesn’t belong to the Brazilians.

Over the years, and especially during the military dictatorship, an image was constructed that nature is the enemy of development and that the indigenous people are an inferior civilization. This remains in the minds of many Brazilians to this day. President Jair Bolsonaro is the voice that best represents this thinking today.

Phoblographer: What is being done to stop this exploitation? Are there NGOs or local community groups working on the ground?

Lalo de Almeida: Truly, very little. Both the government agencies responsible for combating deforestation and protecting the indigenous populations and the NGOs are being destroyed by the current government. The only positive progress that I can see today is that the indigenous communities are much more organized and strengthened. They are the ones who can make a difference in the preservation of the Amazon.

It is precisely because of this strength that these indigenous leaders are also the most exposed. Some indigenous people have been assassinated; many are being threatened or have suffered some kind of attack. The advantage is that now they are all connected, even worldwide. When anything that happens to them, everybody knows about it quickly.

Phoblographer: This project was shortlisted for the 2021 W. Eugene Smith Fund Grants. What do you hope for as the work gains traction with an international audience?

Lalo de Almeida: I feel that Brazilian society, outside of very specific bubbles, doesn’t have much interest in what is happening in the Amazon. I think that if there is any kind of pressure for the preservation of the forest, it will come from outside, from abroad. This is why it is very important to take this work to an international audience.

Phoblographer: What is it about this place that inspires you to return time and time again?

Lalo de Almeida: I have a love-hate relationship with Amazonia. Perhaps hopelessness is more accurate than hatred. I know that I should have a more optimistic rallying cry to help mobilize people in this fight for the preservation of the forest. But after 20 years of photographing the region, it seems that things only get worse, and it is hard to maintain hope. I don’t think my photos will make much difference; after all, I have been publishing these images for a long time, but I haven’t seen any change.

At the same time, I still see everything that is happening. I get so indignant that I cannot turn my back and accept this situation. I feel an obligation, especially as a Brazilian, to continue to show what is happening in the Amazon. It’s like I’m on a mission. And so I go on between commitment and hopelessness. I will only stop photographing the Amazon when my energy runs out.

Phoblographer: What’s your single, most vivid memory from your years working in the Amazon? Anything you’ll hold onto for the rest of your life?

Lalo de Almeida: That’s a difficult question. There are many moments, many memories, many encounters. But one of these special situations I experienced was when I met the Pirahã Indians camped along the Transamazon highway. They are a semi-nomadic people, who move around their territory, and although they have had contact with the white man for more than 200 years, they refuse to speak Portuguese. Spending a few days with them camped on the banks of the Maici River was an incredible experience.

Phoblographer: You’ve heard people, including those in power, deny the existence of climate change for as long as you’ve been working on this project.  What is one memory you’d share with them, if given the chance?

Lalo de Almeida: I wish they had walked with me through a deforested area in the Bom Futuro National Forest in Rondônia, one of the most deforested Brazilian states in the Amazon region. Centennial trees charred as far as the eye can see. An apocalyptic scenario. You can’t think this is normal.

Top photo: A boy plays with his dog in the Paratizo community, on the banks of the Xingu River, near the Belo Monte dam. Tooth-like patches of dead trees surround the place after the flooding of the reservoir, an area of nearly 516 kilometres squared. The rotting vegetation releases methane gas and is more harmful to the greenhouse effect than carbon dioxide. © Lalo de Almeida/Folhapress/Panos

All photos by Lalo de Almeida. Used with permission. To learn more about Lalo de Almeida’s critically important work in the Amazon and beyond, visit his website. Be sure to follow along on Instagram at lalodealmeida. Learn more about the finalists of the 2021 W. Eugene Smith Grant for Humanistic Photography by visiting the W. Eugene Smith Fund website.